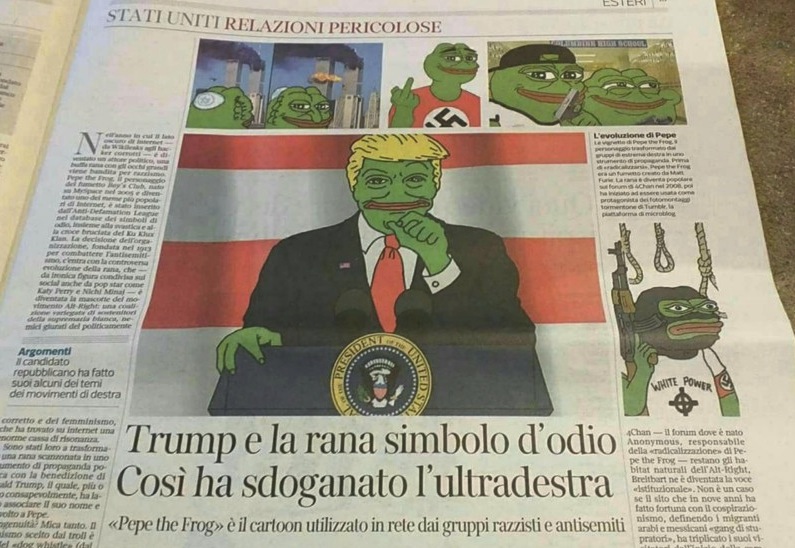 Dale Beran investigates the pivotal role 4chan played in the rise of Trump, Anonymous, and the new radical right, for Medium.

1. Born from Something Awful

Around 2005 or so a strange link started showing up in my old webcomic’s referral logs. This new site I didn’t understand. It was a bulletin board, but its system of navigation was opaque. Counter intuitively, you had to hit “reply” to read a thread. Moreover, the content was bizarre nonsense.

The site, if you hadn’t guessed, was 4chan.org. It was an offshoot of a different message board which I also knew from my referral logs, “Something Awful”, at the time, an online community of a few hundred nerds who liked comics, video games, and well, nerds things. But unlike boards with similar content, Something Awful skewed toward dark jokes. I had an account at Something Awful, which I used sometimes to post in threads about my comic.

4chan had been created by a 15 year old Something Awful user named Christopher Poole (whose 4chan mod name was “m00t”). Poole had adapted a type of Japanese bulletin board software which was difficult to understand at first, but once learned, was far more fun to post in than the traditional American format used by S.A., as a result the site became popular very quickly.

These days, 4chan appears in the news almost weekly. This past week, therewere riots at Berkeley in the wake of the scheduled lecture by their most prominent supporter, Milo Yiannopoulos. The week before that neo-Nazi Richard Spencer pointed to his 4chan inspired Pepe the Frog pin, about to explain the significance when an anti-fascist protester punched him in the face. The week before that, 4chan claimed (falsely) it had fabricated the so called Trump “Kompromat”. And the week before that, in the wake of the fire at Ghost Ship, 4chan decided to make war on “liberal safe spaces” and DIY venues across the country.

How did we get here? What is 4chan exactly? And how did a website about anime become the avant garde of the far right? Mixed up with fascist movements, international intrigue, and Trump iconography? How do we interpret it all?

At the very beginning, 4chan met once a year in only one place in the world: Baltimore, Maryland at the anime convention, Otakon. As a nerdy teen growing up in Baltimore in the 90s, I had wandered into Otakon much like I had later wandered into 4chan, just when it was starting. I also attended Otakon in the mid-aughts when 4chan met there, likewise to promote my webcomic.

As someone who has witnessed 4chan grow from a group of adolescent boys who could fit into a single room at my local anime convention to a worldwide coalition of right wing extremists (which is still somehow also a message board about anime), I feel I have some obligation to explain.

This essay is an attempt to untangle the threads of 4chan and the far right.