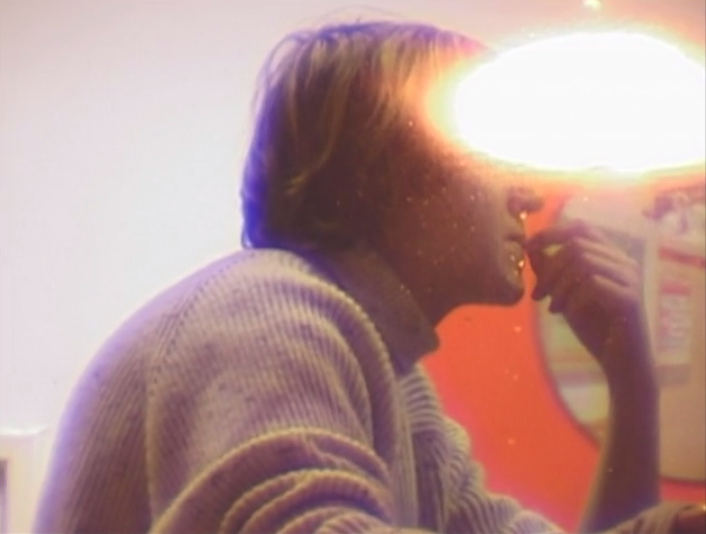 A companion piece written with and at an appropriate distance, here is Lauren Elkin in response to Dryden Goodwin’s short film Closer for White Screen.

You can make someone look at you if you stare at them long enough. So I learned many years ago riding the bus to summer camp, staring down the motorists on the Long Island Expressway. I’d press my nose to the plexiglass windows and bear down on them with my eyes. Invariably the man in the blue Toyota would turn his head quizzically to the left, and up to my level.

What is the power of the gaze, that it defies the laws of physics, pierces through our blind spots, emits a signal that registers on some extra-sensory frequency?

It’s an invitation. A request to its object to be transformed into a recipient, and therefore an agent. But not, necessarily, to be reciprocated.

Is it always a display of power? Is there always something dominating, or even sleazy, about looking? Is that why we look back, our brains hard-wired to repel the invasive stare? What do you want? What are your intentions? What are you looking at? the receiver of the gaze demands.

Does the gazer even know?

The social psychologist Ilan Shrira, in Psychology Today: ‘That ESP-like feeling you get when you’re being watched is your brain telling you, in a barely perceptible way, that something meaningful is happening.’

‘I imagine a Parisian building with its façade removed, so that from the ground floor to the attic, all the rooms in the front are instantly and simultaneously visible.’ This was Georges Perec’s idea for his Oulipian masterpiece Life a User’s Manual (1978). Perec was inspired by a Saul Steinberg drawing, a cross-section of a New York lodging-house allowing the viewer to see into its twenty-three rooms. Onto this quintessential New York building Perec superimposed his Haussmannianimmeuble, adding yet another layer all his own: a 10 x 10 chessboard onto which he plotted a series of moves following the knight’s path, in order to explore all the spaces in this building on the fictional rue Simon Crubellier, joining Zola’s Pot-Bouille in the (small) canon of great French novels about apartment buildings and executing the art of constraint on a previously unrealised scale.

I, on the other hand, imagine a building with the façade on. I imagine a glimpse of what happens inside.

Not a prurient peep. Not an unveiling like the naked man I once saw in his brightly lit, curtainless Hoxton flat in one of those modern glass buildings overlooking the canal with the huge floor-to-ceiling windows, a very expensive fishbowl. I was with a group of friends, walking home after dinner. We stopped and looked and some of us turned away and some of us kept looking, to see what would happen with the woman waiting for him in the next room.

More like a sudden drawing back of a curtain, or a world half-visible in the gap between its drape and the edge of the window. Like the sudden appearance of my neighbour across the street in my old apartment on the Left Bank, who would open the doors of his French window, move his desk up in between them, and set to work on his model aeroplanes. At least I think they were model airplanes; I could never see quite well enough to make out what he was gluing together.

Not long ago I saw a beautiful book called Vis-à-Vis in the bookshop by my flat. It was a collection of photographs by an American artist, Gail Albert Halaban, of people inside Parisian buildings spied through their windows. Halaban shot from a safe distance. She doesn’t zoom in too far, just enough so that the faces come into view, no closer. She’s interested in the world, in the context, not in the interior life of an individual but the interior life of a home.

It’s a good title, vis-à-vis. It means face-to-face, though we use it in English to mean ‘in relation to.’ But in the context of French real estate, it means you can see into the apartment across the street, or next door. It is generally considered undesirable to take an apartment with a vis-à-vis. We might be caught off-guard, unprepared to be seen. The intimacy of the private sphere might be breached. Those of us in our vis-à-vis apartments, we hang curtains.

Halaban’s photos are so beautiful they’re suspect; there’s something apartment porn-y about them that makes them attractive but diminishes their power. (The antithesis of Halaban’s photos? Kima’s window moment in The Wire. Good night hoppers. Good night hustlers.) Those perfectly weathered Parisian buildings, distressed without having known too much distress, their biscuit-colored stucco topped with grey zinc rooftops, gabled to make room for maid’s room windows sous les toits. Some haughty, Haussmannian, with well-manicured inhabitants. Some short and stodgy with artists inside, judging from their clothes and their musical instruments. It’s not clear if the book is for Parisians to ogle each other or for the rest of the world to ogle Parisians. I don’t think it can be both.

I do a bit of looking around on the internet and find the shoots were all staged; everyone in the photos knew they were being photographed, had given their permission. That takes something away from them. We want to look in at people caught unprepared; if we open a book called Vis-à-vis it’s at least partly for the surprise of coming face-to-face. Or at least, to be faced with their face, without their having seen ours.

I found a video where Halaban explains what she was up to, anticipating allegations of voyeurism. ‘Some people think it’s creepy,’ she says. ‘But if you look at my photos of Paris you will realise I’m a friendly window watcher.’ In art, perhaps we want our window watchers to be less friendly; perhaps friendliness is the enemy of brilliance. Outside of art, we don’t want to be caught off-guard. We want to be the masters of our photographic profiles, curating our feed, beefing up the filters and retouching the flaws. We want to control the gaze when we are its object. But is there room in the cityscape for a watcher who’s not an artist, but not a voyeur, either?

Whether or not the people inside are performing their inside-ness, the photographs are striking visual vignettes with an aesthetics, and a politics, of surface. Whether art has to violate the surface is a matter for reflection.

I have a Gustave Caillebotte postcard I bought many years ago, before I moved to Paris, of zinc Parisian rooftops in the snow, and I kept it by my desk for years before I moved here, alongside another Caillebotte, the one of the workers stripping wooden parquet. (Caillebotte’s paintings are looked down on by the same people who dismiss things as too attractive. The discerning are suspicious when they feel aesthetically pleased.)

I kept them by my desk that way to make myself work harder, so one day I could have a view of the Parisian rooftops. Now that I’m here, I’m perennially hoping the next flat I live in will have that perfect view.

I want to see rooftops but don’t want to live in a tall building. I grew up in New York and have lived at many different heights in the city, once as high as the 26th floor. In New York, the higher the floor, the higher the price per square foot. In Paris it’s more complicated. You don’t want to live too close to the ground (a rez-de-chaussée will always be a difficult proposition on the market), but you don’t want the top floor either, sous les toits, under the aluminum rooftops, which are badly insulated, hard to heat in the winter, and will cook you in the summer. At what height it is acceptable to live is a question of experience and savoir faire. But I think the reason we don’t want to live up so high in Paris is because we’d be the only ones up there for miles, or meters, we’d lose our relation to other buildings – and why do we live in cities, if not to be in relation to others? In New York, up on the 26th floor, you have other aerie-neighbours.

I want to be high enough to see the rooftops but not New York high. I think what I’m looking for is an apartment on the top of a hill.

Where we live now overlooks where two roads come together to form a V, with our five-storey building on one arm, and another on the other, joined in the middle by a squat two-storey building in the shape of a triangle, like the Flatiron in New York, but less remarkable in a city built on the spokes of a wheel. We live on the fifth floor with an elevator but no balcony, because this is not a Haussmannian building. We are under the toits. It doesn’t matter too much because this is only temporary, a sublet until we can find a place to buy. As the dusk falls blue and the lights warm up yellow it’s like living in one of Halaban’s photographs, looking across our neighbour’s roof to the people filling the other building. At night the dark compresses, brings us closer together, while the light draws our attention, a lens-less zoom. From our height we can see into so many windows at once. A woman in a red sweater watching TV. A figure moving around behind a glazed window – a bathroom perhaps? There’s the trendy man and woman whose turquoise chair I once photographed because I liked the way it looked against their rustic wooden table. I hoped they wouldn’t spot me; how would they know I was not leering, but admiring?

Halaban cites Baudelaire’s poem ‘Windows’ as justification for her project. ‘What we can see out in the sunlight is always less interesting than what we can conceive taking place behind a pane of window glass.’

But sometimes what we want to see is nothing more than the pane of glass. Or more precisely, the composition within its frame. We don’t only want to look beyond it, we want to look at it. Who knows what we are seeing when we catch sight of our neighbours? Who are we to look past their surface?