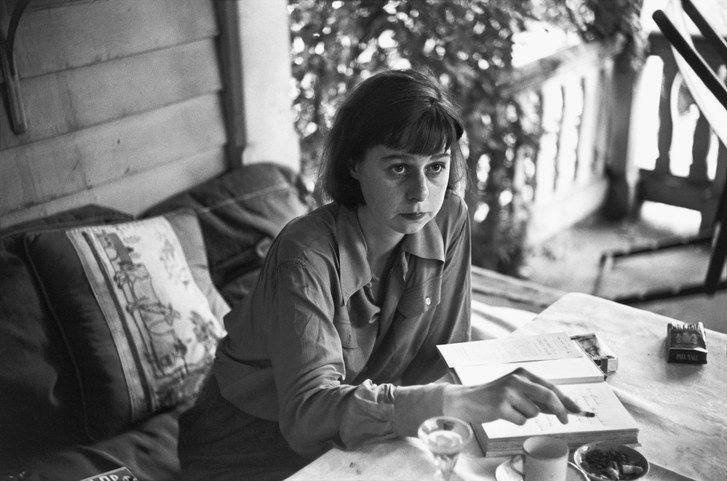 Patricia Lockwood on Carson McCullers for the London Review of Books:

She was born Lula Carson Smith in Columbus, Georgia in 1917. Her father, Lamar Smith, was a jeweller who was forever tinkering with watches. Her mother, Marguerite, a more vivacious personality, had intended to name her baby Enrico Caruso and bragged to visitors that Carson cried in tune. Marguerite, in the traditional mould of stage mothers in places where stages are hard to come by, believed that her daughter was extraordinary in some unspecified way. She was so set on her being a genius that she was not in the least taken aback when she actually became one. Carson was primed to like applause. ‘In our old Georgia home we used to have two sitting rooms – a back one and a front one – with folding doors between. These were the family living rooms and the theatre of my shows.’

These entertainments were produced out of stultification. All of her longer works are set in the South, and they are sick with not just a small town atmosphere but an inside-the-house one: the nausea and the stuckness you feel when you have looked at the same things for too long – a braided rug, a tear in the screen door, a bust of Brahms, the water oiling itself between brown riverbanks. Under the tutelage of Mary Tucker, perhaps the first woman she ever loved romantically, she practised the piano for hours a day, repeating the same tricky passages until she was a general menace to the neighbourhood. After a bout of rheumatic fever in her mid-teens, she resolved to trade in one set of keys for another, and her first published story, ‘Wunderkind’, is about a girl training to be a concert pianist who suddenly ceases to be able to play well. As an artistic study, it is terrifying. It is about a body that simply stops being able to produce the insight it has been used to.

She escaped Columbus as soon as she could, fleeing to New York at 17 with a large sum of money – though the money, along with the real story behind its disappearance, was lost almost immediately on her arrival. In the summer of 1935, she met a charismatic and literary-minded soldier called James Reeves McCullers, Jr. They married when she was 20 and he was 24, and set up house in North Carolina. The detail that somehow sticks with you is that she wore knee-high socks to the wedding.

At first glance, Carson and Reeves seem like the last people who should have entered into a heterosexual covenant. Despite Carson’s remark that Reeves was the best-looking man she had ever seen, she confided to a friend later in life that she hated sex with men. Instead, she pursued women. Here is Carson falling so in love with the Swiss adventurer Annemarie Clarac-Schwarzenbach that she dedicated Reflections in a Golden Eye to her; here she is lying down in front of Katherine Anne Porter’s door at Yaddo; here she is hopelessly infatuated with a random ballerina she saw one night on stage. Here is Reeves entangled with various young women; here he is falling in love with David Diamond, a composer who was a shadow figure in their marriage.

I am thinking of a place called 7 Middagh Street, a fairytale brownstone in Brooklyn Heights whose back windows looked out onto New York Harbour and the Brooklyn Bridge. It was demolished in 1945, but for a while during the Second World War it functioned as a sort of filthy, alcohol-soaked salon. It was the brainchild of George Davis, the loose cannon former fiction editor of Harper’s Bazaar, and for a while housed such diverse inhabitants as McCullers, W.H. Auden, Benjamin Britten, Gypsy Rose Lee, Paul and Jane Bowles and Richard Wright. (Auden seems to have been an especially terrible housemate, complaining about excessive use of toilet paper and telling people their colds weren’t physical but mental.) Carson was one of the original members; she arrived during her first separation from Reeves, who often hung around towards suppertime, wistful and drunk and disgruntled. While Gypsy worked on a mystery called The G-String Murders and Auden and Britten collaborated on a very bad opera about Paul Bunyan, Carson haunted the halls with a thermos full of a tea and sherry concoction she called ‘sonnie boy’ and chiselled away at the book that would become The Member of the Wedding.