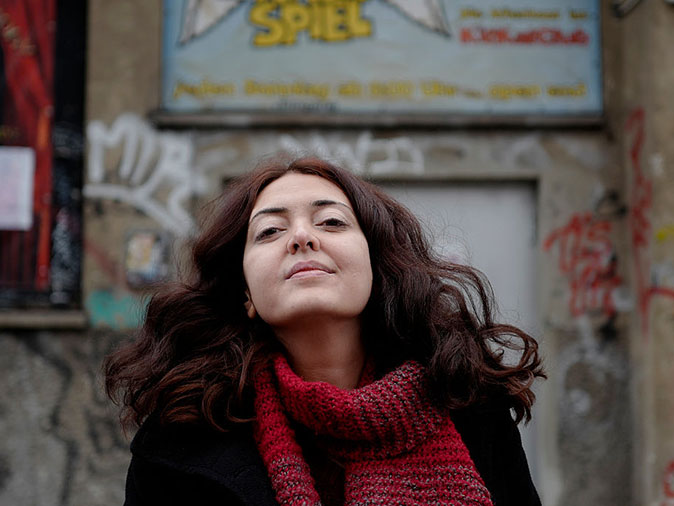 Raphael Cormack writes for The TLS about the cultural development of the new Arabic diaspora:

“Berlin is the new capital of the Arab world”, someone joked with me on my last visit to Cairo. They have a point. Over the past five years, we have seen the movement of large numbers of people from the Arab world, often due to war and political oppression. Among the displaced are some of the most talented writers and scholars working in the Arabic language today. Rasha Abbas, a Syrian journalist and short story writer who left Damascus for Beirut in 2012, eventually arrived in Germany in 2014. She said that she seemed to run into people she knew on the street in Berlin more often than she ever did in Damascus.

Abbas spoke recently at the British Library, where she has a short residency, researching a new project. Using the Library’s collections, she is beginning to write a story that uses tarot cards to link the story of the current refugee crisis with the period lasting three years from 1958 to 1961, in which Egypt and Syria were merged into the United Arab Republic; short extracts of her work were revealed on Saturday. Her talk was part of a two-day summit of Arab literature that featured the work of seventeen other writers from across the Arab world, organized by Shubbak Festival, a biennial festival of Arab culture in London.

Fourteen of the eighteen participants are currently based in Europe or America. The choice of speakers is, of course, somewhat limited by what appears to be official hostility to visa applications in Britain. Of the four writers based in the Arab world, only two got visas to come to the UK; the other two had their work discussed and one sent in a video of her reading. But the dominance of writers now living outside the Arab world also represents a broader trend in contemporary Arabic literature. More and more writers, forced out of their country by war or other hostile conditions for literary creation, are now based in Europe or America – temporarily at least. They write, by and large, in Arabic and for Arabic-speaking audiences. At the festival, readings were given in both English and Arabic. One line in a poem by Mona Kareem, born in Kuwait but forbidden from returning in 2011, spoke of a “life lived half on Skype”. The closest model for this generation of writers in exile might be the so-called “Mahjar poets” of the early twentieth century – a group of Syrian and Lebanese writers, based in America, who made a vital contribution to modern Arabic literature.

Unsurprisingly, one leitmotif of the weekend was what this distance from home meant for the writers. It was even unclear what we should call it. “The Spider makes a home outside itself. It does not call it exile”, went a verse by the Iraqi-America poet Dunya Mikhail. The Palestinian-American novelist Susan Abulhawa preferred the Arabic word ghurba, which means any estrangement and separation from your land. Others, such as Ali Badr, the prolific Iraqi novelist, and author of twenty-one books in Arabic, now based in Brussels, were happy with the word “exile”.

This experience of diaspora can be emotionally difficult but also literarily productive. In conversation with Susan Abulhawa, Gillian Slovo said that she had never felt she belonged either in South Africa or England but the one place she did feel at home was in literature. Exile can allow a writer to see their homeland from a different angle. Ali Badr said that the first time he really understood his country was when he was away from it. The inspiration that these writers’ experiences gave them was evident throughout the weekend. Talks on Arabic literature often do not get beyond the predictable gripes that no one ever reads Arabic literature and when they do they are only interested in clichés of headscarves and oppression. These panels, by contrast, were vital, varied and complex.