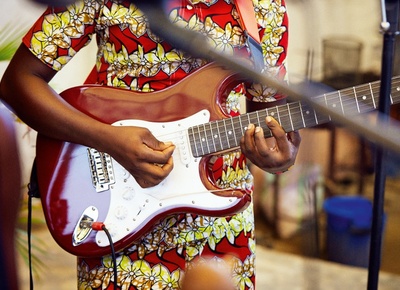 In 2014, Belgian Artist Carsten Höller premiered Fara Fara, a 13 minute film on a double screen exploring and reimagining Kinshasa’s vibrant music and dance scene. Later a 2015 Venice Biennale favourite, he remembers his travels to the Democratic Republic of Congo in Purple Magazine:

I’m on the plane to Kinshasa with four Europeans, none of whom has ever been to sub-Saharan Africa before. N’Djili Airport has been poshed up since I was there last, in 2011. To my disappointment, the little tourist information kiosk, where all they had was one postcard with some lounging bonobos, has disappeared. Same for the chair that was screwed to a wall because it lacked hind legs. We say hello to Papa Wemba in the lounge — our father of the rumba, Notre Père Rumba, as one of his albums is called. He came on the same Air France flight as us. There used to be huge crowds outside the airport when he came back from Europe, but not anymore.

We head straight to Zamba Playa, where Werrason is playing in front of a few hundred people. The five-lane highway to the city is brand new. It’s Chinese, but well done. They give us plastic chairs, placed in front of the stage, first row. Of course, no other whities. I wonder how my co-continentals feel about that. Finally, Primus. Werrason addresses the crowd, asking which of the two versions of the same song they like better. This is Congolese democracy. Madness. At the parliament, he says, “People, sit down,” to cool down the frenetically excited. He’s the only musician I’ve ever seen trying to calm down his public.

More Primus. Bellou drinks Turbo King, which is a strong dark beer. He’s our “cultural manager,” as he puts it. He is with Carlos, our driver and LeBrun and Maître Bola, who are here for our security. The music promoter Steve — with whom I organized Werrason (2004) and Koffi Olomidé (2005) concerts in Stockholm — also shows up. I am with Elin, George, Giovanna, and Pierre, and even at 11 PM, it’s very hot indeed.

Bercy Muana, the animateur with a third eye tattooed on his forehead, jumps and shouts like a psychotic wildebeest. Werrason is still trying to appease, but by now this seems more like an attitude, and he smiles. I am told that Bercy, whom they call “Goosebumps,” is coming from Ferre Gola. They call Werrason “King of the Forest.” And they call Bellou “Hakuna Matata” and “The Banker From Paris.” We finally make it to Chez Ntemba, my favorite nightclub in the world. The Primus is like machine oil. We all get dédicaces — shout-outs — from DJ Frank. No extra names for us, though. Over the years, Carlos has called me “Mopao,” but that’s an exaggeration because it means “big boss.” Koffi Olomidé is called that. My four fellow travelers have already lost all connection to spaceship Europe.

We are here to work on a book about a film that has not yet been made. Maybe it never will be, like an endless project, or like Synecdoche, New York, with Philip Seymour Hoffmann. The book can be the script for the film. Elin will write the text. George is the cutter. Giovanna is the editor and photographer. Pierre is the photographer; I told him I want old-style paparazzi pictures, with the camera in one hand and the flash in the other. That’s why we are here: they need to see and hear this.