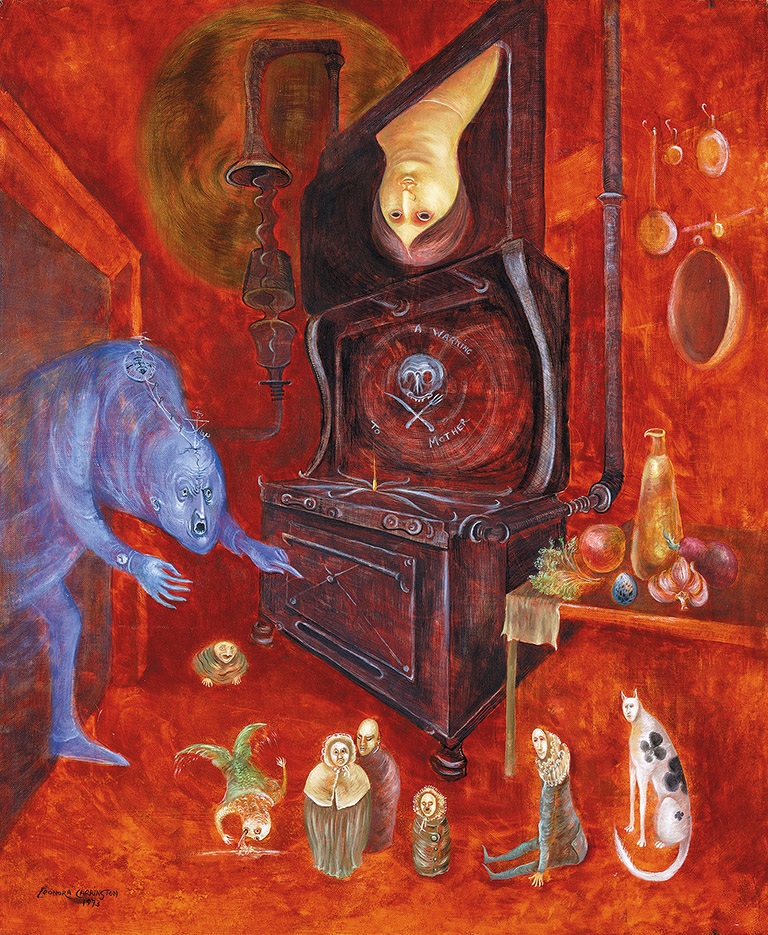 For the NYRB, Regina Marler reviews Whitney Chadwick’s Farewell to the Muse: Love, War and the Women of Surrealism, examining the life and work of the female Surrealists and the ‘fundamental incompatibility of the roles of beguiling muse and committed professional artist.’

One morning in Mexico City in 1991, the English Surrealist artist and writer Leonora Carrington and the art historian Whitney Chadwick set off for the Mercado de Sonora, a traditional market in a rough part of town that is also known as a mercado de brujería, or witches’ market. “It is here that the shamans and the curanderas [folk healers] find their supplies,” Carrington explained. After showing Chadwick various healing herbs and miracle cures, Carrington found what she’d been seeking: “one of the best-known curanderas.” They negotiated the price with an attendant, and Chadwick was led alone through a torn curtain to a woman on a low stool with long braids and penetrating dark eyes. “I stood paralyzed,” Chadwick recalled, “remembering stories my uncles had once told of foxes that hypnotized cats by swaying in front of them. I grew more nervous as the seconds passed.” Then she heard a commotion behind her, the curtain parted, and Carrington gripped her arm: “‘Don’t do it,’ she whispered, ‘Don’t do it. This woman works with black magic. She will kill frogs on your body and use the blood. Run!’” Chadwick stood transfixed until Carrington pulled her away, and they fled the market.

This incredible story is not from Chadwick’s latest book, Farewell to the Muse, but from a talk—a “memory piece,” as she described it—that she delivered in Mexico City in April 2017 at the centenary celebrations for Carrington, who died in 2011 at the age of ninety-four. She and Carrington had been friends since the early 1980s, when Chadwick was among the earliest scholars to seek out the more-or-less forgotten women of the Surrealist movement. In fact, one of the rich pleasures of reading this first generation of Carrington scholars—among them Marina Warner, Gloria Orenstein, and Susan Aberth, who wrote the first biography of Carrington—is that they knew her (and often related artists, such as Leonor Fini) for years. We need memoirs from these pioneers.

Chadwick does allow herself one significant anecdote in the introduction to Farewell to the Muse. In 1982, the painter Roland Penrose showed her his remarkable art collection at Farley Farm House, East Sussex. When he learned she was planning to write about the female Surrealists, he shook his head: “‘You shouldn’t write a book about the women,’ he said…. ‘They weren’t artists.’” Chadwick probably glanced around the room at this point, having just seen the work he owned by his two wives, the French poet and collagist Valentine Penrose and the American photographer Lee Miller. “‘Of course the women were important,’ he continued, ‘but it was because they were our muses.’”

The vexed issue of muses undermines the revolutionary program of international Surrealism: the rejection of the rational and of all the oppressive institutions and bourgeois norms that, André Breton and others argued, had led to the ravages of World War I. In place of the military, the family, and the church, Surrealists would celebrate the imagination, sexual liberty, and the promptings of the unconscious. In his first Surrealist Manifesto, Breton called for an art of “psychic automatism” that would record “thought, in the absence of any control exercised by reason, apart from any moral or aesthetic concerns.” Women were exalted as conduits to these chthonic realms. In the process, Breton and his followers created a mythology out of the way pretty women made them feel.

“Man defines woman not as herself but as relative to him,” observed Simone de Beauvoir in The Second Sex (1949). Among the writers she skewered, she could have included the Surrealist poet Paul Éluard, whose 1924 poem “L’Amoureuse” throws his image over his wife Gala’s like a coat: “She has the shape of my hands, she has the color of my eyes, she is engulfed in my shadow.” But Beauvoir went straight for Breton. The ideal woman of Breton’s poetry, she wrote, “casts the same spell as the equivocal objects loved by the surrealists: she is like the spoon-shoe, the table-magnifying glass, the sugar cube of marble that the poet discovers at the flea market or invents in a dream.” Equating Beauty with Woman relegates women to a land of toys. The Second Sex sold 22,000 copies in its first week alone, and Beauvoir’s analysis of Breton fuelled decades of feminist revisions of Surrealism. When Beauvoir criticizes you, you stay criticized.