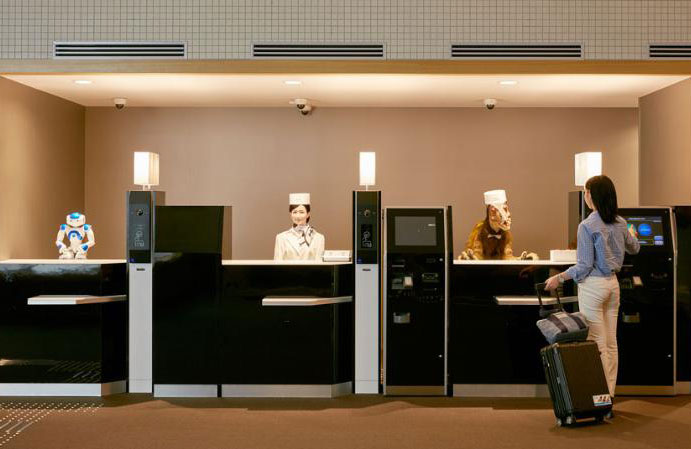 Japan has a national gift for holding in balance the stateliness of tradition and the marvel of novelty. So it ought to come as no surprise that on the western margin of the archipelago, on a serene bay in a remote area of the Nagasaki Prefecture, there is an enormous theme park dedicated to the splendors of imperial Holland. It follows with perfect logic that the historical theme park’s newest lodging place is the world’s first hotel staffed by robots.

The hotel, even before it opened last summer, had received extensive coverage in the international and domestic press for its promise of novel ease and convenience. But when I arrived at the Huis Ten Bosch theme park very late one humid summer night, just days after the fanfare of the robot hotel’s ribbon-cutting, nobody was quite sure where it might be found. Even the employees of the resort’s Hotel Okura, a towering replica of Amsterdam’s Centraal Station replete with stone reliefs and mansard roofs, discovered themselves unable to come to my aid. In rudimentary Japanese I asked where one might find the Henn-na Hotel. The name is an untranslatable double entendre: The literal meaning is “Strange Hotel,” but it’s very close to the word for “evolve”; it’s designed to acknowledge the slight uncanniness that might attend the coming hospitality singularity. The dual meaning, however, seemed lost on the Okura’s concierge, whose rigorous training hadn’t prepared her to counsel swarthy, disreputable-seeming, late-arriving foreigners in search of evolved accommodation. I did a little Kraftwerk automation dance to clear things up, but it only seemed to alarm her further.

My journey had taken 24 hours, and I looked forward to interacting with no more humans en route to a dreamless sleep.

She bowed and looked at her feet, then busied herself at her drawer, eventually withdrawing a map of the park and its environs; at almost 400 acres, Huis Ten Bosch is nearly the size of Monaco. Her pen hovered over the park’s periphery, at the verge of the bosky hills that surround mock Holland.

“Maybe,” she said, “it is here.” Her pen landed on one of the map’s empty green spaces.

“Arigatou gozaimasu,” I said, bowing with great weariness. My journey, taxi-flight-walk-flight-taxi-train-train, had taken 24 hours, and I looked forward to interacting with no more humans en route to a dreamless sleep.

But she wasn’t finished. “Maybe,” she continued, “it is here.” Her pen landed on another unoccupied parcel of the park map.

I thanked her again, bowed again.

Before I could back away, she held up one finger, then marked a third place for good measure. “Maybe,” she concluded, “it is here.”

“Can I walk there?” I asked, as if she’d specified with confidence a particular there.

The concierge had reddened considerably. She did not know where one might find the hotel; at the same time, it was a source of great shame to her to think she might disappoint a patron. The Japanese language and culture do not distinguish between a guest and a customer—even, as in this case, a customer of somebody else’s hotel—so her inability to assist felt to her like a jagged tear in the social fabric. For my entire tenure at that counter, she was going to mark, with fear and hope, an arbitrary sequence of potential strange hotel locations. I backed away, bowing, to spare her this potentially endless exercise. The Japanese desire to save face makes omnipresent the threat of looping infinite regress, and it wasn’t fair to either of us to let it continue.

This initial exchange was depleting but in an instructive and relevant way. One of the many wonderful contradictions of Japan is that it hosts both the world’s most mature service industry and the world’s most advanced androidal technology. It was, in fact, with that contradiction in mind that I’d set out to visit our service future, to see how nostalgic I’d be, in the face of their summary deletion, for human beings.