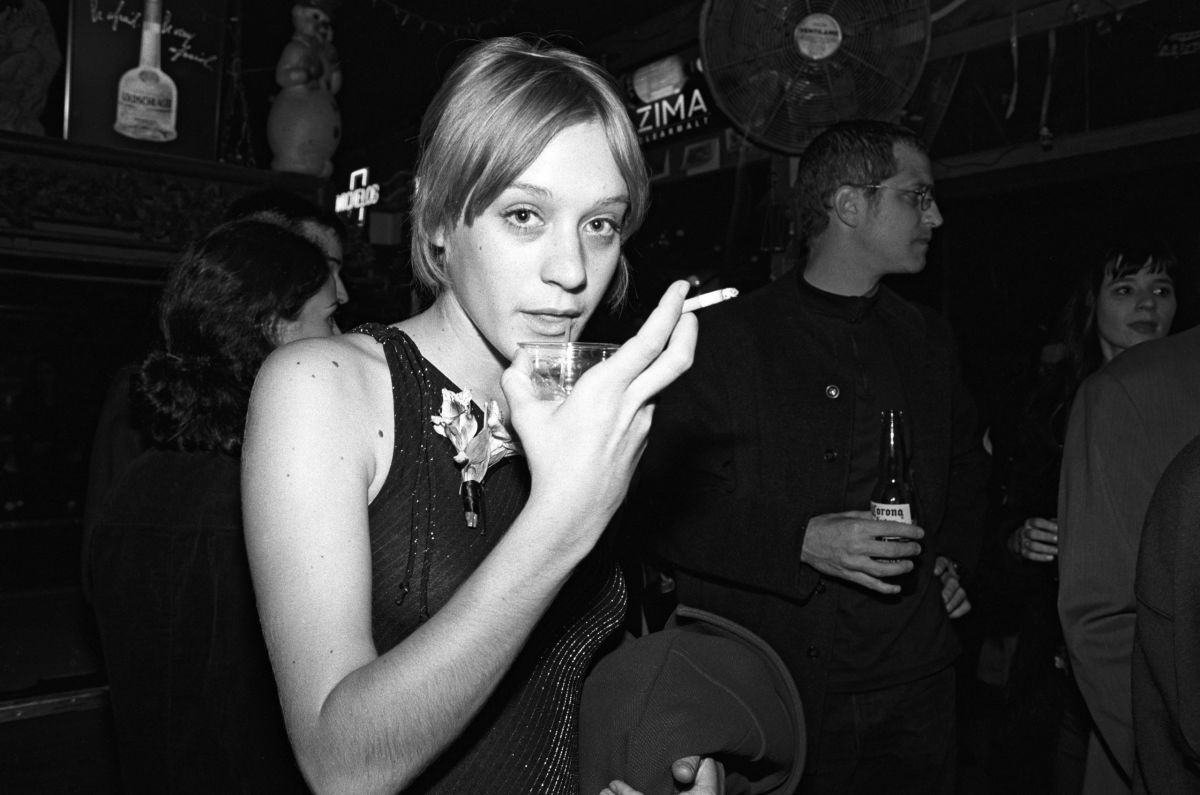 It’s weird, this happens all the time. Chloe Sevigny is sitting at one of the outdoor tables at Stingy Lulu’s, on St. Mark’s Place just off Avenue A, absorbing a mixed green salad and devouring the just-out September Vogue. A black girl and an Asian girl huddle anxiously on the corner a few yards away, checking her out. The two are about Chloe’s age, which is nineteen, and they seem to be debating whether or not to approach. Do they recognize her from the Sonic Youth video—the one filmed in Marc Jacobs’ showroom, which was kind of a spoof of the whole grunge thing—or did they catch her modelling the X-Girl line last spring? Maybe they saw her photos in Details, the ones taken by Larry Clark, who has just cast Chloe in his new movie, “Kids.” The girls pass by once and walk halfway up the block before they turn back, clinging to each other, and stop just behind Chloe’s right shoulder.

Chloe looks up, wrapping her arms tight around herself in an instinctive gesture of protection, as if to reduce the exposed surface area of her body even as she manages a smile that is shy and skeptical and indulgent all at the same time. It’s not like this hasn’t happened before, but it’s still a little, you know, weird.

“Can you, um, tell us where you got your, uh, shoes?” the black girl asks.

Chloe giggles with relief. She looks down at her jellies—transparent plastic sandals. Now that practically everybody’s wearing big, chunky, cleated boots and platform sneakers—even people who shlump every day to offices uptown—Chloe has moved on. She’s already gone. And the two girls standing on the sidewalk in their big black Doc Martens want to follow her. Chloe tries to remember where she got the sandals.

“I think it’s right around the comer, on Avenue A. I can’t think of the name. Something Something.”

The girls thank her and practically run up the street. Chloe fires up a Camel Light and resumes her study of Vogue. Watching Chloe read a fashion magazine makes you think of Alexander Woollcott devouring a ten-pound lobster à l’américaine or Casanova undressing a servant girl. “This Marc Jacobs dress is beautiful. . . . Helmut Lang is my absolute favorite. . . . God, Armani is so old-ladyish. . . . Lagerfeld ruined the house of Chanel; Coco would never have done miniskirts. I watched this documentary about her. She was so great. . . . I’m like a fashion-magazine junkie. I love them, but they’re usually pretty lame. By the time they print it, it’s already happened. The British magazines are much further ahead in terms of what’s happening in the street.

Chloe can speak with some confidence about what’s happening in the street. Some say Chloe is what’s happening in the street. In addition to her jellies Chloe is wearing a very short white dress made of a shiny, flame-friendly space-age synthetic. It looks sort of familiar (Gaultier? X-Girl?), although you won’t see anyone else on the street wearing one, at least not yet, with eight weeks to go till Halloween. Maybe you saw it a few years back on the little girl from the next building who came around with her father and held her pillowcase open for the mini Snickers bars. It says “Cinderella” in floral-pink letters across the chest, above an image of a magic slipper and a cheerful pink-and-blue rendering of the fairy-tale princess inside her pumpkin carriage. All that’s missing is the plastic mask. The funny thing is, it looks really good on Chloe. Several people have already asked about it today, and she’s told them she scavenged this number in a Brooklyn thrift shop. Two dollars. She accessorizes it with a fake Chanel bracelet from Canal Street, which she wears around her biceps. At this moment, she is five feet eight, weighs a hundred and ten pounds, and looks, in her current short coif, quite a bit like a skinny Jean Seberg. Her nose is perhaps a bit blunt, and she points out the crookedness in her posture, which is the result of childhood scoliosis, but this doesn’t prevent downtown style-chieftains and scenesters from comparing her to Twiggy and Audrey Hepburn and Edie Sedgwick.