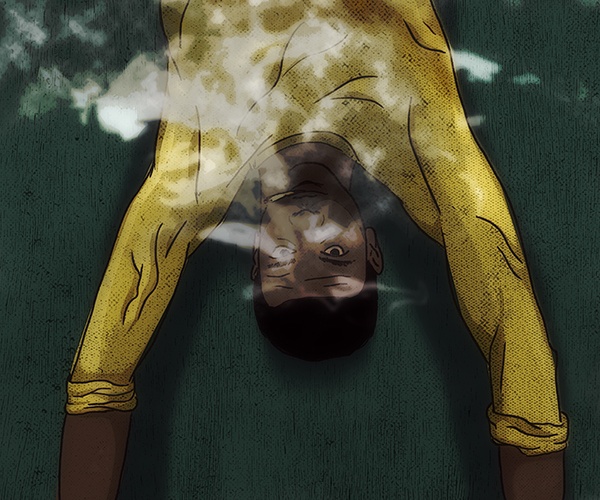 Jennifer Percy recounts her encounter with ‘a man so bizarre ISIS wouldn’t keep him.’ The full article can be read on the Guernica website:

In the northern Iraqi city of Erbil, in the lobby of the Tangram hotel, my interpreter Salar and I watched the newest ISIS execution videos. Salar had access to videos that weren’t public. “The Chinese thought of this one,” said Salar, a fifty-year-old Sunni from Kurdistan. Four men in a cage were lowered into a swimming pool and held underwater until they drowned. They were raised wet and limp. A prisoner’s mouth oozed foam. “It’s not very nice actually,” he said.

A restaurant on the third floor of the hotel overlooked a detention center for terrorists. In the front lobby there were free apples, but not many customers. Our waiter, Basim, a young Iraqi Christian, served us coffee.

“Where are you from?” I asked.

Salar and I laughed. But Basim was blinking. “Did Daesh take my stuff?” he asked. We didn’t know. Bartella was still under the control of ISIS, I said. We were close enough to see the village through the lens of a telescope.

In the next video, ISIS fired a rocket-propelled grenade at a car soaked with fuel and packed with prisoners. The men burned alive. Another video, called “The Reality of the American Raid,” was a response to an American raid on a prison in Hawija. It began with an ISIS fighter sawing the head off a Kurdish prisoner while three other prisoners watched. The camera zoomed in on the men’s faces while they watched the beheading. The executioner set the severed head on the body. Though the head was no longer attached to the body, the mouth opened and gulped for air.

Basim sat down next to us on the couch. “Tomorrow I’m leaving,” he said.

“You are fleeing ISIS?” I asked.

He had been in love with a woman in Bartella. They dated for many years and planned to marry, but her family didn’t like Basim because he wasn’t from a wealthy family. They tried again and again, but the family wouldn’t approve the marriage.