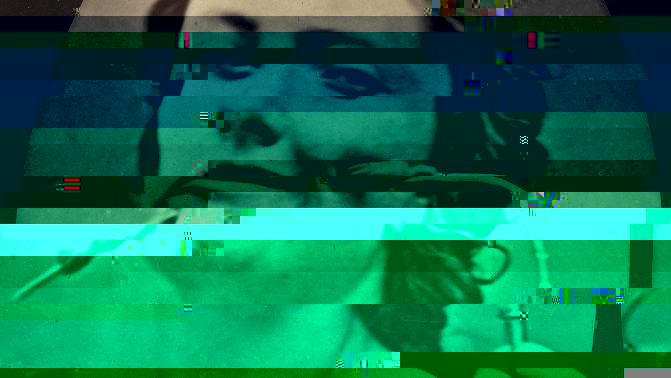 My Skype call with the cyborgs drops for the second time. They’re traveling, they explain, and the Internet is bad. The app gurgles, failing to connect us. I end up addressing my questions to their account’s profile picture, an image of the Earth. In a corner of the screen, a small rectangle reflecting my upper body floats like a minor planet.

The account belongs to Neil Harbisson, who is one half of the cyborg duo. His username is “Neil Harbisson’s Head,” which is fitting, as he’s connected to Skype through the thin black antenna that he had surgically attached to his skull about thirteen years ago. Our technical difficulties persist and we never do get to see each other, a circumstance I’m left trying to reconcile with the knowledge that for many, what he and his artistic partner Moon Ribas are doing represents the cutting edge of human ingenuity. Millions have watched the TED talks in which Harbisson and Ribas explain how their cyborg bodies came to be and the art their extended senses allow them to create. Harbisson, thirty-four, was born with achromatopsia, a type of colorblindness that limits his vision to black and white. Curious about what seeing color would be like, he developed an antenna that gives him a kind of synesthesia, allowing him to hear color waves translated as sonic signals; the first colors he heard belonged to a Windows logo on a nearby device. “It was really magical,” he recalls. Ribas, thirty-one, hoping to deepen her connection to nature, had a chip implanted in her elbow that sends tremors down her arm whenever earthquakes occur.

They haven’t seen Westworld, the western android TV thriller based on the Michael Crichton film of the same name that debuted in the fall of 2016. They’ve heard of Donna Haraway’s “A Cyborg Manifesto,” considered a founding text in cyborg theory, but say they haven’t read it. They’ve never cared for science fiction. While growing up together in Catalonia, they were interested in animals and the natural world. Technology, by contrast, was cold and distant. They spent most of their time in the woods. “My aim was not to become a cyborg,” Harbisson says. “It was to sense color.” Being able to hear colors, including ultraviolet and infrared, which are invisible to the human eye, strengthened his conviction that “human” failed to describe his new self. Eventually, he felt no difference between where the technology ended and his human body began. “The only word that really described this is ‘cyborg,’” he says.

Their surgeries took place in secret—their doctors feared losing their licenses over the probable media backlash—and were not without risk. “We were never really scared,” Ribas says of the process. “It was exciting, it was always an experiment. When you are so curious about something, everything else doesn’t really matter.” At first, their brains rebelled. Tremors from larger earthquakes woke Ribas up at night before she grew accustomed to the sensations. “Now I feel like I have two heartbeats: my own, and the earth, beating at its own rhythm,” she says. During his initial months with the antenna, Harbisson suffered from headaches and was often exhausted. “It was an overload,” he remembers. “I was hearing color everywhere. It wasn’t a good start. But after five months, my brain got used to it.” Though his mother disapproved, she eventually came around.

The press has salivated over their apparent novelty, Harbisson’s in particular. The BBC described him as “the first legally recognized cyborg,” as in 2004 he was permitted to pose for his United Kingdom passport photo with his antenna intact. Sometimes this title is shorthanded: a Google search for “the first cyborg” yields Harbisson’s name in the first few results.

Assertions of cyborg primacy are precarious. Over the years, news outlets have named various cyborgs “first.” In the running, too, is Steve Mann, a Canadian inventor who is considered the “father of wearable computing.” Decades before Harbisson, Mann negotiated for and won the right to fly with his implant, a self-designed computer vision device which he calls the EyeTap. According to Motherboard, however, the first cyborg was Kevin Warwick, a British engineer and professor who in 1998 had an RFID transmitter implanted in his arm that allowed him to control lamps and other nearby devices via the Internet. If you ask Discovery, the first cyborg was a man named Johnny Ray, a Vietnam veteran who, after a stroke stripped him of the ability to speak, lived for a time with an electrode implant in his brain that let him relay messages with his thoughts. Or perhaps the first cyborg was a rat.