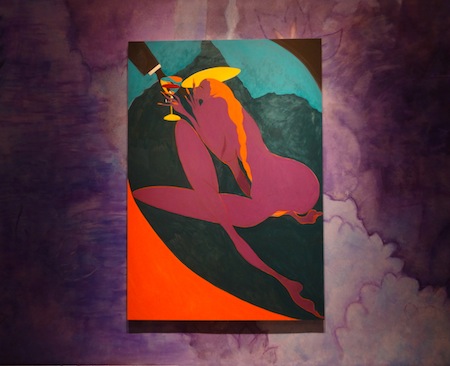 frieze co-editor Dan Fox, who is currently writing a book for Fitzcarraldo Editions, rounds up this year’s highlights in film, art, music, etc.:

As far as disgraceful social injustice and disgusting political corruption go, 2014 was a vintage year. So for me, two of the most significant works made by artists in 2014 were not artworks. The first of these, Laura Poitras’s film CITIZENFOUR, is an astonishing historical document, recording the days and weeks during which Edward Snowden’s revelations about electronic government surveillance became one of the defining political stories of our age. Whether or not CITIZENFOUR is a ‘good’ documentary in the aesthetic sense is neither here nor there. Since the film’s release in October, I’ve had numerous arguments with people who think that Poitras could have ‘done more’ with her footage. I think they are missing the point. (What do you want? A nine-channel HD video installation featuring the complexities of electronic surveillance explained through a Judson Church-influenced dance sequence, sound-tracked by Miley Cyrus, and accompanied by a collateral programme of talks and film screenings?) What CITIZENFOUR makes clear is how few documentary films actually record a story of global proportions unfolding in front of the director’s camera. Here is a subject that needs no embellishment, no artistic lace doilies. CITIZENFOUR will be seen in the future as an exceptional piece of primary historical evidence. I left the cinema stunned by the courage of those involved in breaking the story, and in the production of this film.

Perhaps CITIZENFOUR felt all the more urgent because 2014 was a miserably grim year in world news, and Poitras’s film was just one particularly explicit expression of our frustration at the current shape of power. Which brings me to the second notable non-artwork by artists this year: The W.A.G.E. Certification campaign by New York-based artist group Working Artists for the Greater Economy. In the organization’s own words, ‘Certification is a voluntary program initiated and operated by W.A.G.E. that publicly recognizes non-profit arts organizations demonstrating a history of, and commitment to, voluntarily paying artist fees that meet a minimum payment standard.’ In October, New York’s Artists Space was the first non-profit gallery to sign up to the scheme, an important gesture in a town held in the vice-grip of unchecked real estate greed and increasing economic disparity. (‘People like you lose all claim to respect the first time they pay anybody rent,’ remarks Crocker Fenway, a ruthless businessman in Paul Thomas Anderson’sInherent Vice. Both the film and the Thomas Pynchon novel it is based on are set in 1970, but that’s a line aimed right between the eyes of 2014.)

‘But c’mon Fox,’ I hear you cry, ‘we’re here to read about art not the price of eggs!’ OK, fair enough. 2014, for me, often seemed to have its gaze fixed on the past rather than the present, and notable retrospectives and surveys were thick on the ground. ‘The Heart is Not a Metaphor’, Robert Gober’s ‘this is your life’ moment at the Museum of Modern Art, New York, may not have been quite the immersive experience as his 2007 career overview at Basel’s Schaulager was, but I rarely tire of seeing his sculptures and installations. Gober’s work serves as a gentle and often moving reminder that Surrealism is the one art movement that never really disappeared or lost its power to disturb and entrance. I was taken aback by how much I enjoyed ‘Night and Day’, Chris Ofili’s victory lap at the New Museum, New York. In Britain during the 1990s heyday of Young British Art, Ofili’s work was so often reproduced in the media that it lost some of its pizzazz through overfamiliarity, so perhaps absence has made the heart grow fonder. (Protests erupted in New York when his 1996 painting The Holy Virgin Mary was exhibited at the Brooklyn Museum in 1999. In 2014, we’ve got far bigger problems to worry about than offending the sensibilities of a few iconodule Catholics.) Amy Sillman’s survey show ‘One Lump or Two’ at the Hessel Museum of Art/CCS Bard (which toured from the ICA Boston) was not just funny and imaginative, but a testament to the possibilities of painting, and ‘The Production Line of Happiness’ – a wonderfully titled retrospective of Christopher Williams’ photography at the Art Institute of Chicago and MoMA, New York – was as crisply milled as the glass on a Leica lens.

Many of the past year’s retrospectives were dedicated to the sadly departed. We had Sigmar Polke’s inventive mischief at MoMA, New York and Tate Modern, London; Sturtevant’s pioneering work in the field of appropriation – also at MoMA – and a moving exhibition of painting by Leonilsson at the Pinacoteca do Estado São Paulo. And I mustn’t forget the small but knockout selection of small paintings by US artist Albert York at Matthew Marks Gallery, New York; bucolic landscapes, still lifes and allegorical works suggesting what Giorgio Morandi and Odilon Redon might have painted had they lived on Long Island.