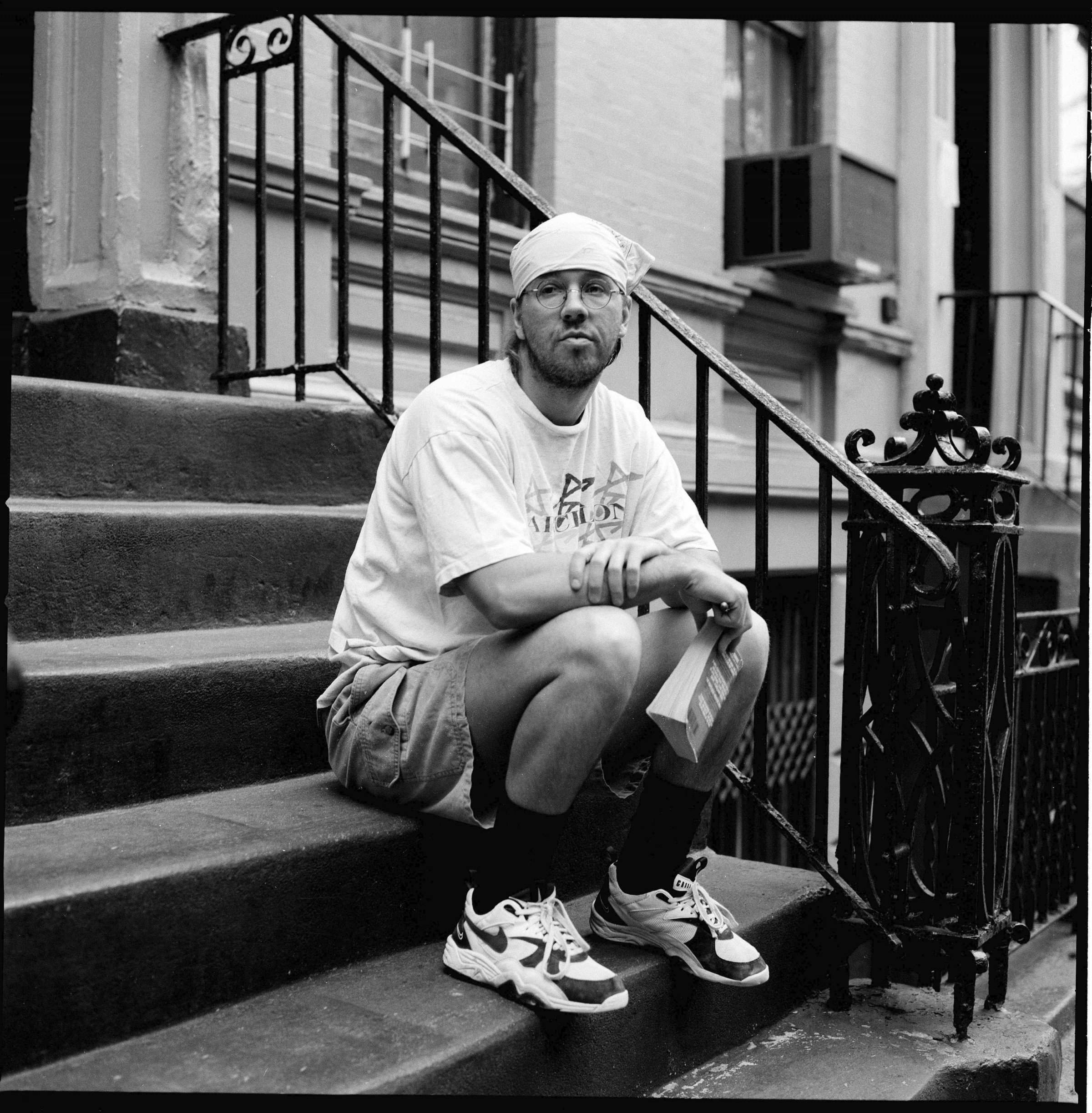 David Foster Wallace wrote about tennis in fiction, essays, journalism, and reviews; writing for the New Yorker, John Jeremiah Sullivan observes that ‘it may be his most consistent theme at the surface level’:

“Tennis” is a wonderful word in the sense that it never really existed. That is, although the game is French to the core—not one but two of France’s early kings died at the tennis courts, and the Republic was born on one, with the Tennis Court Oath—the French never called it that, tennis. They called it jeu de paume, the “game of the palm,” or “handball,” if we want to be less awkwardly literal about it. (Originally they had played it with the bare hand, then came gloves, then paddles, then rackets.) When the French would go to serve, they often said, Tenez!, the French word for “take it,” meaning “coming at you, heads up.” We preserve this custom of warning the opponent in our less lyrical way by stating the score just before we toss up the ball. It was the Italians who, having overheard the French make these sounds, began calling the game “ten-ez” by association. A lovely detail in that it suggests a scene, a Florentine ear at the fence or the entryway, listening. They often built those early courts in the forest, in clearings. The call in the air. Easy to think of Benjy in “The Sound and the Fury,” hearing the golfers shout “Caddy!” and assuming they mean his sister, only here the word moves between languages, out of France via the transnational culture of the aristocratic court and into Italy. There it enters European literature around the thirteen-fifties, the time of Petrarch’s “Phisicke Against Fortune.” In considering the anxiety that consumes so much of human experience, he writes, “And what is the cause hereof, but only our own lightness & daintiness: for we seem to be good for nothing else, but to be tossed hither & thither like a Tennise bal, being creatures of very short life, of infinite carefulness, & yet ignorant unto what shore to sail with our ship.”

A metaphor for human existence, then, and for fate: “We are merely the stars’ tennis-balls,” in John Webster’s “Duchess of Malfi,” “struck and banded / Which way please them.” That is one tradition. In another, tennis becomes a symbol of frivolity, of a different kind of “lightness.” Grown men playing with balls. The history of the game’s being used that way is twined up with an anecdote from the reign of Henry V, the powerful young king who had once been Shakespeare’s reckless Prince Hal. According to one early chronicler, “The Dauphin, thinking King Henry to be given to such plays and light follies . . . sent to him a tun of tennis-balls.” King Henry’s imagined reply at the battle of Agincourt was rendered into verse, probably by the poet-monk John Lydgate, around 1536:

Some hard tennis balls I have hither brought
Of marble and iron made full round.
I swear, by Jesu that me dear bought,
They shall beat the walls to the ground.

That story flowers into a couplet of Shakespeare’s “Henry V,” circa 1599. The package from the Dauphin arrives. Henry’s uncle, the Duke of Exeter, takes it. “What treasure, uncle?” the king asks. “Tennis-balls, my liege,” Exeter answers. “And we understand him well,” Henry says (a line meant to echo an earlier one, said under very different circumstances, Hal’s equally famous “I know you all and will awhile uphold”):

How he comes o’er us with our wilder days
Not measuring what use we made of them.

A more eccentric instance of tennis-as-metaphor pops up in Shakespeare’s “Pericles,” where the tennis court is compared with the ocean. It occurs in the part of the play that scholars now believe was written by a tavern-keeper named George Wilkins. Pericles has just been tossed half dead onto the Greek shore and is discovered by three fishermen. He says,

A man whom both the waters and the wind,
In that vast tennis-court, hath made the ball
For them to play upon, entreats you pity him.

These lines may cause some modern readers to recall David Foster Wallace’s “Derivative Sport in Tornado Alley,” an essay about learning to play the game in the central Midwest, where extreme winds are an almost constant factor, but where Wallace succeeded, he tells us, in part because of a “weird robotic detachment” from the “unfairnesses of wind and weather.”

David Foster Wallace wrote about tennis because life gave it to him—he had played the game well at the junior level—and because he was a writer who in his own way made use of wilder days, turning relentlessly in his work to the stuff of his own experience. But the fact of the game in his biography came before any thought of its use as material. At least I assume that’s the case. It can be amazing how early in life some writers figure out what they are and start to see their lives as stories that can be controlled. It is perhaps not far-fetched to imagine Wallace’s noticing early on that tennis is a good sport for literary types and purposes. It draws the obsessive and brooding. It is perhaps the most isolating of games. Even boxers have a corner, but in professional tennis it is a rules violation for your coach to communicate with you beyond polite encouragement, and spectators are asked to keep silent while you play. Your opponent is far away, or, if near, is indifferently hostile. It may be as close as we come to physical chess, or a kind of chess in which the mind and body are at one in attacking essentially mathematical problems. So, a good game not just for writers but for philosophers, too. The perfect game for Wallace.