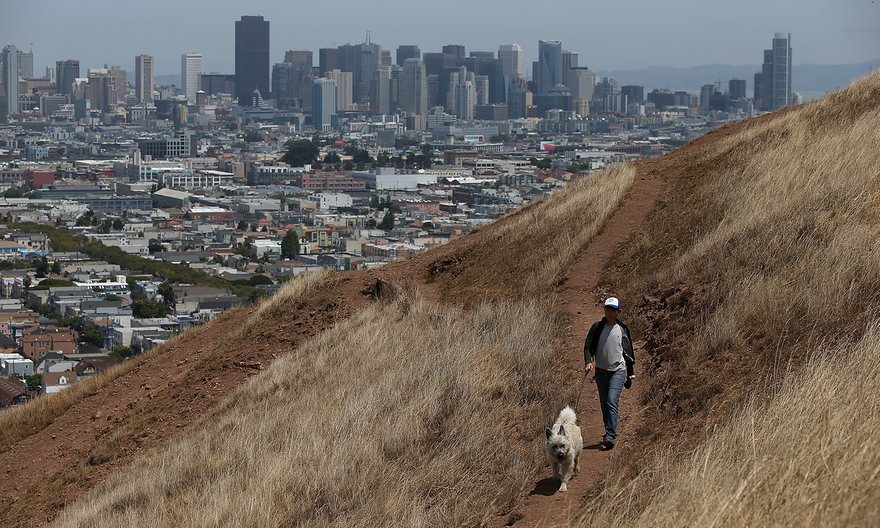 Writing for the Guardian, Rebecca Solnit tells the story of the killing of Alejandro Nieto in March 2014, a death ‘that shamed San Francisco’. (Also available as a podcast.)

On the evening of 21 March 2014, Evan Snow, a thirtysomething “user experience design professional”, according to his LinkedIn profile, who had moved to the neighbourhood about six months earlier (and who has since departed for a more suburban environment), took his young Siberian husky for a walk on Bernal Hill.

As Snow was leaving the park, Nieto was coming up one of the little dirt trails that leads to the park’s ring road, eating chips. In a deposition prior to the trial, Snow said that with his knowledge of the attire of gang members, he “put Nieto in that category of people that I would not mess around with”.

His dog put Nieto in the category of people carrying food, and went after him. Snow never seemed to recognise that his out-of-control dog was the aggressor: “So Luna was, I think, looking to move around the benches or behind me to run up happily to get a chip from Mr Nieto. Mr Nieto became further – what’s the right word? – distressed, moving very quickly and rapidly left to right, trying to keep his chips away from Luna. He ran down to these benches and jumped up on the benches, my dog following. She was at that point vocalising, barking, or kind of howling.”

The dog had Nieto cornered on the bench while its inattentive owner was 40 feet away – in his deposition for the case, under oath, his exact words were that he was distracted by a female “jogger’s butt”. “I can imagine that somebody would – could assume the dog was being aggressive at that point,” Snow said. The dog did not come when he called, but kept barking. Nieto, Snow says, then pulled back his jacket and took his Taser out, briefly pointing at the distant dog-owner before he pointed it at the dog baying at his feet. The two men yelled at each other, and Snow apparently used a racial slur, but would not later give the precise word. As he left the park, he texted a friend about the incident. His text, according to his testimony, said, “in another state like Florida, I would have been justified in shooting Mr Nieto that night” – a reference to that state’s infamous “stand your ground” law, which removes the obligation to retreat before using force in self-defence. In other words, he apparently wished he could have done what George Zimmerman did to Trayvon Martin: execute him without consequences.

Soon after, a couple passed by Nieto. Tim Isgitt, a recent arrival in the area, is the communications director of a nonprofit organisation founded by tech billionaires. He now lives in suburban Marin County, as does his partner Justin Fritz, a self-described “email marketing manager” who had lived in San Francisco about a year. In a picture one of them posted on social media, they are chestnut-haired, clean-cut white men posing with their dogs, a springer spaniel and an old bulldog. They were walking those dogs when they passed Nieto at a distance.

Fritz did not notice anything unusual but Isgitt saw Nieto moving “nervously” and putting his hand on the Taser in its holster. Snow was gone, so Isgitt had no idea that Nieto had just had an ugly altercation and had reason to be disturbed. Isgitt began telling people he encountered to avoid the area. (One witness who did see Nieto shortly after Isgitt and Fritz, longtime Bernal Heights resident Robin Bullard who was walking his own dog in the park, testified that there was nothing alarming about him. “He was just sitting there,” Bullard said.)

At the trial, Fritz testified that he had not seen anything alarming about Nieto. He said that he called 911 because Isgitt urged him to. At about 7.11pm he began talking to the 911 dispatcher, telling her that there was a man with a black handgun. What race, asked the dispatcher, “black, Hispanic?” “Hispanic,” replied Fritz. Later, the dispatcher asked him if the man in question was doing “anything violent”, and Fritz answered, “just pacing, it looks like he might be eating chips or sunflowers, but he’s resting a hand kind of on the gun”. Alex Nieto had about five more minutes to live.