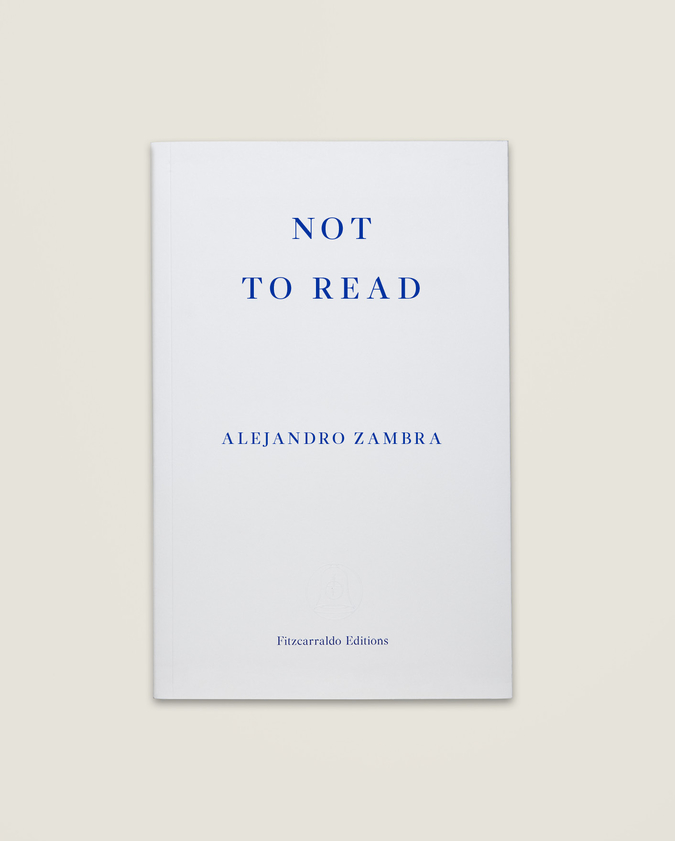 An excerpt from Not to Read by Alejandro Zambra, published today.

I still remember the day when the teacher turned to the chalkboard and wrote the words test, next, Friday, Madame, Bovary, Gustave, Flaubert, French. With each word the silence grew, and by the end the only sound was the sad squeaking of the chalk. By that point we had already read long novels, almost as long as Madame Bovary, but this time the deadline was impossible: barely a week to get through a four-hundred-page book. We were starting to get used to those surprises, though: we had just entered the National Institute, we were twelve or thirteen years old, and we knew that from then on, all the books would be long.

That’s how they taught us to read: by beating it into us. I feel sure that those teachers didn’t want to inspire enthusiasm for books, but rather to deter us from them, to put us off books forever. They didn’t waste their spit extolling the joys of reading, perhaps because they had lost that joy or had never really felt it. Supposedly they were good teachers, but back then being good meant little more than knowing the textbook.

As Nicanor Parra might say, ‘our teachers drove us nuts / with their pointless questions’. But we soon learned their tricks, or developed ones of our own. On all the tests, for example, there was a section of character identification, and it included nothing but secondary characters: the more secondary the character, the more likely we would be asked about them. We resigned ourselves to memorizing the names, though with the pleasure of guaranteed points.

There was a certain beauty in the act, because back then that’s exactly what we were: secondary characters, hundreds of children who crisscrossed the city lugging denim backpacks. The neighbours would feel their weight and always make the same joke: ‘What are you carrying in there, rocks?’ Downtown Santiago received us with tear gas bombs, but we weren’t carrying rocks, we were carrying bricks by Baldor or Villee or Flaubert.

Madame Bovary was one of the few novels we had at my house, so I started reading that very same night, following the emergency method my father had taught me: read the first two pages and right away skip to the final two, and only then, once you know how the novel begins and ends, do you continue reading in order. ‘Even if you don’t finish, at least you know who the killer is,’ said my father, who apparently only ever read books about murders.

I never again trusted movie versions, and ever since then I have thought that the cinema lies and literature doesn’t (I have no way of demonstrating this, of course). I read Flaubert’s novel much later, and I tend to reread it every year, more or less when the first flu hits. There’s no mystery in changing tastes; these things happen in the life of any reader. But it’s a miracle that we survived those teachers, who did everything they could to show us that reading is the most boring thing in the world.