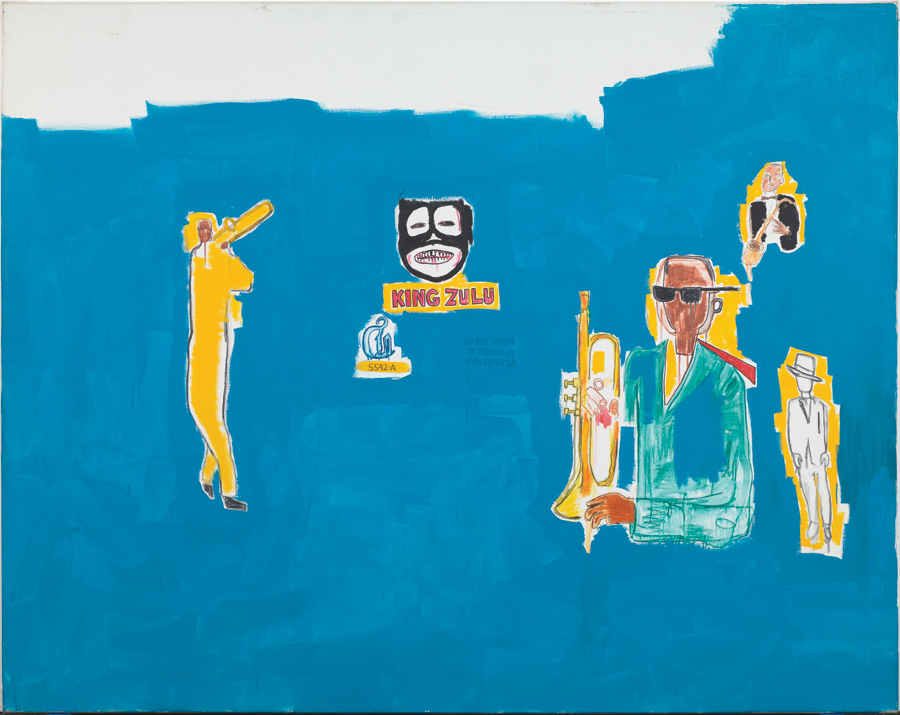 Back in 1982, the critic Rene Ricard discerned that Basquiat’s ‘earlier paintings were a logical extension of what you could do with a city wall’. His canvases are experimental zones where he explores the picture as an exploding galaxy of information (Pegasus, 1987) and the portrait as some digressive freak-out: Five Fish Species, 1983, dedicated to William Burroughs, is littered with factoids, quotations and dates drawn from the master’s dark biography. They operate like fields of strangely musical noise: words repeating, odd mixtures of art brut or antique material in duet, favourite themes (fame, death, cities, economics) resurrected or ripped apart. Skunks, leeches, Titian, boxing matches, dogs, Straight, No Chaser (1965) by Thelonious Monk, notebook scrawls about ‘the germs on a spoon behind the oven’: Basquiat turns his brain inside-out in encyclopaedic fashion. This data is also a wormhole of personal code and allusion: severed ears, the word ‘tar’, a feast of snakes hinting at poisons in his system and creeps trying to win his fortune. Sometimes he finds sucker-punch eloquence in drawing little more than a bone or tooth.

The same contrary energies are at play through his raid on art history. Basquiat figured out early that painting could be a patricidal game. (Hoban’s book seethes with his alternate bad feelings towards and eagerness to please his father.) For Untitled (World Trade Towers) (1981), he stages what he calls elsewhere ‘a flashback to his childhood files’ – revisiting the moment when he was hit by a car, aged seven – in the spirit of Cy Twombly with amphetamine psychosis. But for a few gobbets of blood-red gore, the scene is all scary monochrome: electrified Roman numerals mix with wonky alphabets and blurred shadows. Leonardo da Vinci’s Greatest Hits (1982) maims juicy parts of the genius’s back catalogue, turning the head of Vitruvian Man (1490) into a blast of static. Homage deforms into parody: wicked jokes at the expense of dead elders.

The raw facts of being the rare black kid within the white art world are also at play in his rambunctious attitude to the canon. (One creepy tidbit sees him alter a headshot of Warhol, creating Drella in blackface.) He provided acid commentary on the art world’s crook economics and ominous exclusions from the beginning. Site-specific riddles, Basquiat’s Samo graffiti comes from the same wish to unsettle or seduce the bougie crowd. A room of Henry Flynt photographs track him like a character from downtown folklore, half secret agent, half ghost, the cryptic one-liners appearing between cracked windowpanes and filthy paving slabs, words faint as ectoplasm: ‘Samo as a result of overexposure’. (Is the critic Greg Tate correct that everybody should hear ‘sambo’ stashed inside ‘Samo’, short for ‘same old shit’?) Like Warhol, Basquiat was always conscious of art’s proximity to prank. He scribbles factoids about his big daddy predecessors on brown paper for Untitled (Rauschenberg, Lichtenstein, Duchamp, Pollock) (1986–87), knowing his hand transforms mere art historical rehash into treasure. It indicates his typical wily self-consciousness about his status as a commodity – Basquiat garlanded his work with copyright symbols – but also his fixation on art history and whatever afterlife it assures.