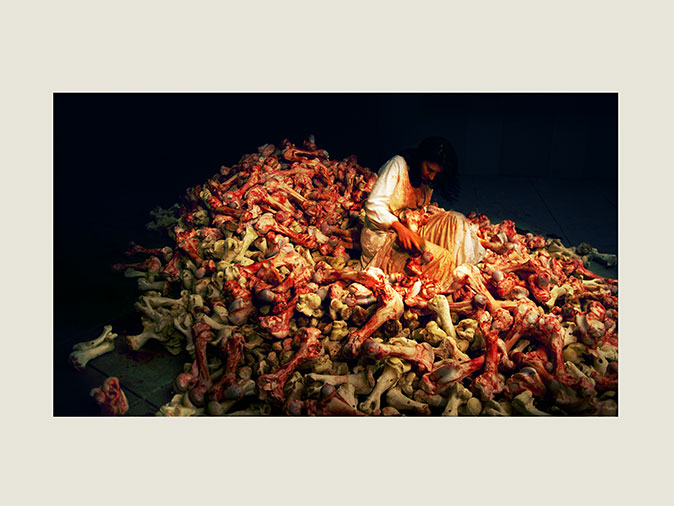 Following the recent publication of Marina Abramović’s memoirs, Mika Ross-Southall examines the life and work of the artist- ‘there is something admirable, if sociopathic, in Abramović’. The full article can be read on the London Review of Books website:

When Marina Abramović dies, she wants three graves. One in Belgrade, one in Amsterdam and another in New York (the three places where she’s lived the longest), she tells us in her compelling memoir Walk Through Walls. Her body will only be in one of them, though, and no one is to know which. To turn her own death into a kind of performance piece is no surprise from Abramović, whose performance art over the past half-century has been saturated in autobiography. At the Venice Biennale in 1997, for example, she sat in a basement on top of hundreds of bloody cow bones, scrubbing them clean with water and a metal brush for four days, six hours a day. Still images of her mother and father flashed on two screens in the background, while a video showed Abramović in a white laboratory coat and glasses telling a story about starving a rat so much that it turns on its own family; she then did a striptease, pulled a red scarf from between her breasts, and danced a jig. The smell was repulsive, but the audience were transfixed by “Balkan Baroque” and she won the Golden Lion.

With this memoir comes another performance. “I come from a dark place”, she tells us, describing her childhood in Communist post-war Yugoslavia. Her parents had a tumultuous, tense marriage: they both slept with loaded guns on their bedside tables. “I used to think my birth destroyed the symmetry”, she writes several times. But her family was privileged; her parents were favoured war heroes, high up in the Party, and they lived in a grand apartment. Here Abramović had a bedroom as well as a painting studio, when the majority of families in Belgrade in the 1950s were crammed into single rooms (art was one of the few luxuries encouraged by her mother, who was the director of the Museum of the Revolution). “Later I discovered [the flat] had once belonged to wealthy Jews, and had been seized during the Nazi occupation”, she says. A revelation followed immediately in the book by a black-and-white photograph of her young parents smiling in their military uniforms. “Our home was really a horrible place.”

Her mother beat her – punishment she was expected to endure “without complaint”. “I think that, in a certain way, my mother was training me to be a soldier like her” with “walk through walls determination – Spartan determination”, she says. But her father had named her after a Russian soldier he’d been in love with: “My mother resented this old attachment deeply – and, by association, I think she resented me, too”. On Marina’s fourteenth birthday, her father gave her an ivory-engraved pistol and took her to a strip club.

Walking Through Walls is published by Fig Tree (£20.00)