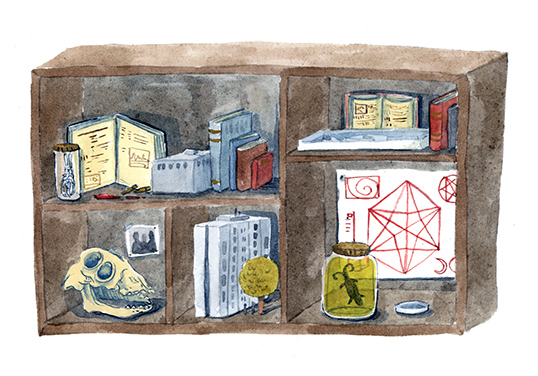 We are delighted to be publishing Olga Tokarczuk’s Flights in May 2017. Olga Tokarczuk is one of Poland’s best and most beloved authors. In 2015 alone she has received the Brueckepreis and the prestigious annual literary award from Poland’s Ministry of Culture and National Heritage, as well as Poland’s highest literary honor, the Nike, and the Nike Readers’ Prize. Here is a short excerpt from Jennifer Croft’s translation of Flights:

I studied psychology in a big, gloomy Communist city. My department was located in a building that had been the headquarters of an S.S. unit during the war. That part of the city had been built up on the ruins of the ghetto, which you could tell if you took a good look—that whole neighborhood stood about three feet higher than the rest of the town. Three feet of rubble. I never felt comfortable there; between the new Communist buildings and the paltry squares there was always a wind, and the frosty air was particularly bitter, stinging you in the face. Ultimately it was a place that still, despite construction, belonged to the dead. I still have dreams about the building where my classes were—its broad hallways that looked like they’d been carved into stone, smoothed down by people’s feet, the worn edges of the stairs, the handrails polished by people’s hands, traces imprinted in space. Maybe that was why we were haunted by those ghosts. When we’d put rats in a maze, there was always one whose behavior would contradict the theory and would refuse to care about our clever hypotheses. It would stand up on its little hind legs, absolutely indifferent to the reward at the end of our experimental route; disdaining the perks of Pavlovian conditioning, it would simply take one good look at us and then turn around, or turn its attention to the unhurried exploration of the maze. It would look for something in the lateral corridors, trying to attract attention. It would squeak, disoriented, and then the girls, despite the rules, would usually take it out and hold it in their hands. The muscles of a dead, splayed frog would flex and straighten to the rhythm of electrical pulses, but in a way that had not yet been described in our textbooks—it would gesture to us, its limbs making clear signs of threats and taunts, thereby contradicting our hallowed faith in the mechanical innocence of physiological reflexes. Here we were taught that the world could be described, and even explained, by means of simple answers to intelligent questions. That in its essence the world was inert and dead, governed by fairly simple laws that needed to be explained and made public—if possible with the aid of diagrams. We were required to do experiments. To formulate hypotheses. To verify. We were inducted into the mysteries of statistics, taught to believe that equipped with such a tool we would be able to perfectly describe all the workings of the world—that ninety percent is more significant than five. But if there’s one thing I know now, it’s that anyone looking for order ought to steer clear of psychology altogether. Go for physiology or theology instead, where at least you’ll have solid backing—either in matter or in spirit—instead of psychology’s slippery terrain. The psyche is quite a tenuous object of study. It turned out it was true what some people said about psychology being a major you choose not because of the job you want, or out of curiosity or a vocation to help others, but rather for another very simple reason. I think all of us had some sort of deeply hidden defect, although we no doubt all gave the impression of intelligent, healthy young people—the defect was masked, skillfully camouflaged at our entrance exams. A ball of tautly tangled emotions breaking down, like those strange tumors that turn up sometimes in the human body and that can be seen in any self-respecting museum of pathological anatomy. Although what if the people who administered our exams were the same sort of people, and in reality they knew exactly what they were doing? In that case, we would be their direct heirs. When, in our second year, we discussed the function of defense mechanisms and found that we were humbled by the power of that portion of our psyche, we began to understand that if it weren’t for rationalization, sublimation, denial—all the little tricks we let ourselves perform—if instead we simply saw the world as it was, with nothing to protect us, honestly and courageously, it would break our hearts. What we learned in college was that we are made up of defenses, of shields and armor, that we are cities whose architecture essentially comes down to walls, ramparts, strongholds; bunker states. Every test, questionnaire, and study we conducted on each other, as well, so that by the time we got through our third year I had a name for what was wrong with me; it was like discovering my own secret name, the name that summons one to an initiation.