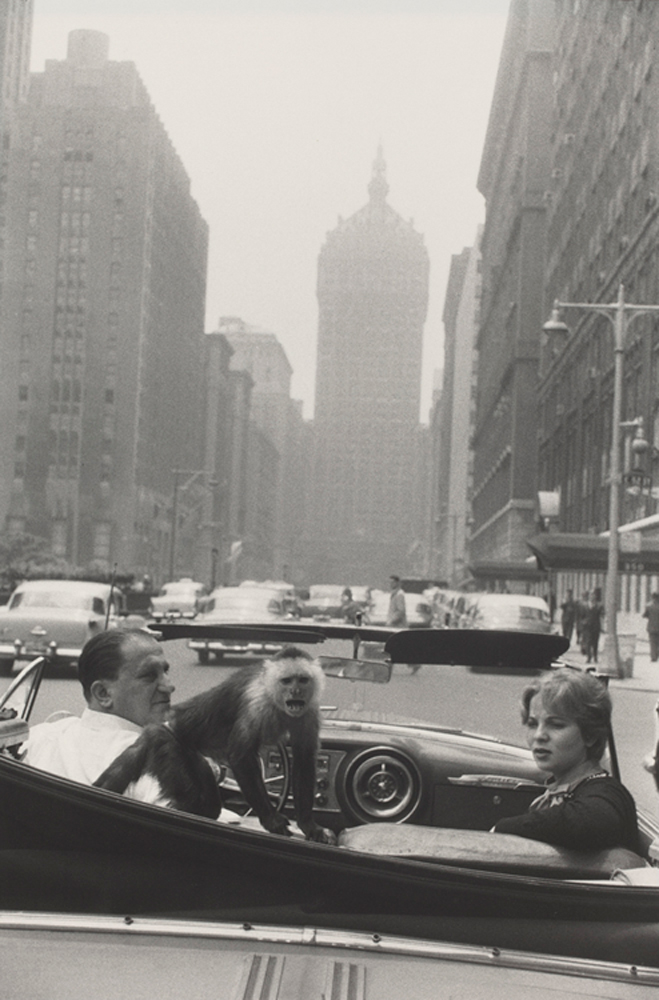 Anybody visiting Paris between now and 8 February 2015: go see the Garry Winogrand retrospective at the Jeu de Paume. And read Geoff Dyer, possibly the only critic who gets away with not going to see shows he chooses to write about, on Winogrand. It’s the same show, and Dyer almost certainly hasn’t seen its Paris incarnation either, so this piece is fresh as ever:

I didn’t make it to the huge Garry Winogrand retrospective at the Museum of Modern Art in San Francisco but if the very large catalogue is anything to go by the show was obviously … not nearly big enough!​＊ How could it have been? Winogrand is inexhaustible. There’s probably more to look at in a Winogrand photo than in one by anyone else (part of the attraction of a wide-angle lens was the way it enabled him not only to get more people in the picture but also to cram the frame, so to speak, with the space between them) and still we want more photographs. He shot more film than almost any other photographer, so much that he was unable to keep up with the editing, gradually gave up trying to do so and, by the end, had pretty much stopped looking at – or processing – what he’d shot. The much quoted claim that he photographed ‘to find out what something will look like photographed’ became, effectively, ‘to not bother finding out what something will look like photographed, to photograph for the sake of photographing’. Or – this was the high-stakes wager – had he so internalised what photography did to things that he no longer needed to look? John Szarkowski, then the head of photography at MoMA in New York, considered the man he had championed so enthusiastically (‘the central photographer of his generation’) wholly profligate in his last years: a profligacy that was also a symptom of a desperate loss of direction. As the curator of the new show, Leo Rubinfien, points out in the main essay in the catalogue, we can’t properly speak of a late period in Winogrand’s work; he became ill and died too suddenly, at the age of 56, for that. If he had lived longer would what we regard as his last work have proved to be a phase through which he passed on the way to a properly developed ‘late’ period? Or should one speak of terminal overproduction in the way that one speaks of terminal illness?

Part of the idea behind the show is to reconsider the work made in Winogrand’s final years. The enormous deck is reshuffled, the cards are arranged in a new way and the verdict is more nuanced, but the conclusion is not so different from the one Szarkowski came to in the 1988 retrospective: a much smaller number of successful pictures resulted from a larger reservoir of images. And our response remains fundamentally unaltered too: we wanna see ’em anyway! More from the early years, more from the mature period, more from the last years even if much of it’s not worth seeing. Winogrand, the photographer as addict, is the addict’s photographer. The more you feed the Winogrand habit the more Winogrand you crave.

Partly this is because of the sheer quantity of data amassed by Winogrand, the mind-blowing amount of information he provided about the social landscape of America in the 1960s and 1970s: suits, dresses, jackets, lapel widths, hairstyles, body shapes, faces, drinks, food, cigarettes, architecture, airports, pets, cars – everything. But it’s far more than the thoroughness and extent of this animate inventory that makes Winogrand so important. Taking his lead from Georg Lukács, George Steiner wrote of Balzac that when he ‘describes a hat, he does so because a man is wearing it.’ Granted, in photography hats are forever being verbed – worn, carried, tipped – but it’s helpful to see Winogrand as a visual novelist whose work was a sprawling human comedy. Or perhaps as a dance to the stilled music of photographic time, with a cast of thousands, that stood no chance of ever being completed. (Winogrand admired Norman Mailer, rivalled him in scope, energy, ambition – and in a disdain for any internal system of brakes. As it happens, he photographed Mailer at his fiftieth birthday party in 1973, on the receiving end of a finger-wagging lecture from a guest, so that the picture seems silently captioned by the Winograndian imperative: ‘Look!’)

Winogrand turned the canyons of midtown Manhattan into a white-water flow of people, rapids of entanglement giving way to pools of unexpected calm. But he wasn’t simply a New York photographer-novelist. Convinced that Robert Frank had missed out on the real story of America in the 1950s – the story of the suburbs – he made his way across the country, and his travels put him in an entirely different relation to photographic and physical space. He left New York for good, settling first in Austin, Texas, then Los Angeles.

So you look at this wonderful, sumptuous catalogue and feel simultaneously replete – and curiously short-changed. Where, for example, is the colour work glimpsed in the book put together by Trudy Wilner Stack, 1964, the year Winogrand was on a roll, driving through the States on a Guggenheim Fellowship and making brilliant image after brilliant image? Wasn’t there more colour stuff in the vaults of the Center for Creative Photography in Tucson? (How fitting that Winogrand’s archive ended up there, as if only the vastness of Arizona could accommodate the sheer mass of material.) If there’s colour work in the show, how come it’s not in the catalogue?

It’s inevitable but slightly disappointing that many of the pictures that are in the catalogue are already familiar. Naturally, in a retrospective we expect to be treated to an artist’s greatest hits. And part of the reason for the moreishness of Winogrand is that there’s always more to see in – and learn about – an image that one already knows well. Szarkowski’s claim that Winogrand’s best pictures were ‘not illustrations of what he had known, but were new knowledge’ holds good for the viewer too. A few years ago, I wrote about a picture of Winogrand’s in which a hip young woman is putting coins in the cup of a blind and deaf African-American on a crowded street in midtown Manhattan in about 1968. There’s a lot going on in this picture, and I felt pretty smug about having noticed so much of it. Then the photographer Tod Papageorge – an informal pupil of Winogrand who became his friend and who has contributed an essay-memoir to the new catalogue – pointed out that I had failed to spot one very striking thing: the woman is the actress Ali McGraw, a couple of years before she broke the world’s heart in Love Story. So this picture is, along with everything else, a celebrity portrait. Winogrand papped Ali McGraw! (Thus alerted, I went celebrity-stalking through Winogrand’s pictures. Although his face is partly obscured, the guy kissing his girlfriend at an airport – location and date unknown – on page 51 of the posthumously compiled Arrivals & Departures – looks incredibly like the young Bob Dylan. He even has a pen in his shirt pocket! During this deranged phase of research I was also struck by the way that Winogrand himself looked, for a while, rather like Dave Eggers.)