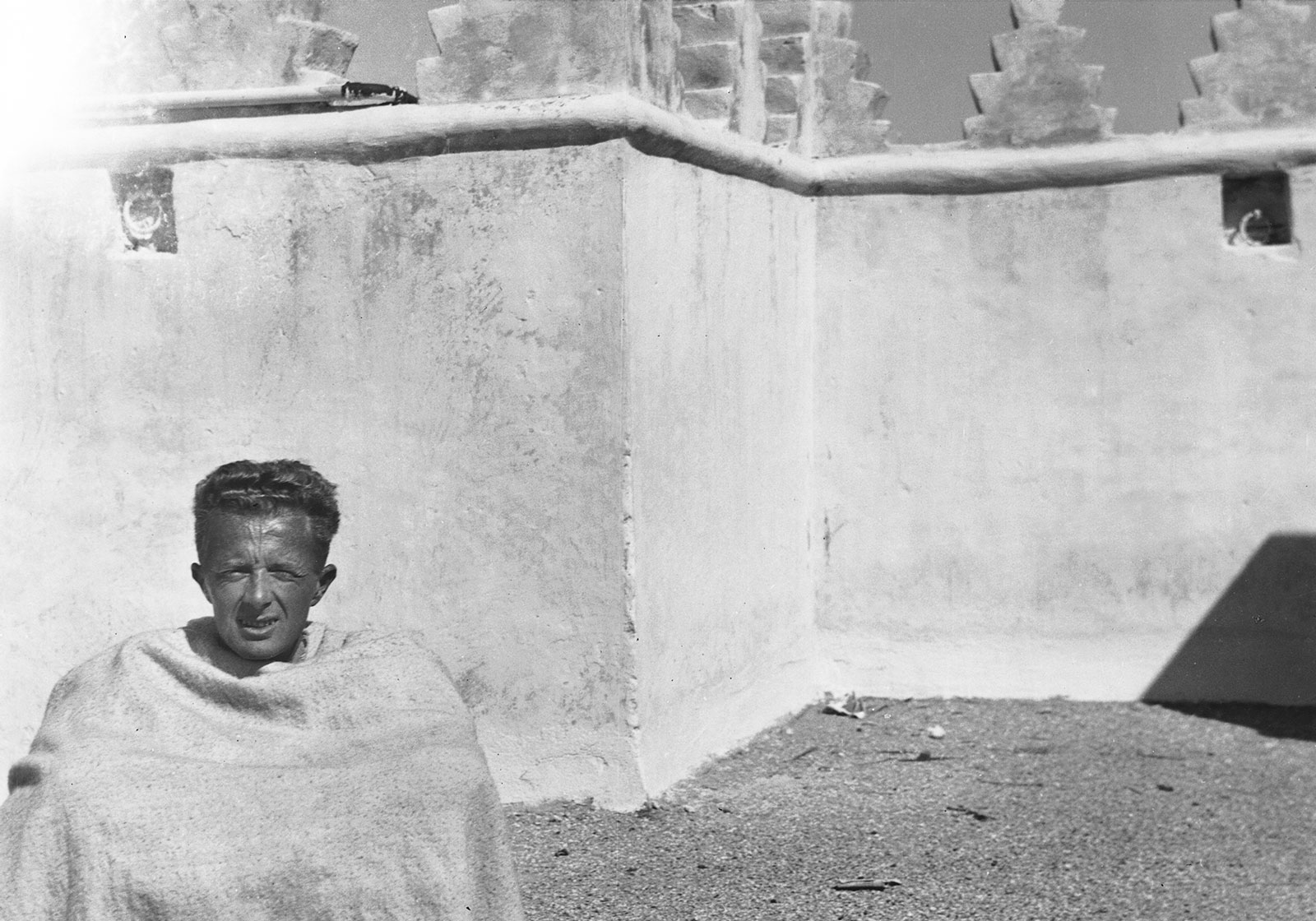 Years before writing The Sheltering Sky, Paul Bowles was making sound recordings of traditional music in Morocco. Writing for the New York Review of Books, Adam Shatz tells the story of what happened to those sounds:

In 1931, a twenty-one-year-old American composer in Paris named Paul Bowles visited Morocco at the suggestion of Gertrude Stein. His travel companion was his composition teacher, Aaron Copland. They rented a home in Tangier, where Bowles, a composer of svelte, jazzy music in the Poulenc mould, wrote one of his first scores, an impressionistic piano piece called “Tamamar,” after a village in the Atlas mountains. Copland was unsettled by the clamor of drums during wedding season, and thought Tangier a “madhouse,” but Bowles was enraptured. He collected 78s of local music, just as he had collected old blues recordings back home, and sent copies to Béla Bartók. “When I first heard Arabic music on records,” he recalled later, “I determined to go and live where I could be surrounded by sounds like those, because there seemed to be very little else one could ask for in life.”

By the time Bowles finally moved to Tangier, with his wife, the writer Jane Bowles, in 1947, he had refashioned himself as a novelist, and was busy writing The Sheltering Sky, the tale of American expatriates in Morocco that remains his best-known work. Yet it was in large part the music of Morocco that led him to make his life there. A decade later, on a grant from the Rockefeller Foundation, Bowles travelled throughout Morocco, recording traditional music of a startling variety—Berber, Arabic, Andalusian, and Jewish—for the Library of Congress. For years known mostly to specialists, the recordings from that remarkable project have now been re-edited and re-released in a meticulously prepared box set by Dust to Digital, Music of Morocco.

Morocco was rich in hypnotic sounds, and in his novels Bowles described them with a composer’s precision. In Let It Come Down (1952), he recreated a scene he had witnessed at a concert in Chefchaouen, where a man went into a trance, slashing his arms with a long knife and covering himself in blood, as he danced in “perfect rhythm with the increasing hysteria of the drums and the low cracked voice of the flute.” John Stenham, the hero of The Spider’s House (1955), imagines that he can find his way blindfolded through the old city of Fez merely by listening to the sounds of footsteps and water:

taut, metallic reverberations…shuddered between the walls like musical pistol shots. There were places where his footfalls were almost silent, places where the sound was strong, single, and compact, died straightaway, or where, as he advanced along the deserted galleries, each succeeding step produced a sound of an imperceptibly higher pitch, so that his passage was like a finely graded ascending scale, until all at once a jutting wall or a sudden tunnel dispersed the pattern and began another section in the long nocturne which in turn would disclose its own design.

As Bowles saw it, Morocco’s sounds were forms of experience that had yet to be contaminated by Western influence. In his 1981 preface to The Spider’s House, Bowles explained that he had naively “imagined that after Independence the old manner of life would be resumed and the country would return to being more or less what it had been before the French presence.” To his horror, the Moroccan government embarked on modernization “with even greater speed” than the French. The Music of Morocco, a double LP featuring twenty-two selections of his recordings, was his attempt to preserve Morocco’s heritage before its inevitable dissolution: “a fight against time and the deculturizing activities of political enthusiasts,” as he wrote in his grant proposal to the Rockefeller Foundation.

To listen to Music of Morocco is to experience the shock of the old: a ritualistic art that casts a spell through repeated, cyclical patterns, rather than the harmonic development typical of Western music. The first track—a Berber dance piece known as an ahmeilou, performed by Maallem Ahmed and his ensemble—immediately throws the listener into a world where music is supremely social. Five of the thirteen men are playing small drums that sound somewhat dry because they were heated before the performance; the other men are clapping. The tempo gradually quickens, the polyrhythms assuming an insistent force as some of the men cry with pleasure. Music of Morocco features a range of singing styles—ululation, ecstatic wailing, drone-like riffs, even a kind of Arabic sprechstimme—as well as an array of indigenous instruments, including the gnbri, an Arabic lute; the kamenja, a violin played in the manner of a viola da gamba; and the rhaita, a reed whose sonorous, almost chewy tonality is somewhere between an oboe and a bagpipe. But the foundation of the music here is percussion. It can be a highly intricate affair, performed by virtuosic drummers, but it can also be as homespun as a brass tea tray being struck by two teaspoons.

In “Hadouk Khail,” a stunning example of the haouziya genre, we hear a group of singers—three women and one man—for nearly thirteen minutes, often in call and response, accompanied by the drone of two kamenjas and a variety of small percussion instruments. The singers repeat their lamentation—the haouziya was famous for expressing despair—but because no drum is struck twice in succession, the performance has an entrancing stop-start quality, a feeling of eternal return, until the final moments, when the drumming accelerates and the singers cry in unison. Bowles wrote in his field notes that “ecstatic expressions” appeared on “the faces of those singing and playing it,” adding that “the performers seemed finally able to reach some unnamable state which the music strives to induce in the group-psyche of those performing it.”

When the Library of Congress released Bowles’s recordings in 1972, only a few hundred copies were printed. One of its early admirers was an aspiring young ethnomusicologist, Philip D. Schuyler, who struck up a friendship with Bowles in Tangier. When Bowles was contacted in the mid-1990s by Bill Nowlin, a co-founder of Rounder Records, about reissuing Music of Morocco, he encouraged Nowlin to talk to Schuyler. As Schuyler immersed himself in the sixty hours of recordings, he decided that Bowles had chosen the best-recorded examples from the sessions, but that in his effort to be encyclopedic he had made misleading cuts, prising excerpts he fancied from longer performances. Schuyler proposed to restore those pieces to their original form, and to include eight additional tracks, roughly doubling the length of the album. In June 1999, he flew to Tangier with a mock-up of the re-release and played his cassettes for Bowles. “He was very frail and nearly blind,” Schuyler told me, but “he was gracious to the end.” A few weeks later he faxed his approval. Bowles died in November of that year, at eighty-eight.

It took another seventeen years for Schuyler to complete the project. As Schuyler told me: “I was having trouble satisfying all the people I thought should be given a fair hearing in the notes—Bowles and the Bowlesians, my colleagues in academia, and Moroccan musicians.” It was worth the wait. Music of Morocco includes not only four hours of arresting music, but a revelatory 120-page booklet, which features a preface by Lee Ranaldo of Sonic Youth and Schuyler’s erudite overview. Each of the thirty tracks is annotated by three “streams” of text—Bowles’s original liner notes; additional writings by Bowles about his trip; and Schuyler’s commentaries. Throughout the booklet, Schuyler provides a tactful, often witty corrective to Bowles’s assumptions about “primitive” music (a word he used as a term of praise), and to Bowles’s own account of how he made his recordings. Yet Schuyler also defends Bowles against those who have dismissed him as a condescending expatriate, or Orientalist parasite.

Bowles set off on his first recording expedition in mid-July 1959 in a Volkswagen Beetle that belonged to a Canadian expatriate friend, Christopher Wanklyn. He was forty-eight years old, and was making his living as a travel writer, having recently published The Spider’s House, which turned out to be his last novel set in Morocco. His two companions were Wanklyn and a Moroccan assistant, Mohamed Larbi Djilali. Over the next five months, they took four separate trips—covering a distance Bowles estimated at 25,000 miles—returning to Tangier for a few days after each journey so that Bowles could check in on his wife, who was ill. Bowles recorded 250 pieces of music, in twenty-two separate locations, with an unwieldy twenty-eight-pound Ampex 601 tape recorder. “He did it as a marathon,” Schuyler told me. “Bowles like to project this lackadaisical manner but he really worked hard, and he had to have this finished by December 31, under the terms of his grant.”

The logistical difficulties were not small. He spoke French and passable Arabic but no other indigenous languages. Bowles often had to transport musicians to towns along the main road where there was electricity—in one case to a military base. He arrived in the town of Aït Ourir, east of Marrakech, with thirty-two loaves of sugar—one for each of the musicians, an arrangement he had made with the caïd, the local notable who organized the recording—only to discover that a dozen musicians had been added to the ensemble. (The caïd solved the problem by taking all the sugar for himself and dividing it later.) While traveling through the Anti-Atlas mountains, Bowles and his companions were caught in a sandstorm that disabled their car for several days. Then there was the journey through the Rif mountains, along the eastern border with Algeria, where nationalist rebels were fighting the French army. Bowles wrote in his diary: “I don’t relish being ambushed by dissident troops in the Rif or along the Algerian frontier.”