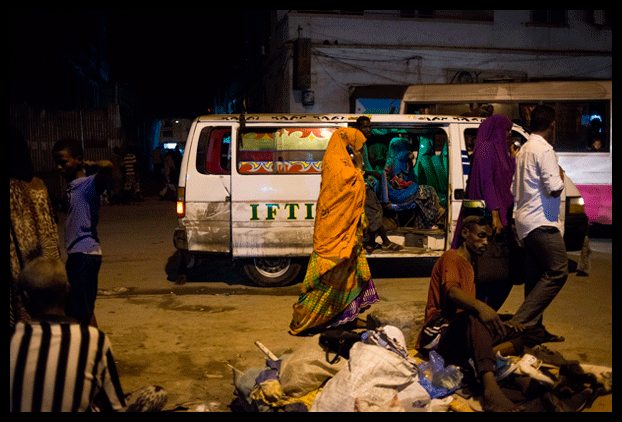 Laura Kasinof travels to Djibouti to investigate the Yemeni refugee crisis in the gulf of Aden, for Harpers magazine:

We traipsed across a muddy, trash-strewn creek bed in Djibouti City. Om Sakhr had insisted we chat someplace pleasant, and this was the way to the garden. She was dressed in a wispy black abaya and hijab, her lips painted a tart red. Her strappy heels weren’t exactly suited for the walk. But after several minutes, we reached a wicker table beneath long palms, tucked away in one of the city’s residential districts, a welcome respite from the afternoon sun.

A few weeks earlier, in April, 53-year-old Om Sakhr, along with her youngest son, Sakhr, arrived in Djibouti by boat after fleeing their home in Yemen’s southern port city Aden, now the center of the country’s civil war. (Om Sakhr translates to “mother of Sakhr”; she asked me not to use her real name.) In Aden, she had been a women’s rights activist. I asked her what she does with her days in Djibouti City. “Here, I don’t have any work except flipping through CNN, Al Arabiya, BBC, and Al Jazeera,” she told me, so she could keep up with the war in Yemen, where her husband still lives. “It’s not good for your psyche, but what else will I do?”

Om Sakhr suffers a common feature of refugee life: she waits. She waits for peace so she can return to her home, or for options—a job opportunity or a visa—so she can move on and try to establish a new life. Right now, none of these are available. Some Yemenis I met in Djibouti said they didn’t like being labeled refugees because they associate the term with the thousands of Somalis who used to pour into their country, fleeing violence and famine—but now they are desperate too.

Yemen’s long-simmering conflict reached a tipping point in February, after a rebel group of Iranian-supported Houthis attacked cities throughout the country and forced out Yemen’s president, Abdu Rabbu Mansour Hadi. In March, a Saudi Arabia–led coalition responded to the uprising by carrying out a series of airstrikes on Houthi targets. Later in the month, the coalition imposed a blockade on Yemen’s ports, cutting the country off from crucial imports such as medical supplies and fuel. The Houthis, with support from fighters aligned with former president Ali Abdullah Saleh, have been engaged in bloody street battles in Aden for nearly two months.1Neighborhoods have been reduced to rubble.

When Om Sakhr’s boat took off from Aden’s shores, she watched her beloved home, a beautiful coral-white city, disappear in the distance. “I never thought I’d leave Aden like that,” she said. “I was born in Aden and spent all my life in Aden, so taking me out of Aden is like breaking me down. It is not something I want to think about again.”