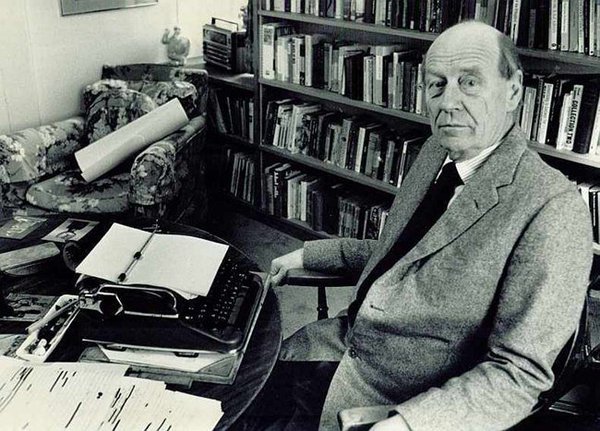 We are saddened to hear of the passing of the Irish novelist, playwright and short story writer William Trevor, aged 88. Here is an extract from his interview with Mira Stout for the Paris Review in 1989:

William Trevor first achieved prominence with the publication of his second novel, The Old Boys (1964); but perhaps he is best known for his volumes of short stories, including The Day We Got Drunk on Cake (1968), Angel at the Ritz and Other Stories (1976), winner of the Royal Society of Literature Award, and The News from Ireland (1986). His other novels include The Children of Dynmouth (1977), winner of the Whitbread Prize for Fiction, Fools of Fortune (1983), and most recently Silence in the Garden (1988).

Trevor met me at the Exeter railway station on a chilly, drizzly February morning, cutting a rather startling figure on the platform in his matching tweed greatcoat and deerstalker hat. Although my train had kept him waiting for nearly an hour, he was smiling when I arrived, and even apologized ambassadorially for British Rail’s inefficiency.

Trevor lives in a ruined mill in the green countryside of Devon, with his wife, Jane. They also spend a few months of the year in Tuscany and go back regularly to Ireland, where he was born. The interview took place in the sitting room of their Victorian farmhouse, where a small fire burned in the hearth. Books lay neatly stacked on a side table amid fringed lampshades, and the walls were bare with the exception of a few Redouté prints. Windows curtained in Wedgewood-blue velvet opened out over rolling downs. Trevor settled languidly into an armchair, crossed his long legs, and bore the expression of a man who had just fastened his seat belt for a long and possibly perilous airplane ride.

Nearly sixty, William Trevor is youthfully slender. In his brown cardigan, tweed tie, and corduroy trousers he resembled a kindly country schoolmaster. Sunk deep into the velvet cushions, Mr. Trevor spoke for nearly four hours—sometimes rambling generously, and at other times shutting down completely if the question was too personal. He was so detached in speaking about himself one might have thought he was discussing someone he vaguely remembered meeting at a party. After several hours we broke for a hearty luncheon of turkey pie, homemade vegetable soup, cheese and fruit, and a delicious bottle of Montepulciano chianti.

By the end of the interview it was dark, and we had a celebratory drink. It was only after the tape recorder had been put away that Mr. Trevor, clutching a brimming glassful of sherry, laughingly admitted that twenty years previously he himself had been dispatched to conduct a Paris Review interview. He had failed, in fact, to get the formidably taciturn Anthony Powell to do any talking whatsoever. They admitted defeat almost immediately, he recalled, and spent most of the afternoon stalking the estate grounds in an uncomfortable silence. Although I sympathized with his predicament, I was nonetheless grateful that the memory prompted him to be so dutiful a subject.

What did you do after leaving university?

When I left Trinity Dublin, I tried to get a job, and it was very difficult in those days—in the 1950s in Ireland. Eventually I found an advertisement in a newspaper that said someone’s child needed to be taught. “Would suit a nun” it suggested at the end of it, which was interesting, and I actually got that job. So I used to leave Dublin every day on the bus, go about twenty-five miles into the country, and teach this rather backward child. Her mother brought in the neighbor’s children, and a little academy was formed.

Why had they asked for a nun?

Because nuns sometimes have time on their hands. It was half a day’s work, which was enough to live on, and this went on for about a year. I wasn’t interested in writing in those days. I left that job when I got married, and then worked in a school in northern Ireland for about eighteen months, before the school went bankrupt. We had to leave Ireland after that because I couldn’t get another job. I taught in a school in England for two years or so—in the Midlands near Rugby—before deciding to try and make a living as a sculptor. I came down to the west country and set myself up, rather like Jude the Obscure, as a church sculptor, and existed like that for seven years. Then, when our first child was about to be born, it was clear that the money couldn’t be spread between three people, so I gave that up, and got a job writing advertisements—which I was very lucky to get because I knew nothing about it. I was thirty. We moved to London, and I wrote advertisements for some years, always on the point of being sacked.

Because I was extremely bad at it. It was then that I began to write short stories. I was given a typewriter and endless cups of tea. I was always allowed to spend days and days over an advertisement, because they were regarded as so very important. If I was writing, for instance, four lines about paint, they wouldn’t expect to see any copy for two days. I couldn’t take that seriously so I began to write stories. I wrote The Old Boys while I was there, and two other novels I think.

Not entirely. But I did photocopy one of my novels on the company machine. The poet Gavin Ewart, who also was at the agency, refers to that in one of his poems: “Later we both worked at Notley’s—where no highbrow had to grovel / and I remember Trevor (with feminine help) xeroxing a whole novel. / ‘I see you’re both working late,’ the Managing Director said / as he went off to his routine gin and tonics and dinner and bed.” In the end I persuaded them to allow me to work two days a week, but I abused that privilege. Jane and I went to Bruges one weekend and didn’t come back. I’d left some firm in the Midlands in the lurch. I resigned just as I was on the point of being sacked. I’ve always had an uneasy relationship with employers.