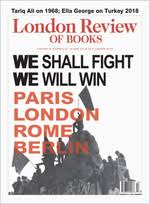 Sally Rooney’s vital essay on abortion and women’s rights in Ireland and the upcoming Eighth Amendment referendum, featured in the London Review of Books:

In 1983, a referendum was held in Ireland to establish a constitutional right to life for embryos and foetuses. Abortion was not legal in Ireland at the time; it never has been. The referendum was the result of a campaign by conservative religious groups aimed at preventing any future legislation permitting abortion in any but the most extreme, life-threatening circumstances. The Eighth Amendment passed, gaining 67 per cent of the vote. On 25 May, another referendum will be held on whether to repeal that amendment. This one won’t pass so easily – if it passes at all.

So far the campaign has been distinguished by acrimony, falsehoods and a media obsession with ‘balance’ – an insistence that both sides must be given equal respect and consideration. Though campaign funding is strictly regulated by Irish law, there are questions about how effectively these regulations are being enforced, and in particular about the ‘No’ campaign’s links to anti-abortion organisations in the US. A group calling itself the Irish Centre for Bio-Ethical Reform, made up largely of American volunteers, has attracted media attention by protesting outside maternity hospitals in Dublin with banners showing dismembered foetuses. The group is connected to a US organisation called the Centre for Bio-Ethical Reform, whose leader, Gregg Cunningham, visited Ireland in January.

Across the country, ‘Save the Eighth’ posters depict gigantic, robust babies, as if the referendum concerned the health of six-month-old infants. But the subtext is clear: no matter what’s going on in a woman’s life, it’s always a good time to have a baby. One poster produced by the ‘No’ campaign shows an ultrasound image of a foetus below the caption: ‘I am nine weeks old. I can yawn & kick. Don’t repeal me.’ The Together for Yes campaign, which crowdfunded its largely text-based posters, has opted for slogans like: ‘Sometimes a private matter needs public support’.

By providing the foetus and the pregnant woman with an equal right to life, the Eighth Amendment prohibits abortion in all circumstances unless the life of the woman is at substantial risk. The threat of serious, permanent injury or illness is insufficient grounds for a termination. In 1992, a 14-year-old child who had been raped by a neighbour became suicidal as a consequence of the resulting pregnancy. After the attorney general issued an injunction to prevent her from travelling abroad for an abortion, the Supreme Court overturned the ruling, holding that suicidal feelings constitute a risk to life. Much of Ireland’s abortion debate since then – including a referendum in 1992 and another in 2002 – has hinged on whether the possibility of suicide does in fact constitute a sufficiently immediate risk. In 1992, 35 per cent of the population believed it did not.

The criteria by which doctors gauge a risk to life, as distinct from a risk to health, are still unclear. In 2012, a woman called Savita Halappanavar developed sepsis during a miscarriage. Aware that her pregnancy was no longer medically viable, and increasingly unwell as the infection spread, she asked for a termination. The request was refused, because the risk to her life was not deemed substantial. By the time she was ill enough to be allowed a termination it was too late. Halappanavar died of a cardiac arrest caused by the sepsis. The decision to hold the upcoming referendum was sparked by the public outcry that followed her death. Months after the story broke, the Protection of Life During Pregnancy Act was passed, setting out the processes by which pregnant women whose lives were endangered could access terminations – before then, no legal guidelines had existed for doctors or patients. In 2016, as demand for constitutional change continued to grow, the government set up a Citizens’ Assembly to look into the issue. The Eighth Amendment was no longer just about abortion; it was now about public health. Discussion focused on the most egregious consequences of the law: the fact that pregnant women with cancer had limited rights to access treatment that might endanger the foetus; that women had to continue with pregnancies that had been deemed non-viable; that children (and adult women) who had been sexually abused were forced to bear their rapists’ offspring.