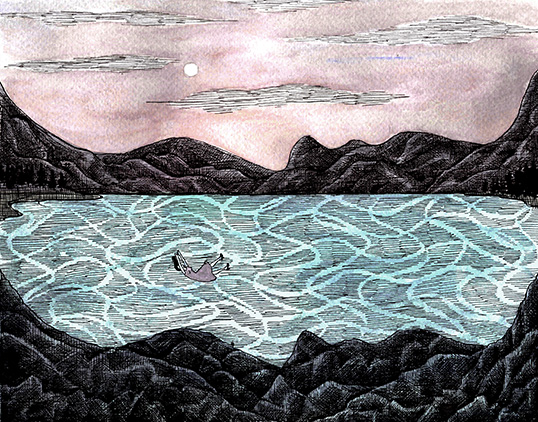 An extract from award-winning Slovakian writer Jana Beňová’s new novel, Seeing People Off. Translated from the Slovak by Janet Livingstone, appearing in the April 2017 issue of Aysmptote.

Elza. Together we ate grapes and washed them down with rosé. The next day I discovered a moist grape stem in my pocket. It looked like an undecorated Christmas tree. Kalisto Tanzi vanished from the city, which had been hit by a heat wave. The heat radiated from the houses and streets burning people’s faces, and the scorching town seared its brand onto their foreheads. I stopped in front of the theater window so I could read Kalisto’s name on the posters and confirm to myself that he did actually exist. I enjoy pronouncing his name, which tormented him throughout childhood and puberty and only stopped annoying him after my arrival. I walk slowly to the other end of the city, the muscles in my legs shake slightly in the hot air. It’s noon. The only things on the planet that are really moving are drops of sweat. They run down to the base of the nose and then spurt out again under my hair. I’m going to buy poison. Ian saw a rat in the crapper last night. The rat-catcher has a wine cellar underneath his store. Underground we escape the unbearable heat and drink. He’s telling me how intelligent the rats are. “They have a taster, who tastes food first. When it dies, the others won’t even touch the bait. So we now offer the next generation of rat bait. The rat only begins to die four days after consuming the poison. It dies from internal bleeding. Even Seneca confirmed that this sort of death is painless. The other rats think their compatriot has died a natural death. But even so, if several of them die in a short time, they’ll evaluate the place as unacceptable because of the high mortality rate and move elsewhere. This gift of judgment is completely missing in some people, or even whole nations.”