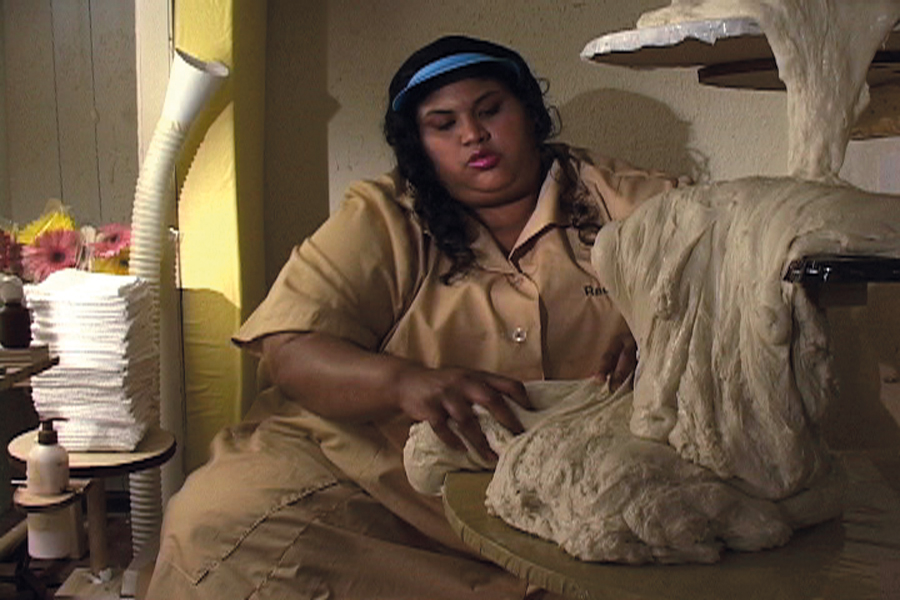 From blue collar to new affluence, Dan Fox tackles the issue of social class in the art world, for Frieze magazine:

Hyde Park, London. It’s 5 July 1969 and the artists Gilbert & George are walking through the crowd at the Rolling Stones’ concert in tribute to band member Brian Jones, found dead in his swimming pool two days earlier. In a photograph taken for the Daily Mirror newspaper, the artists are captured wearing light-toned suits, shirts and patterned ties, with carnation buttonholes, as if they are attending a society wedding. Yet, they look uncharacteristically dishevelled: ties askew, hair blowing in the breeze. Leslie Woodhead and Jo Durden-Smith’s documentary of the day’s concert, The Stones in the Park (1969), shows hundreds of flower children basking in the sunshine under the fractious eyes of the Hell’s Angels security detail. Amongst them, Gilbert & George look like bankers from an alien planet, there to out-freak the underground freak scene. One detail makes them fit in: metallic body paint on their faces and hands, which looks like badly applied fake tan. Yet, their mimicry of conservative British masculinity still manages to wrong-foot expectations of how artists or other creative types associated with old-fashioned avant-gardism should present themselves.

Gilbert & George costumed themselves as urbane gentlemen of the upper classes, but lived in a then-run-down area of east London. Their suits afforded them invisibility: a cloak of conformity that allowed them to forge ahead with their extraordinary project to make their lives into a total artwork. It was a look that, paradoxically, made them stand out amongst their peers in Swinging London because it suggested that nothing could be more conformist than growing your hair and slipping on a kaftan. But, more to the point, in class-neurotic Britain, their appearance gave the lie to assumptions as to which social bracket artists should dress for. Gilbert & George punctured a self-flattering affectation of blue-collar solidarity that persists amongst certain artists: the fantasy that artists are workers in the same way builders, firemen or mechanics are. (In her 1977 essay ‘The Pink Glass Swan’, Lucy Lippard describes artists who are ‘persistently working “up” to be accepted, not only by other artists, but also by the hierarchy that exhibits, writes about and buys her/his work. At the same time, s/he is often ideologically working “down” in an attempt to identify with the workers outside of the art context.’) Were Gilbert & George rich or poor? Upper-class toffs on the skids or lower-middle-class clerks on the rise? It was hard to tell.

That was, I suspect, the point. George was brought up by a single mother and worked a number of jobs in London – in Selfridges department store, as a barman at the Players’ Theatre Club – before meeting Gilbert at Central St Martin’s School of Art in 1967. Gilbert came from a family of shoemakers in a village in the Italian Dolomites. Did that matter? Certainly, gaming the visual codes of the British class system was folded deep into their artistic strategies. It was a way of making us laugh when they called themselves George the Cunt and Gilbert the Shit for their 1970 ‘magazine sculpture’, or when we watched them get tight on gin to the music of Edvard Grieg in their 1972 video Gordon’s Makes Us Drunk. For many artists from the UK, class is inescapable – a facet of work and identity. In 1990s Britain, artists such as Tracey Emin and Sarah Lucas actively played up their backgrounds. Tabloid headlines were appropriated to redefine conversations around female sexuality. The British working-class seaside holiday or the souvenir shop were used as tropes to talk about ownership and independence: in 1992, Emin and Lucas bought a beach hut in Whitstable and, the following year, they ran a shop together.