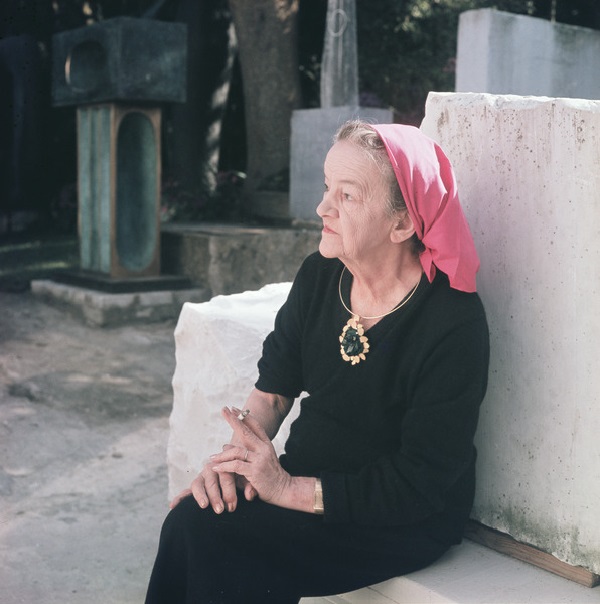 Where Ali Smith finds a ‘universe of meaning’ in the work of Barbara Hepworth, the Financial Times deduces that ‘female artists tend to assimilate and adapt radicality pioneered by men’. So here’s an extract from infinitely more valuable Smith piece.

It was a rainy sunny cloudy bright dark calm blustery day in May at the Hepworth Wakefield in Yorkshire and I was in a room full of forms between which I’d been ricocheting for an hour like a delighted pinball. “A Greater Freedom: Hepworth 1965-1975” displays pieces Barbara Hepworth made in the last decade of her life, full of the excitement of new technology and space exploration, lined all along one wall with her rarely shown Aegean Suite lithographs, startlingly vibrant sun, moon and planet abstracts like colourful constellations. It’s a room of works so dually modern and ancient-seeming that they make time irrelevant.

They were made when Hepworth was in her sixties and seventies and they are openly concerned with aesthetic and planetary genesis, the making of life and art out of matter. About them she said: “I don’t think anyone realises how much the last ten years has been a fulfilment of my youth.” A small bronze maquette, Three Hemispheres (1967), sat next to a photo of the Goonhilly satellite dishes. It looked quite feasible that the designers of those dishes might’ve borrowed directly from Hepworth in the making. “It so happened that I was invited to go on board the first one when it began to go round, and it was so magical and strange,” Hepworth is quoted saying on a wall-card next to both.

Imagine her, in her seventies, aboard a satellite dish. Eleanor Clayton, the curator of the two new exhibitions at the Hepworth Wakefield, explained about the creamy-silvery breeze blocks on which the exhibits were mounted, a direct reference to the 1968 retrospective of Hepworth’s work at the Tate in London, where she chose the beautiful utilitarian bricks herself and also arranged for the gallery to place plant life next to the exhibits in an effort to democratise the gallery experience and make it more organic. But the bricks had been difficult to source and Hepworth had had to spend quite a lot of her own money – £43, to be exact – finding the right ones. Clayton, too, had quite a time half a century later finding bricks to match. It costs, to be utilitarian.

Up came the subject of Barbara Hepworth’s chances of being chosen in the campaign for putting a visual artist on the new £20 note. Ah, but which Hepworth? One of us wanted Hepworth from the 1953 film by Dudley Shaw Ashton, Figures in a Landscape, smoking and carving in a most elegant evening gown. One of us favoured the glamorous Hepworth, in a big fur coat. One of us chose her standing in her headscarf and work-jacket, dwarfed by one of her own gigantic bronzes, looking up at it as if it’s sprung fully formed out of her head just moments ago. One of us chose a passport photo of her as a very young adult, beautiful, full of potential, already recognisably the self she would become.

That youthful picture is on show for the first time in the other new exhibition here, “Hepworth in Yorkshire”, whose focus is her formative years and whose display of photos, early plasterwork, drawings and paintings gives an intimate insight into both the early life and the work of the girl who cried out, when her mother took her to see the Albert Memorial in London, oh how frightful!; the girl who, aged 15, made a relief of some cousins using plaster from her uncle’s GP practice; the girl who won a scholarship to the Art College in Leeds at the age of 16, then transferred a year later to the Royal College of Art in London along with fellow students including Henry Moore, the others five years older than she was; even in her seventies she was inclined to say, when they were compared, “I’m younger than Henry . . . more in touch with the young people.”

Then we talked about slogans that might help with that £20 note campaign.

Burn a hole in your pocket, one of us said.

I love an art gallery you can laugh out loud in, and those Hepworth holes, the piercings through artworks we’ve come to associate with her, have always been a source of delight to many people. They were to Hepworth, too. She made the first one in 1931 or thereabouts, through a thick and curvy amorphous stonework. The original is long lost but in the photos that survive it’s as if you’re literally witnessing a piece of stone shifting its bulk to reach for its form. She talked, over the decades, about the “intense pleasure” this act gave her, especially because of its abstract nature, “quite a different sensation from that of doing it for the purpose of realism”. It was the start of her interest in what she would later term the “underlying principle of abstract form in human beings”. She called that first holey piece Sculpture, renamed it Pierced Form – a work that, simply by existing, could reframe the world it inhabited, make it possible to see through form and simultaneously see differently via form.

She is known for these holes, and for strings – at a certain point she began using strings over the hollows and holes of some of her abstract works, as if gesturing towards some mythical Orphean instrument, or conjuring a reminder of gut membrane. “The strings were the tension I felt between myself and the sea, the wind and the hills,” she wrote, both matter of fact and ­romantic. Henry Moore was dismissive, “a matter of ingenuity rather than a fundamental human experience”, he said of the stringing – as if ingenuity weren’t pretty fundamental to the human experience. “If every artist could truly, and with dedication, pull the string with which he was born – to the end – then a new concept could evolve,” Hepworth said in 1966, recalling her friendship with Piet Mondrian in a London full of cross-fertilisation between artists living and working together in the 1930s, London vibrant with pople who had left Europe in the rise of totalitarianism, all working in the face of the oncoming war. Those strings are somehow about such connecting, and also about stamina.

It is hard not to quote Hepworth’s own words about her art. She was an elegant articulator of her own and others’ work (keen in any case to represent herself: she usually took the official photographs of her work, and work by her second husband, Ben Nicholson, too, when they were together, for publicity and showing purposes; she happens also to have been a very good photographer). It’s going to get even harder soon not to quote her, since to coincide with the Wakefield shows and the big new Hepworth retrospective about to open at Tate Britain, the art historian Sophie Bowness, Hepworth’s granddaughter and trustee of her estate, has edited the first full collection of her writing, including transcriptions of her film commentaries and interviews. Barbara Hepworth: Writings and Conversations (Tate Publishing) is a witty and satisfying read.

“Your work is very organic,” an interviewer says to her in the 1970s. “It’s meant to be,” she replies. “I’m organic myself.” The book is full of small, brilliant revelations, such as her interest when she visited Brancusi’s studio in 1933 in how he used “great millstones” as the bases for his classical forms – maybe a source of her own penchant for breeze blocks? On a larger scale the collection prompts a rethink of any clichés to which we might have settled, over the years, about Hepworth and her work. “I think of landscape in a far broader sense,” says the artist it’s easy wholly to associate with the real landscapes of Yorkshire or St Ives; “I extend its meaning to include the whole universe.”