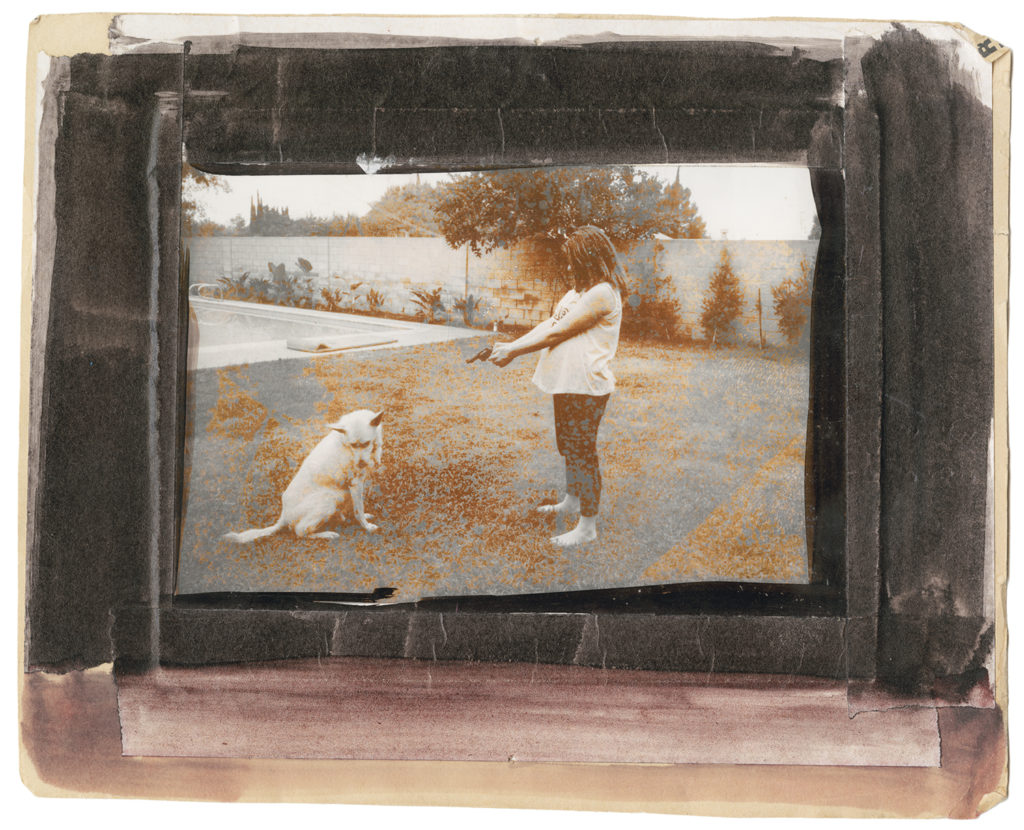 Friday?
Dad,
I’m really sorry about
losing control of myself
+ hurting you (+ the, “ahem”,
bathroom mirror).
I know + understand
that talk doesn’t mean a
damn thing to you by
now. (Especially from my mouth.) …

Some facts before things get messy. This unattributed note—handwritten as neatly as one’s science homework, its margin decorated with a ghostly heart—appears in Jim Goldberg’s mammoth book of photographs Raised by Wolves (1995), juxtaposed with a fuzzy snap of a scarecrow-like boy tilting forward as if hit by a windstorm. I think that boy is Tweeky Dave, a cadaverous teenage drug addict who died from liver disease circa 1993; he was, for a few years before his death, something of a celebrity urchin on the Los Angeles streets he used to haunt in search of opiates. He’s also the hero of Goldberg’s epic book, which chronicles the lives of various homeless kids in LA and its environs (shout-out to Echo, Marcos with the wonky eye, Wolfette, Vampchild—“this cute boy who says he’s a real vampire”—and Blade) and comes stuffed with transcripts of their conversations, faxes from Social Services, Polaroids, and other grungy ephemera testifying to the decade Goldberg spent shadowing his subjects. Tracking them through the book—on drugs, out of school, and running away from ogreish parents—also means confronting some of the gnarliest fallout from the Reagan-Bush years: the rapacious mutilation of education programs and social services, not to mention the, ahem, decline of the “family values” they claimed to protect. Tweeky Dave is just the most wretched embodiment of the trouble all those acts can cause.

“I’m really sorry about losing control of myself … ” Raised by Wolves is about what happens when the self gets lost amid all the drugs and dereliction as economics turn savage and parents disappear. Meanwhile, the kids are too spaced out to know what day it is.

Before Dave died, he liked to call Jim Goldberg “Dad,” too. Check that picture of a scar snaking up Dave’s stomach and it’s obvious that his real father, “a biker from hell,” shot him …

Or maybe he stabbed him?

Maybe he did neither: it depends how much you believe the stories coming from that junkie mouth, which, as Dave acknowledges, is famous for telling tall tales. Three hundred pages later, he’s on his deathbed playfully telling “Dad” to invite James Brown, “Trent from Nine Inch Nails,” Stephen King, and “Cher (what the fuck)” to his funeral. This sad event happens on a sunny day outside a Salvation Army Youth Center. Cher doesn’t make it. At its conclusion, the kids release balloons into the sky.

The, uh, “establishing shot” that opens the book shows a handsome pinewood house, hazy, shrouded by flowers, sleepy trees, and seen through some creep’s binoculars. When we talk on the phone, Goldberg tells me he was thinking about Buffalo Bill in Jonathan Demme’s The Silence of the Lambs (1991), the toad-voiced sociopath who abducts and kills innocent women after tracking their movements through his night-vision goggles. Lycanthropic vibes: we could be experiencing the perspective of the Big Bad Wolf lurking outside the house of a succulent little pig. There’s something storybook-like, upstate idyllic, about the picture, too, which may not actually show Echo’s mother’s real house at all but a weirdly familiar dream home liberated from elsewhere, giving extra resonance to her claim that what’s happened to her family could strike “any home in America.”

What Goldberg assembled in Raised by Wolves isn’t a real history, which wouldn’t be a fitting tribute to the kids since they never told the whole truth anyway, but something lyrical and a little feverish. Facts get high or vanish on their way through the night. “Some of the names,” Goldberg tells me, “have been changed to protect the innocent.” Verification is difficult when it’s tested against the kids’ habits of compulsive mythmaking, which is also a strategy for survival: I can’t be hurt if I’m not the real me.