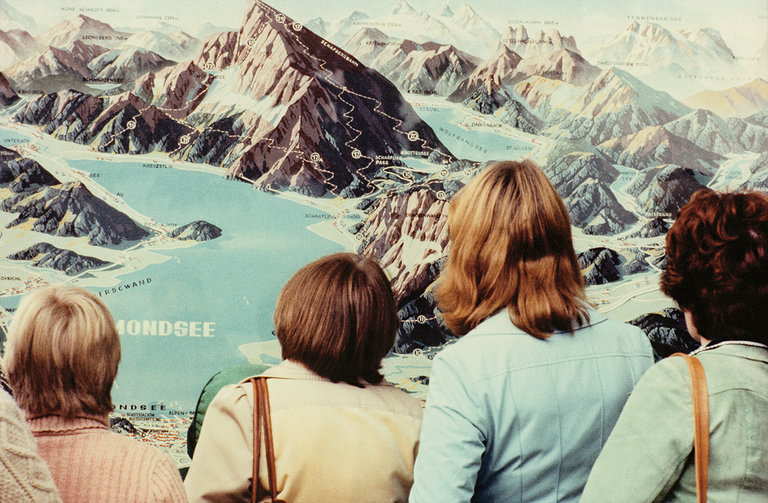 Author and photographer Teju Cole delves into the illusionary world of Luigi Ghirri for his New York Times Magazine column, On Photography:

I look at Luigi Ghirri’s work daily: There’s a postcard reproduction of one of his photographs on my fridge. It depicts four women, turned away from us and toward a mountainous landscape. They could be taking in an actual vista — the perspective is correct — but the mountains and their intervening lakes have text superimposed on them, and so we realize the women are standing before an image of a landscape, either a poster or a mural. Ghirri took the photograph in Salz­burg, Austria, in 1977. I find it reassuring, amusing (that slight stutter in parsing it), simultaneously simple and complex in ways that are difficult to explain.

Luigi Ghirri was one of the outstanding photographers of his generation. His work was largely made in Europe, and most of it focused on a small area of northern Italy, the region of Emilia-Romagna, where he was born and where he died, in 1992, of a heart attack at the too-young age of 49. Today, his work is in a peculiar posthumous phase, both celebrated and elusive. Perhaps no Italian photographer of the 20th century was more influential: There are traces of his gentle, lucid, cerebral style all over contemporary photography. As of a few years ago, I had seen his images in articles and exhibitions, but information about him was hard to come by. I bought several books dedicated to his work that were in Italian, a language I don’t read. An English-language collection, published as “It’s Beautiful Here, Isn’t It … ,” was in print but scarce.

Ghirri’s pictures are calm and mysterious — just a bit out of reach, like his books. His constellation of favored themes is distinct: maps, landscapes, windows, still lifes, interiors, fog, the seaside, the objects in artists’ studios, people obscured in some way and many images that test the divide between the world and an image of the world (murals, miniatures, postcards), often bearing an ironic gleam. You feel that in each picture there’s more than meets the eye, but the feeling remains unresolved.

Ghirri’s work is in full color, like that of William Eggleston, the American photo­grapher with whom he has the strongest kinship and who admires him greatly. But Ghirri does not share Eggleston’s intense hues, the angry reds and livid greens that Eggleston hunted down in unspectacular everyday subjects. Ghirri’s favored palette is pale, soothing, often tending toward pastel, as if the images did not wish to speak too loudly or overassert their presence. Contrary to the current trend in art photo­graphy, his pictures are printed small, sometimes no bigger than the size of a snapshot. On a gallery wall, even at such modest scale — or because of the scale — they are remarkably effective. In a group show, they stand out like brilliant individual lines of poetry amid the undifferentiated prose of much larger pictures.

The recent publication of “Luigi Ghirri: The Complete Essays 1973-1991” (Mack) enriches and complicates our sense of Ghirri’s achievement. Right from the beginning of his career, he wrote frequently and with great intelligence about his own work and the work of other photographers. “The Complete Essays” comprises 68 texts, most of them brief, in which he presents an allusive, fragmented and recursive account of his photographic philosophy. Some of his arguments can be abstruse, and rarely does he give interpretations of individual pictures. But at several moments, he produces lines of epigrammatic clarity that echo the lucidity of his photographs. “Every part of the landscape, from the roofs of houses to signs on walls, seems to await recognition via his loving eye.” The sentence, which appears in an essay on Walker Evans, applies very well to Ghirri himself.