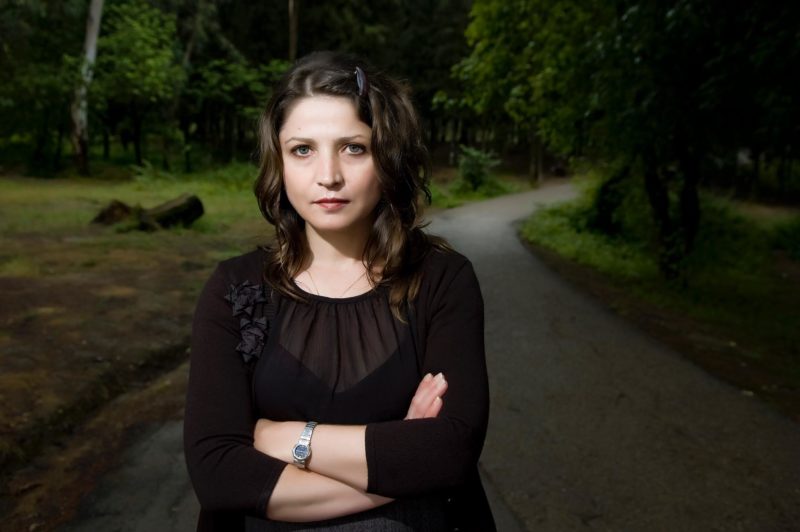 Albanian poet Luljeta Lleshanaku is interviewed by her translator Lucia Duero for Guernica:

Guernica: You grew up in communist Albania, under a dictatorship led by Enver Hoxha, who was in power from 1944 until his death in 1985. It was a climate characterized by oppression and isolation; religion was outlawed. In an already isolated country, your family’s political background—which included an uncle’s attempt to assassinate Hoxha—isolated you even further. What do you remember about that time?

Luljeta Lleshanaku: When I was three years old, my family moved to my mother’s hometown, Kruje. That is where I spent my childhood. The town had a beautiful landscape, set on mountains with a view of the Adriatic Sea. It was a conservative place, well-known for having done business with Italy before World War II. That’s why the people there were pragmatic, reserved, and skeptical. In my family there was no small talk, only talk about serious things like global politics—trying to interpret the distant political signs, looking desperately for some hope things would change. Religion was forbidden beginning in 1968, when I was born. So my communication with them was limited to issues of everyday life, which were issues of survival.

When I was in kindergarten, not quite six years old, I was part of a group of children who were being prepared to give a concert on television—then I was separated from them, without explanation. When I went home, sad and angry, my mother had to explain me that we were “different.” Our family had what she called a “bad biography”—as an anti-communist family, we were condemned. Later I had to face this kind of situation all the time. Our family was like a quarantine: No one could escape, and no one could get in. We were rejected. So I was prepared for a difficult life, as were my parents and grandparents.

Albania was a very isolated country, politically, economically, and culturally. Our only connection to the world was through a radio program called Voice of America, and through the Italian television waves, which we caught illegally through primitive, improvised antennas. The only way to escape from reality was reading books. When I was twelve years old, I had already read all the books for children in the library. Confused, the librarian gave me some novels for adults and asked, “Are you sure you will not misunderstand them?” I smile when I remember that now. I think she hesitated because she was afraid love stories might influence me in a negative way. So my books were hidden everywhere—as “love letters,” as I call them in one of my poems. I had to hide those books from my mother; the last thing she wished for me was to be a daydreamer. And in such circumstances, she was right to worry.

Guernica: In one of your poems you write, “a childhood without promises / is bread without yeast / still sweet yet tough and dry.” How did you reconcile the idea of future with such a hopeless situation?

Luljeta Lleshanaku: Childhood is usually identified with fantasy, adventure, and dreaming. But mine didn’t offer a lot of hope. I could read my future in my palm. Everything foretold: “You have no future!” A person must be very strong to keep going without hope.

My early books, especially the Child of Nature, are my attempt to understand and explain the essence of morality in that kind of situation. My people were persecuted, hopeless, abandoned by the world and by God (“at the edge of sadness,” as they used to say), but they never gave up. They never betrayed themselves; they were a great moral model. Amid such challenges, you have to wonder: What gives meaning to human life?

Guernica: You’ve lived under two very different political regimes: communist Albania with its lack of freedom, scarcity, and lack of possibilities, and capitalist Albania, with so-called freedom, abundance, and opportunity. What has been your experience of those two regimes, and how did they impact your writing?

Luljeta Lleshanaku: Totalitarian regimes produce a culture and a moral code that is totally different from what happens in a democracy. There are two moral categories in a communist society: honest men and bad men. The “honest” ones resist compromising or collaborating with the regime, while the “bad” are the persecutors and collaborators. You can choose to be on one side or the other, but there is nothing in between. In a normal society, other factors can define who you are. You can be a good worker, sociable, tough, generous, tolerant, collaborative, friendly, and so on.

Jean-Paul Sartre said that France was freer than ever during the German occupation, when people had no choices but one: to collaborate or to resist. I’m not saying there was something good about that system. But the freest people I’ve ever met, or knew about, belonged to that period. For example, Musine Kokalari, an Albanian writer who dared to fight for political pluralism and free elections. She created the first social democratic party, despite knowing the high price she would have to pay. We usually understand freedom as meaning that there are many choices—but does having more choices, or believing we do, actually make us more free?

Guernica: Your writing grapples with ideas of femininity and masculinity, and you yourself often write from a perspective of a man. How do you think about that binary?

Luljeta Lleshanaku: Very often I hear talk about female literature, or femininity in literature. It’s a categorization I am not sure about. Maybe there are a few elements that distinguish women’s observations from men’s, like the ability to notice some fine details. But if you hide the author’s name, in most cases you would have difficulty identifying their gender. The same is true of the subjects of men and women’s writing: women’s literature is often considered sentimental. But if depth and brains are thought to be masculine characteristics, what we can say about women writers like Wisława Szymborska or Emily Dickinson?

Every time I find myself writing from the perspective of a man, a male character, I don’t have a clear explanation why. It might be because through a male voice I can satisfy my curiosity about what it would be like to be of the opposite gender. Or it might be even more subconscious than that—perhaps I feel less exposed under the “skin” of a man, less prejudged and more protected.