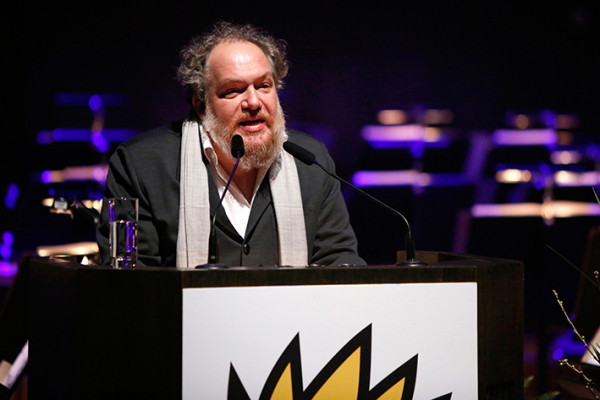 First of all, I would like to extend my thanks, my immense gratitude, to everyone. Contrary to what some people might at first think, an author does not write books. He writes texts, at best. Between the text I wrote and the book you have in your hands there are quite a few people: a French publisher, first of all, Actes Sud; then German translators, Sabine Müller and Holger Fock; then a German editor, Delf Schmidt, and a publishing house, Hanser Berlin, and its director, Karsten Kredel: a book is the work of a team, and that’s what differentiates it from a text. A book is an author, plus a publisher, plus editors — a chain of exchanges and shared contributions. Contributions that extend the text, and that clarify its meaning in a given context: heartfelt thanks to the Jury, which saw a European book in this Compass. Thank you, Dr. Dakhli, for the moving speech — my emotion upon hearing it is added to the emotion of finding myself on the Gewandhaus stage, which, for a writer, is rare enough to explain the tremor in my voice. Thank you.

It seems that political commentators lately have forgotten who Europe was. Europa. Forgotten the meaning of Europe. Europa was a Lebanese princess kidnapped on a beach near Saïda by a God from the North — Zeus — who desired her. The princess Europa, daughter of Agenor, never set foot on our lands; Europa spent her days in the Mediterranean, between Phoenicia and Crete. Europa is an illegal immigrant, a foreigner, the spoils of war. The story of Europa is a story of the Mediterranean, of desire and conquest. This metaphor and the story of Europa is rich in teachings for us. We bear her name. Europa is desirable. Europa is eastern. Europa is subjected to the domination of those from the North, who possess her by ruse. The colonizer Zeus appears masked, disguised as a bull, as power, as beauty. Sarpedon, Europa’s son, would go on to fight on the side of the Trojans, on the side of the Orient. His lifeless body would be carried off by Apollo, away from the battle, to be entrusted to the twins Hypnos and Thanatos, Sleep and Death. Unfortunately we too often forget these stories, we forget that the Mediterranean, the Eastern and Southern shores of the Mediterranean, saw the birth of the princess Europa. That the Mediterranean space, the cultural and linguistic space formed by its shores, has been an extremely vital and important part of our history, and that by shutting itself up in its Northern part, by forging an exclusive identity for itself as if it were draping itself in a cloak of pretension, Europe has condemned itself to a form of solitude. A fortress despite itself.

In Compass, I tried to shed a little more light on the Oriental side of the history of the European arts, literature and music mainly. For instance, in 1820, when Stendhal wrote his discourse On Love, he cites liberally not just The Thousand and One Nights but also Ibn Abi Hajala and his Diwan Al-Sababa, from which he excerpts a little story that, later on, Heinrich Heine would read in Stendhal’s piece and from which he would draw his poem “Der Asra” — a poem that would be, and this is still just one example, translated into Bosnian around 1900, set to music and sung in Sarajevo in a magnificent sevalinka, thus closing the circle of a long poetic transmission. Or, another example, Louis Aragon, the great French poet who carried the story forward of the Arabic poet gone mad from love, Qais ibn Al-Mulawah, who was called Majnun Layla, the one mad about Layla. Aragon pictures himself in Grenada desperately in love, burning with an absolute love, just like his model, to the point that he composed, in French, some magnificent Arabic verses. Cervantes himself, the great, unique Cervantes, inventor of the novel, claimed that the story of Don Quixote was actually the work of an Arab from La Mancha, Cide Hamete Benengeli, thereby in one stroke giving an Arabic ancestor to the entire European tradition of the novel. One could cite such examples ad infinitum, like so many little streams irrigating and spreading throughout all of Europe: the part of Princess Europa, the Sidon part — the other in the self.

Today some people seek exactly the opposite — to find or rediscover a mythical purity inside which they can shut themselves up, like an oyster. Today the ravages of war are destroying the princess Europa’s shores — Syria is in flames. We have abandoned Syria to destruction and suffering, just as we did before to Lebanon and Bosnia. Europeans are often sad spectators. But they cannot forget that this “Europe” whose name they have appropriated was in the beginning a construction of peace — as in the European Union — and that peace requires courage and conviction. Do we never learn anything from massacres? Ever? Do we draw no consequences from this destroyed country, from these hundreds of thousands dead, from these millions of refugees? Can we guarantee peace only to an area of land so small it includes neither the Ukraine, nor Turkey, nor the Sudan, nor Mali? Do we know how to achieve security only through domination and imperialism?

I wrote Compass under the sign of hope, relying on the axiom of hope. The principle of hope. What kind of hope can be contrasted with the somber hope of a man putting an end to his life and killing his fellow humans in exchange for the promise of paradise? What kind of hope can we place in the scale faced with the divine infinite? It would seem that democratic hope or economic aspiration no longer function for the world’s outsiders, the excluded ones, who look at globalization from below, the way you watch an airplane go by — for them the plane passes through the clouds of conspiracy. They see the planet as an immense plot from which they try vainly to extricate themselves, a generalized conspiracy of which they are the victims and from which only violent death can rescue them. And even beyond this self-destructive illusion, this blindness in the Self, this feeling of abandonment faced with the chaos of the world can be found everywhere, in Germany, France, Russia, Turkey. Everywhere, verbal violence against the Other and difference is becoming an illusory refuge against the movement of the world. A morbid refuge, a refuge that tends toward the violence of isolation. What can hope offer against this? What possible remedy, what suggestions? A hope that is perhaps modest, that of knowledge, of an erotics (like a poetics) of knowledge: the propagation of the desire for knowledge, the sharing of this desire. Curiosity as motivating force of the world, curiosity, knowledge, art, and literature as constituents of a shared world. Nothing is fixed in our identities, we are only ramblers on this planet. And if nothing is fixed, if everything is moving and undetermined, then we are constantly constructing ourselves; we are continually transformed by the other, by that other whom we in turn transform in a fertile aporia. Hominem unius libri timeo, I fear a man of one book, said Thomas Aquinas or Augustine of Hippo (who was, let’s not forget, Algerian); I fear a man of one book because he could be ignorant, the child of a single reading. I fear a man of one book because he might know that book so well he would be difficult to contradict… To that man of one book let us oppose the countless number of languages, the infinity of stories. To fixed identity let us oppose the energy of knowing. To the immobility of hatred let us oppose the infinite hope of the sun of knowledge.