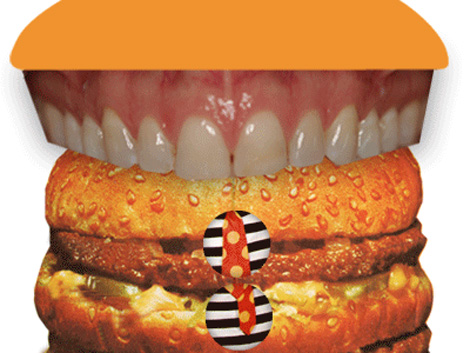 Next March, Joshua Cohen publishes a new novel, The Book of Numbers (Harvill Secker), in which the dying founder of the world’s leading tech company hires a failed novelist called Josh Cohen to ghostwrite his memoirs. Meantime, there is other Joshua Cohen fiction available online, not least ‘McDonald’s’: the story of ‘a frustrated pharmaceutical copywriter whose imaginative flights fail to bring solace because of a certain word he cannot put down on paper’. It’s part of Joshua Cohen’s 2012 collection Four New Messages, published by Graywolf Press, which almost certainly stylistically and thematically (the internet, technology, sex, failure, etc.) prefigures The Book of Numbers.

You can read the story over at Triple Canopy (the most avant-garde online publication around?), with interactive illustrations (if that is the right term) by Erin Schell:

I’D BEEN WRITING A STORY, yet another shitblast of the hundreds I’ve begun only to crumple for ply (I’d never been blocked before, some blockage should’ve been good for me but), came to that part in the story and just—I just had to stop, it was ridiculous!

What are you talking about? Dad asked and smiled retirement’s bridgework at being confronted by something as stunningly tedious as himself, probably—but himself fictionalized, as a fictional character—because I’m broke and so was wearing his clothing, also I have the beard he has because we both have weak chins. I’d come back to Jersey for the weekend to sleep without siren in my old ugly unrecognizable bedroom and fill up on homecooking.

We were in the bedroom.

He sat on a chair across from me on the bed and sipped from a wineglass and stared.

I said, You’re trying to get me to say it.

The walls were white scuffed with recent paint slashes: color swatches my parents were considering for the bedroom’s repainting, assorted pastels and other near neutrals very much not me. The bed and chair were not mine but new. My hutch desk was gone along with the shelving, the room was being converted into a guestroom but—as Mom had strained to say over the phone that early Friday—I would always be welcome.

How can you tell me what happened without telling me what Word? Dad asked suddenly standing older and grayer and rounded goutish and taking his glass from the sill and tipsy but maybe his feet were asleep walked out of the room.

After dinner Mom disappeared sinkward to rinse and call back a friend who’d called interrupting stroganoff, while Dad and I stayed seated as if extra table legs and he said, Let’s try this again, so I told him the story:

I said, There’s this girl, we’ll start with her, I guess I have to describe her. She’s pretty? Dad asked, I said, I describe her as tawny (I wasn’t quite sure what that meant), with red hair dyed and two huge mouthsized eyes. She’s sexy? Dad asked and shot a look at Mom who was busy making a dietetic dessert sandwich of ear and phone and shoulder. I said, She’s like the girl next door to the girl next door, meaning she’s somewhat trashy but also covered entirely with blood, in the first scene she’s just bloody head to toe. Of course she is, Dad said (distracting himself with the bottle, he poured the last petit noir), but you can call the different sections of a book, scenes? I thought that term was just for the movies? I said, You can say scene about a book but if you say chapter about a film people will think you’re an asshole. Of course they would, Dad said then took a sip winking and by the time he’d replaced empty glass to tabletop the sink had stopped, the kitchen was empty and Mom was already upstairs, her laughter floating distantly and then disappeared, aerated into a higher hilarity—into the refrigerator’s hum, the run of the dishwasher, the clock’s compulsive perk.

She’s in the backseat bouncing, I said, that’s the opening: her body bloodied with a knife sticking out of it in the backseat being bounced between her seatback and the backs of the seatbacks in front of her—Wait, Dad asked, what the hell? I said, If he’s not careful on the next large preggers bump her corpse could tumble to the floor, falling atop the filthy mats, atop the sloppy wads of mats, to wedge between her seat and his recline.

His? Dad asked, I said, If he doesn’t slow down.

Blood’s pooling in the seams of the seats, blood’s puddling and the radio’s off but he turns it down anyway, that’s a good detail that he can’t stand all that noise, he’s turning the volume down, down, lower down, all this one paragraph he’s just lowering the volume.

Why’s he doing that? Dad asked, I said, It’s a circular motion like how you’re supposed to stab someone then diddle the wrist, tweaking the knob of the liver, the spleen.

Neon sizzles past, neon sizzes, zisses? The windshield, in reflection, becomes signage. His throat burns, the boyfriend’s, “his hands are readied, tense.”