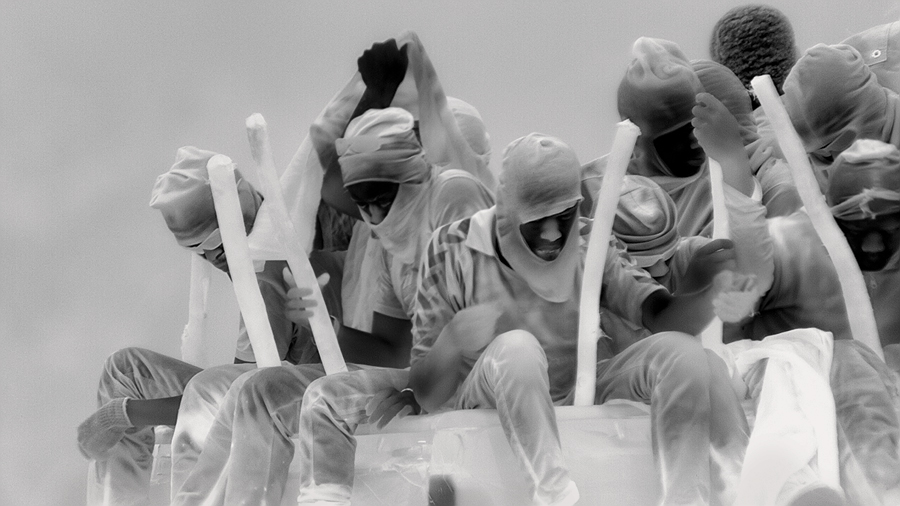 Writing for frieze, Christy Lange takes a look at Richard Mosse’s latest video installation that peers at the refugee crisis through an alien lens.

There are a few scenes in Richard Mosse’s new video installation, Incoming (2017), where you can see photo-journalists or news camerapeople chasing down the unfolding action or holding their lenses steady to catch the decisive moment. Mosse, on the other hand, spent two years filming the same events with a camera that was too large to hold, had no aperture to see through and was difficult to focus. Designed by a weapons manufacturer, the thermal camera Mosse used to document the migrant crisis for Incoming is built to capture heat signatures – in black, white and shades of grey. It weighs 23 kilogrammes, and is meant to be operated remotely by a laptop. As Mosse puts it: ‘The camera is designed to stand on a sentry pole in the middle of the desert,’ detecting a human body’s heat from up to 30 kilometres away for surveillance or targeting. Together with his cameraman, Trevor Tweeten, and the camera’s original designer, Mosse adapted an Xbox controller to operate it and an old Steadicam mechanism as support. As an apparatus designed for surveillance, the thermal camera represents part of the spectrum the human eye cannot see and, as such, is an apt metaphor for the vast and ungraspable refugee crisis – the lives that ‘register’ but are not ‘seen’.

The 52 minutes of footage that comprise Incoming, slowed down from the camera’s 60 frames per second to 24 frames per second, is by turns lyrical and vivid, harrowing and violent. The action unfolds across three large screens – from one screen at a time to two, then all three simul-taneously. Much like his previous endeavour, The Enclave (2013), which Mosse filmed in the eastern Congo with outdated infrared film, originally designed for military use, the photographic technology presents inherent challenges and unintentional aesthetic call backs. In The Enclave, the infrared film responded to chlorophyll in plants to make the jungle’s green foliage look bright pink. In Incoming, the thermal camera also works an extra-sensory tool to perceive thermal radiation, rendering it black on white or white on black. It allowed Mosse and his team to detect missiles landing in Aleppo from the other side of the Turkish border, ships sinking in the Aegean Sea miles offshore, and gunmen and refugees being smuggled at night. The otherworldly footage evokes the sense that we are watching the action covertly, as if through night-vision goggles; it’s a rare glimpse through the mechanized tools of surveillance used by states and militaries to view us. When we do see close-ups of faces, noses appear like indistinct white blobs and eyes are dark pits. Humans become fleshy targets susceptible to the camera’s weaponized gaze. It’s a representational device that draws powerful parallels between the act of documentation and surveillance.