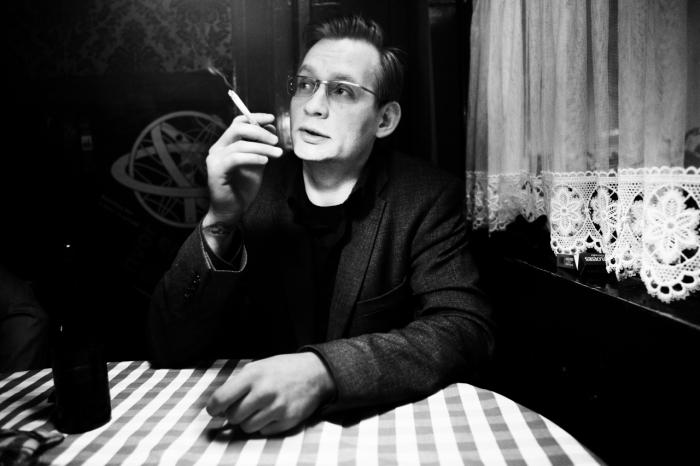 Selected by Petra Gropp for the Short Story Project, here is an excerpt from ‘Outside the Door’ by Clemens Meyer, translated by Katy Derbyshire. Incidentally, we will be publishing Katy’s translation of Clemens 2013 novel, Im Stein (Bricks and Mortar) later this year.

I go out in the yard with the dog. Just after two in the morning and the night’s very warm; the summer’s come back again this August after a long cool and rainy stretch. The hottest day of the year was this week. It wasn’t good for my dog, the heat. Wasn’t good for me either, that the nights didn’t cool off while I was writing. I always plan to write during the day but then I don’t start until everything’s quiet. I live on the ground floor, what we used to call the mezzanine, a word rarely used now. As a child, I didn’t know what it meant when I read it in books. I thought it was a secret. A strange in-between level inside houses.

My dog is having trouble getting down the half flight of stairs. Slowly, he puts one front paw on the first step, reaches the other very hesitantly too far down and can’t find the step to hold him; he often falls if I don’t watch out, and slips onto the tiles by the back door, sometimes turning over in mid-flight. The tiles are smooth and his back legs slide on them; he lands spread-eagled as though he wanted to do the splits. His body’s barely in one piece. I stand on the threshold and watch him struggle a couple of feet into the back yard and pee on the spot of ground where he always pees. The paving stones there are almost white by now. I carry him up the stairs; he’s lost a lot of weight these past weeks. His piss has a strong smell of sulphur, all the way into the hall. The door to my flat is closed. I can’t remember closing it. I search my pockets for my keys. Nothing. How am I going to get back in? My mother has a spare key; I could go over to the phone box and call her. But she’s in Africa, until the end of the month I think.

My flat has a double door; if I push the right-hand door with the handle and the lock on it as far inwards as it goes, I can put my hand through the gap to the two bolting mechanisms that keep the other door closed by means of two metal rods, the bottom one going down into the floor and the top one going up into a small opening in the door frame. If I manage to reach the lever that moves the rods, I can push both doors inwards and the lock will give way. It’s a complicated process, especially since I’ve inserted a cork into the top bolting mechanism to prevent the lever being released and the door being opened that way. It’s enough to release this upper rod from its anchoring in the wood of the frame, you see, and then the bottom rod pops out on its own if you throw your body hard enough against the two doors, best of all in the middle. It’s difficult to describe technical or mechanical processes exactly.