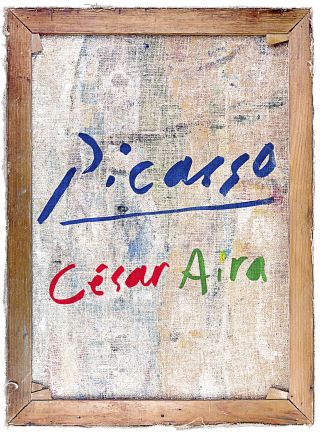 César Aira’s short story, ‘Picasso’ (trans. Chris Andrews), published in the New Yorker a few weeks back, is taken from The Musical Brain and Other Stories, a story collection forthcoming from New Directions in March 2015. New Directions publisher Barbara Epler’s short interview on discovering Aira‘s work is also worth a read for context.

(This is by the by but worth recounting: In 1997 César Aira wrote a novel, since published in English as The Literary Conference, in which a translator named César with aspirations to rule the world attends a literary conference so that he can be near the man whose clone he hopes will lead an army to victory: the world-renowned Mexican author, Carlos Fuentes. In response, Fuentes wrote Aira into his 2003 novel La Silla del Águila, predicting that he would become the first Argentine writer to win the Nobel Prize for Literature, in 2020. The odds on that are probably quite good.)

It all began when the genie came out of the Magic Milk bottle and asked me what I would prefer: to have a Picasso or to be Picasso. He could grant me either wish but, he warned me, only one of the two. I had to think about it for quite a while—or, rather, he obliged me to think about it. Folklore and literature are so full of stories about greedy fools who are punished for their haste it makes you think those offers are all too good to be true. There are no records or reliable precedents on which to base a decision, because this sort of thing happens only in stories or jokes, so no one has ever really thought about it seriously; and in the stories there’s always a trick, otherwise it would be no fun and there would be no story. At some point, we’ve all secretly imagined this happening. I had it all worked out, but only for the classic “three wishes” scenario. The choice the genie had given me was so unexpected, and one of the options was so definitive, that I needed some time to weigh them up.

It was a strange choice but not inappropriate; in fact, it was particularly apt. I was leaving the Picasso Museum, in a state of rapture and boundless admiration, and at that moment I could not have been offered anything, or any two things, that would have tempted me more. I hadn’t actually left the museum yet. I was in the garden, sitting at one of the outdoor tables, having gone to the café and bought a little bottle of the Magic Milk that I’d seen tourists drinking everywhere. It was (it is) a perfect autumn afternoon: gentle light, mild air, and still a while to go before dusk. I took my notebook and pen from my pocket to make some notes, but in the end I didn’t write anything.