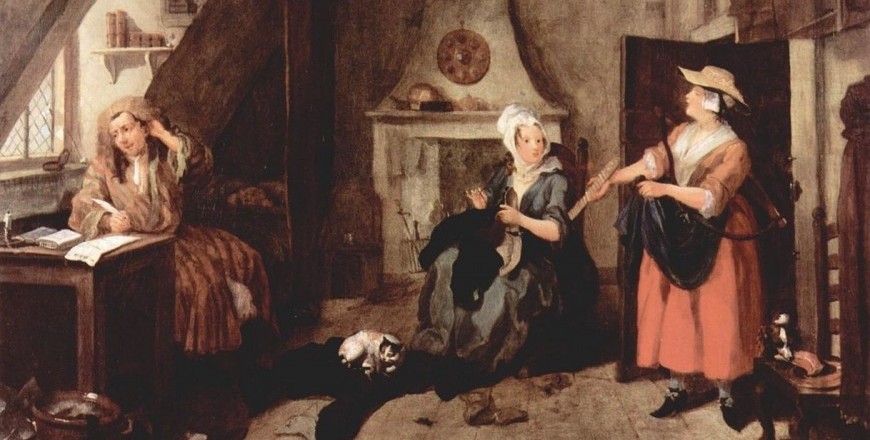 If poetry’s status as work is worth asserting, it needs to go beyond semantics and subjective difficulty into more practical considerations of how the making of poems is valued (in various senses) alongside other kinds of labour. To this end, Paterson nudges the question of whether poetry is work towards a more interesting one about what kind of work it might be. In more and less subtle ways, Jarmusch gives us a chance to weigh poem-making against, on one hand, more material types of ‘creative’ work, and on the other, the waged work of Paterson’s bus driving job. The structure and editing foreground a sustained comparison of the former. While Paterson writes ‘at work’, his wife Laura makes things at home: sewing or painting curtains, making or refashioning clothes, redecorating their house, learning to play the guitar, or baking cupcakes for the local farmers market. Immediately, we’re confronted with the historically lopsided status and often strongly gendered division of work that takes place in the public or private sphere.

For the philosopher Hannah Arendt, this apparently ancient division of public and private is partly linked to the raising of intellectual labour over manual labour (or what we now call white- and blue-collar work) in classical Greek society. In The Human Condition (1958), Arendt singles out ‘poetry, whose material is language’ as ‘perhaps the most human and least worldly of the arts, the one in which the end product remains closest to the thought that inspired it’ – in other words, as almost purely intellectual labour. Leaving effort aside, this gives us the option of evaluating the work of poetry in terms of its material (or immaterial) nature. In The Craftsman (2009), however, the American philosopher Richard Sennett diverges from his Arendt (his former teacher), in his insistence on the merging of mental and manual labour in the work he venerates as ‘craft’. ‘Every good craftsman conducts a dialogue between concrete practices and thinking,’ Sennett insists. In this way, craft and its products represent ‘the intimate connection between the hand and head.’

But Sennett himself also acknowledges the unequal status of different crafts, linking to Arendt’s distinction between public and private realms in his defence for the male focus of The Craftsman. ‘Most domestic crafts and craftsmen seem different in characterthan labor now outside the home,’ he writes (with my emphasis). ‘We do not think of parenting, for instance, as a craft in the same sense that we think of plumbing or programming, even though becoming a good parent requires a high degree of learned skill.’ In Sennett’s historical account, this is simply the way it is. The preface of Matthew Crawford’s Shop Class as Soulcraft – also published in 2009, and in the UK as The Case for Working with Your Hands – apologises likewise that ‘it so happens that most of the characters who appear in this book are men.’

When Paterson premiered at the Cannes festival last year, Jarmusch recalls some ‘feminist French journalist’ accusing him of making ‘a throwback to ‘50s domesticity, et cetera, with this character of Laura.’ He finds this ‘a little shallow,’ however, and is ready with a long reply, which ends with him exclaiming ‘I’m a feminist!’ (Elsewhere, he tempers it to ‘I consider myself a feminist, in a way.’) To the French journalist and others questioning the film’s undeniably regressive gender roles, he explains: ‘Laura lives how she wants; she does what she wants. She’s entrepreneurial, even if it’s in a domestic set-up like selling cupcakes. She wants to maybe be musical – she’s very artistic in décor – so to say that she is not liberated, if one were to say that, then I wonder how these people think of all the working-class women in the world that are washing their families’ clothes or making food.’ When Jarmusch tells a female interviewer that ‘domesticity is a fact of how social structure works,’ he isn’t far from Sennett’s matter-of-factness regarding the difference in character of that work. Yet, his defence of Laura’s ‘entrepreneurial’ set-up also points to an essential difference between the two main characters’ approach to their respective crafts.