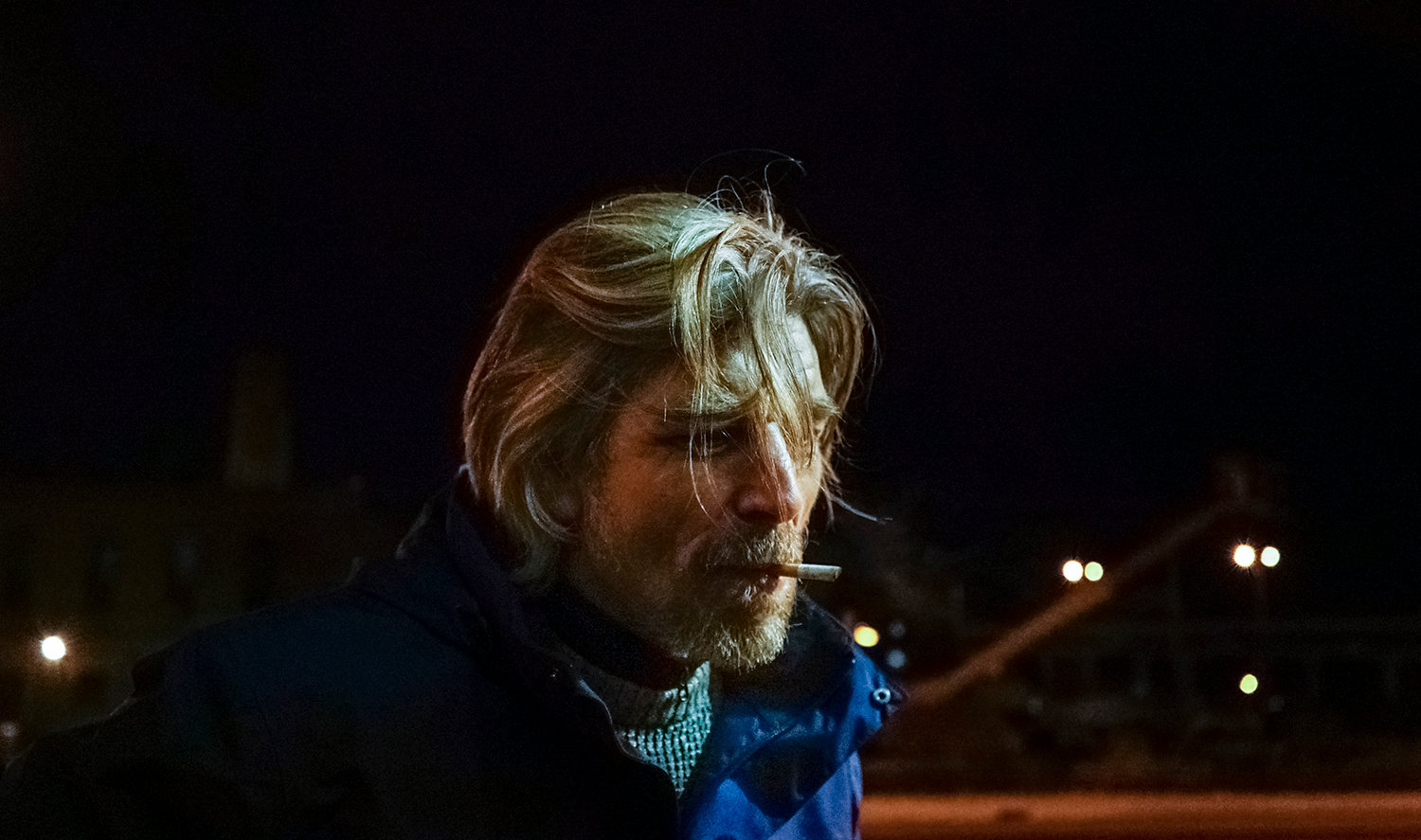 It turns out Karl Ove Knausgaard’s not really a people person. Anyhow, if you haven’t enough KOK, this (in the NYT) is worth a read:

At noon the next day I looked out the window of my plane from Toronto, staring down at the outskirts of Cleveland, an endless row of streets with identical houses, beneath the dirty gray light of a misty, freezing sky.

At last I was in the United States. And in my backpack were the documents proving I had a driver’s license, stamped by the Swedish Embassy in Washington. I had agreed to meet the photographer at the airport and travel with him for a day, but then I would attempt to rent a car and continue on my own.

I didn’t really enjoy talking to people that much, at least not to strangers, and the thought of spending the next five days in a car with someone I didn’t know was a bit unsettling. In this case, I also had a hunch that the photographer was in many respects my total opposite. We had exchanged some text messages about where to go and what to see. The first thing he had written to me, was this:

Hey man, it’s Peter the NYT photographer. Texting you so you have my number. Inshallah this message comes through. Safe travels.

Detroit is fascinating. I know this wild and lovely family living there. 14 people living in a house. Smoking a lot of dope. In Wisconsin I know a vet who is a character. Anyhow regardless it’s pretty easy to get into weird and fascinating situations in this country. . . .

What I wanted to see were the woods, the meadows and small towns of Maine and Vermont, and the last thing I wanted was to end up in what he called “weird and fascinating situations.” I had a deep-seated fear of drugs, in any form, they represented a kind of transgression that I found deeply disturbing. Just seeing the word “heroin” shook me to the core, there was something diabolical about it. Being so close to chaos all the time, I feared nothing more than the things that could unleash it, and I knew I would love heroin, as I loved everything that took me away from the present moment. I have based my life upon saying no to all kind of temptations, like taking time off, going on holiday, having a drink in the afternoon, staying up late at night. Was I going to sit in a derelict house with a family of 14 who all smoked marijuana? And what would I say to the poor veteran? How was it in the war? What are you doing now?

Inside the terminal, I stopped at a bookstore to look at travel guides. I still hadn’t decided where to go, the only sure thing was that I would end up in Alexandria on Monday, and a travel guide could suggest routes to follow and provide information about the places we drove through. One of my favorite books about the U.S. is Vladimir Nabokov’s “Lolita,” which among many other things is also a kind of road novel. It describes a journey through the small-town world of post-World War II America, where the protagonist, Humbert Humbert, is constantly on the lookout for distractions for his child mistress, and therefore stops at an endless series of attractions, which every single little town seemed to be in possession of. The world’s largest stalagmite, obelisks commemorating battles, a reconstruction of the log cabin where Lincoln was born, the world’s longest cave, the homemade sculptures of a local woman. Humbert’s gaze is European, deeply sophisticated, cultivated and ancient, but also perverted and sick, while the things he observes on the journey across America are superficial, childishly un-self-conscious, ignorant of history, but also innocent and possessed of the freshness of the new.

“Lolita” came out in the U.S. in 1958, one year after another road novel, Jack Kerouac’s “On the Road.” Oddly enough, the journeys that these two books describe also begin at the same time: Both Humbert and Lolita, and Sal and Dean, hit the American country road in 1947. It would be hard to imagine two more dissimilar fictional landscapes. This is because Kerouac describes it from the inside, with no distance, this is the America he grew up in, and he is so much an integrated part of it that he seems to embody its very soul. It is a young, restless, hungry, open soul. There are no points of contact with that America in Nabokov’s novel, and if you read the two books simultaneously, the reason becomes obvious: In “Lolita,” all is dissembling, there are only signs, everything stands for something else, and the one and perhaps only thing that is authentic, the child’s reality, is desired from an impossible distance, the breaching of which destroys it completely. In “On the Road,” nothing stands in the way of the authentic, except the rules of formal life; when they have been overcome, the glittering night opens to anyone who desires to enter it. The naïveté of this is astounding, but so is the power.

Now, both Nabokov’s book and Kerouac’s were nearly 60 years old, and themselves a part of this country’s history. But the conflict between life and the imitation of life, and the impossible desire for authenticity, was still being explored in American literature, where entire human destinies could be played out in the interiors of historical theme parks and which, time and time again, allowed the perverted psychological language of sincerity and caring to collide with the evasive and unacknowledged emotions of lived life, often in comical ways, sometimes in ways that seemed desperate and claustrophobic.

I couldn’t find any travel guides, and I bought a notebook and a pen instead, paid, and put them in my backpack. Then I walked out into the wide corridor again and headed for the baggage claim.

“Karl Ove?” said a voice behind me.

I turned around. A young man of around 30, dressed in a dark, slightly shabby coat, with curly hair and glasses, stood there looking at me.

“Peter, the photographer,” he said and put out his hand. “I thought you might be somewhere around here.”