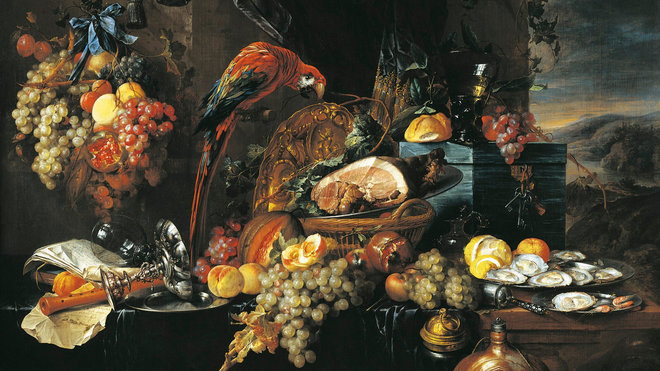 Writing for the Paris Review, Edward White remembers the extravagant culinary art of Bartolomeo Scappi, the most innovative chef of the Italian Renaissance:

Scappi was born to modest circumstances around the turn of the sixteenth century, probably in Dumenza, a tiny town about forty miles north of Milan. At the time, medieval tastes still dominated elite dinner tables. In the Ancient world, the cuisine of the Mediterranean, based on bread, oil, and wine, was held up as a marker of its innate superiority over the Germanic peoples, with their supposedly barbaric fare of meat, milk, and beer. After the fall of Rome, the two traditions slowly merged until, in the late Middle Ages, the food served on the tables of the mighty across Europe was broadly similar: heavily spiced sweet-and-sour combinations, given layers of earthy complexity with great heaps of garden herbs. Many of the dishes Scappi chose to record in his magnum opus retain that sensibility, such as his recipe for an omelette made with pig’s blood goat cheese, spring onion, cinnamon, clover, nutmeg, marjoram, and mint—the kind of concoction that would nowadays be considered inedible just about anywhere on earth. Yet, among these forbidding relics of the medieval world, the Opera abounds with innovation that put cooking—perhaps for the first time—on a plinth next to the other creative arts.

We know nothing of Scappi’s childhood, or his private life; there are few facts about him of which we can be certain beyond that he was obsessed with food, and ordered his adult existence around it. By his midthirties, he was running the kitchen of Cardinal Campeggio of Bologna, preparing meals for him and his guests, including, on one occasion, the Holy Roman Emperor. It was here that his reputation as a great pioneer began to take shape.

Stimulated by discovery and innovation, the young cook developed a culinary identity that embraced the whole of the Italian Peninsula at a time when the notion of an Italian cuisine was as distant as the notion of an Italian nation. The Opera overflows with references to a Bolognese sauce for this, a Genoese garnish for that, or a delicious dessert known and loved by the people of Padua but virtually secret from anyone else. It suggests he traveled a lot with the express intention of trawling markets, speaking to traders, and experimenting with every new ingredient that came his way. Though he hardly ever refers to something as “Italian,” in a rudimentary way Scappi’s recipes inadvertently assemble the nation that had yet to be made, sitting side by side dishes from the Veneto to the Kingdom of Naples in a single, sumptuous meal. This roving palate also encompassed the New World, the flavors of which are on every page of the Opera—especially sugar, which features in something like 90 percent of its recipes, including as a pizza topping, along with pine nuts and rosewater.