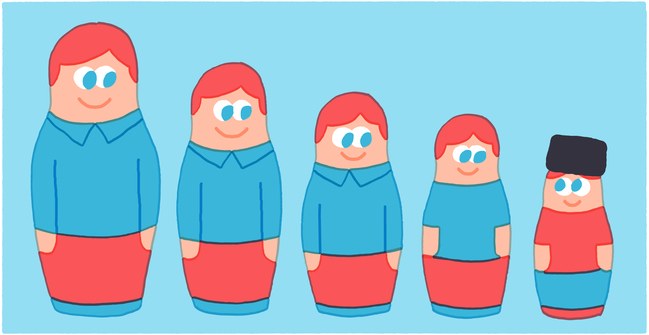 In the New Yorker, A Terrible Country author Keith Gessen writes on bilingualism and his decision to teach his son Russian:

I no longer remember when I started speaking to Raffi in Russian. I didn’t speak to him in Russian when he was in his mother’s womb, though I’ve since learned that this is when babies first start recognizing sound patterns. And I didn’t speak to him in Russian in the first few weeks of his life; it felt ridiculous to do so. All he could do was sleep and scream and breast-feed, and really the person I was talking to when I talked to him was his mother, Emily, who was sleep-deprived and on edge and needed company. She does not know Russian.

But then, at some point, when things stabilized a little, I started. I liked the feeling, when I carried him through the neighborhood or pushed him in his stroller, of having our own private language. And I liked the number of endearments that Russian gave me access to. Mushkin, mazkin, glazkin, moy horoshy, moy lyubimy, moy malen’ky mal’chik. It is a language surprisingly rich in endearments, given its history.

When we started reading books to Raffi, I included some Russian ones. A friend had handed down a beautiful book of Daniil Kharms poems for children; they were not nonsense verse, but they were pretty close, and Raffi enjoyed them. One was a song about a man who went into the forest with a club and a bag, and never returned. Kharms himself was arrested in Leningrad, in 1941, for expressing “seditious” sentiments, and died, of starvation, in a psychiatric hospital the following year; the great Soviet bard Alexander Galich would eventually call the song about the man in the forest “prophetic” and write his own song, embedding the forest lyrics into a story of the Gulag. Raffi really liked the Kharms song; when he got a little older, he would request it and then dance.

Before I knew it, I was speaking to Raffi in Russian all the time, even in front of his mother. And while at first it seemed silly, because he didn’t understand anything we said, in any language, there came a point when I saw that he did. We started with animal sounds. “What does a cow”—korova—“say?” I would ask. “Moo!” Raffi would answer. “What does a cat”—koshka—“say?” “Meow.” “And what does an owl”—sova—“say?” Raffi would make his eyes big and raise his arms and pronounce, “Hoo, hoo.” He didn’t understand much else, though, at a certain point, around the age of one and a half, he seemed to learn that nyet meant “no”—I said it a lot. He didn’t understand me as well as he understood his mother, and he didn’t understand either of us all that much, but still it felt like a minor miracle. I had given my son some Russian! After that, I felt I should extend the experiment. It helped that people were so supportive and impressed. “It’s wonderful that you’re teaching him Russian,” they said.

But I had doubts, and still do.

Bilingualism used to have an undeservedly bad reputation; then it got an undeservedly exalted one. The first came from early twentieth-century American psychologists, who, countering nativists, proposed that something other than heredity was causing Eastern and Southern European immigrants to score lower than Northern Europeans on newly invented I.Q. tests. They proposed that the attempt to learn two languages might be at fault. As Kenji Hakuta points out, in his 1986 book, “The Mirror of Language,” neither the psychologists nor the nativists considered that I.Q. tests might themselves be useless.

In the early nineteen-sixties, this pseudo-science was debunked by Canadian researchers in the midst of debates over Quebecois nationalism. A study by two McGill University researchers, which used French-English bilingual schoolchildren in Montreal, found that they actually outperformed monolingual children on tests that required mental manipulation and reorganization of visual patterns. Thus was born the “bilingual advantage.” It remains the conventional wisdom, as I have recently learned from people telling me about it over and over.