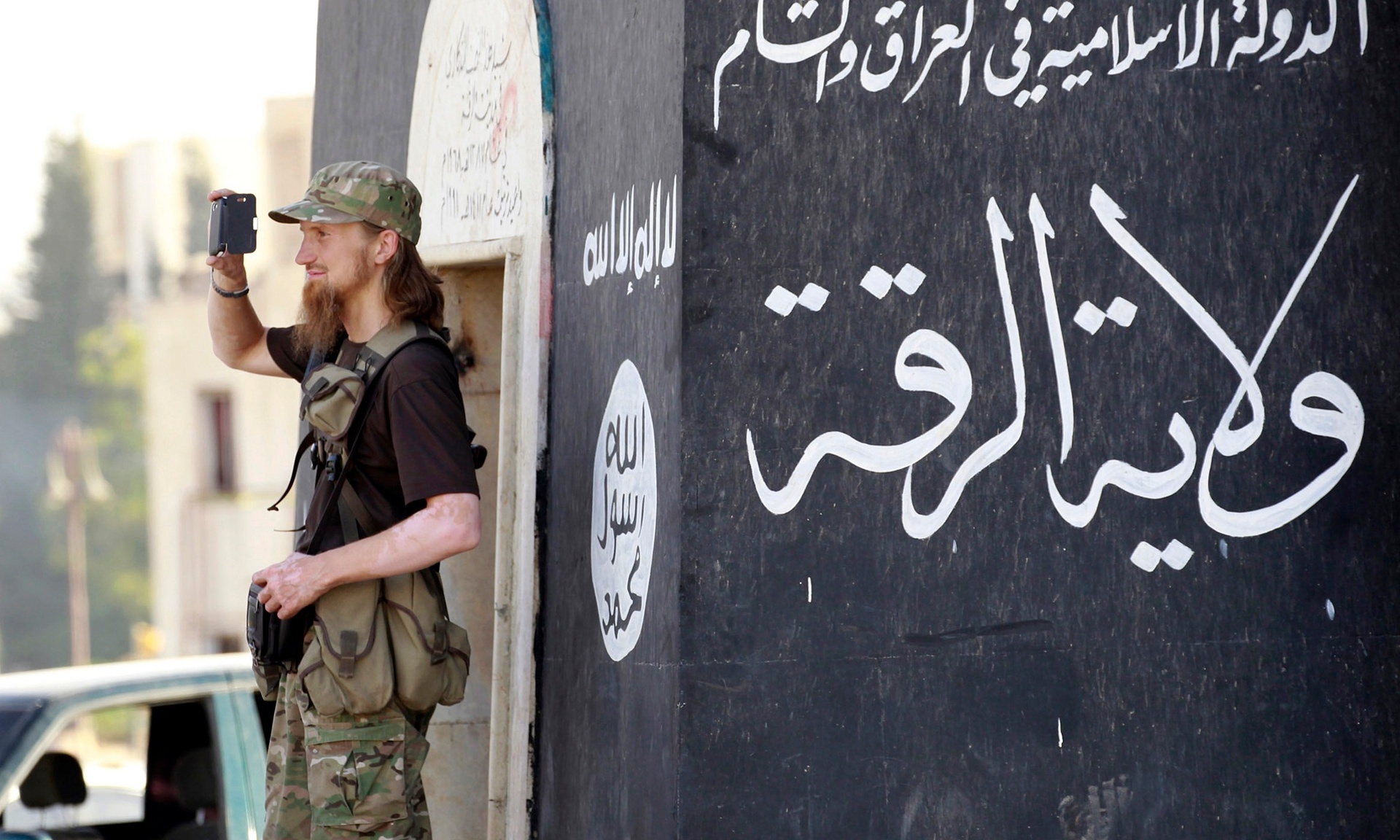 An article to assimilate the rise and rise of IS: ‘Islamic State is often called “medieval” but is in fact very modern – a horrific expression of a widespread frustration with a globalised western model that promises freedom and prosperity to all, but fails to deliver.’

Violence has erupted across a broad swath of territory in recent months: wars in Ukraine and the Middle East, suicide bombings in Xinjiang, Nigeria and Turkey, insurgencies from Yemen to Thailand, massacres in Paris, Tunisia and the American south. Future historians may well see such uncoordinated mayhem as commencing the third – and the longest and the strangest – of world wars. Certainly, forces larger and more complex than in the previous two wars are at work; they outrun our capacity to apprehend them, let alone adjust their direction to our benefit.

The early post cold war consensus – that bourgeois democracy has solved the riddle of history, and a global capitalist economy will usher in worldwide prosperity and peace – lies in tatters. But no plausible alternatives of political and economic organisation are in sight. A world organised for the play of individual self-interest looks more and more prone to manic tribalism.

In the lengthening spiral of mutinies from Charleston to central India, the insurgents of Iraq and Syria have monopolised our attention by their swift military victories; their exhibitionistic brutality, especially towards women and minorities; and, most significantly, their brisk seduction of young people from the cities of Europe and the US. Globalisation has everywhere rapidly weakened older forms of authority, in Europe’s social democracies as well as Arab despotisms, and thrown up an array of unpredictable new international actors, from Chinese irredentists and cyberhackers to Syriza and Boko Haram. But the sudden appearance of Islamic State (Isis) in Mosul last year, and the continuing failure to stem its expansion or check its appeal, is the clearest sign of a general perplexity, especially among political elites, who do not seem to know what they are doing and what they are bringing about.

In its capacity to invade and hold a territory the size of England, to inspire me-too zealotry in Pakistan, Gaza, Afghanistan, Nigeria, Libya and Egypt, and to entice thousands of camp followers, Isis represents a quantum leap over all other private and state-sanctioned cults of violence and authoritarianism today. But we are not faring well with the cognitive challenge to define this phenomenon.

For Obama, it is a “terrorist organisation, pure and simple”, which “we will degrade and ultimately destroy”. British politicians, yet again hoping against experience to impress the natives with a show of force, want to bomb the Levant as well as Mesopotamia. A sensationalist and scruple-free press seems eager to collude in their “noble lie”: that a Middle Eastern militia, thriving on the utter ineptitude of its local adversaries, poses an “existential risk” to an island fortress that saw off Napoleon and Hitler. The experts on Islam who opened for business on 9/11 peddle their wares more feverishly, helped by clash-of-civilisation theorists and other intellectual robots of the cold war, which were programmed to think in binaries (us versus them, free versus unfree world, Islam versus the west) and to limit their lexicon to words such as “ideology”, “threat” and “generational struggle”. The rash of pseudo-explanations – Islamism, Islamic extremism, Islamic fundamentalism, Islamic theology, Islamic irrationalism – makes Islam seem more than ever a concept in search of some content while normalising hatred and prejudice against more than 1.5 billion people. The abysmal intellectual deficit is summed up, on one hand, by the unremorsefully bellicose figure of Blair, and, on the other, the British government squabbling with the BBC over what to call Isis.

In the broadest view, Isis seems the product of a catastrophic war – the Anglo-American assault on Iraq. There is no doubt that the ground for it was prepared by this systematic devastation – the murder and displacement of millions, which came after more than a decade of brutalisation by sanctions and embargoes. The dismantling of the Iraqi army, de-Ba’athification and the Anglo-American imprimatur to Shia supremacism provoked the formation in Mesopotamia of al-Qaida, Isis’s precursor. Many local factors converged to make Isis’s emergence possible last year: vengeful Sunnis; reorganised Ba’athists in Iraq; the co-dependence of the west on despotic allies (al-Sisi, al-Maliki) and incoherence over Syria; the cynical manoeuvres of Assad; Turkey’s hubristic neo-Ottomanism, which seems exceeded in its recklessness only by the actions of Saudi Arabia and the Gulf States.

The failure of the Arab Spring has also played a part. Tunisia, its originator, has sent the largest contingent of foreign jihadis to Iraq and Syria. Altogether an estimated 17,000 people, mostly young men, from 90 countries have travelled to Syria and Iraq to offer their services to Isis. Dozens of British women have gone, despite the fact that men of Isis have enslaved and raped girls as young as 10 years old, and stipulated that Muslim girls marry between the ages of nine and 17, and live in total seclusion. “You can easily earn yourself a higher station with God almighty,” a Canadian insurrectionist, Andre Poulin, exhorted in a video used by Isis for online recruitment, “by sacrificing just a small bit of this worldly life.”

It is not hard to see that populous countries such as Pakistan and Indonesia will always have a significant number of takers for well-paid martyrdom. What explains, however, the allure of a caliphate among thousands of residents of relatively prosperous and stable countries, such as the high-achieving London schoolgirls who travelled to Syria this spring?

Isis, the military phenomenon, could conceivably be degraded and destroyed. Or, it could rise further, fall abruptly and then rise again (like al-Qaida, which has been degraded and destroyed several times in recent years). The state can use its immense power to impound passports, shut down websites, and even enforce indoctrination in “British values” in schools. But this is no way to stem what seems a worldwide outbreak of intellectual and moral secessionism.

Isis is only one of its many beneficiaries; demagogues of all kinds have tapped the simmering reservoirs of cynicism and discontent. At the very least, their growing success and influence ought to make us re-examine our basic assumptions of order and continuity since the political and scientific revolutions of the 19th century – our belief that the human goods achieved so far by a fortunate minority can be realised by the ever-growing majority that desires them. We must ask if the millions of young people awakening around the world to their inheritance can realise the modern promise of freedom and prosperity. Or, are they doomed to lurch, like many others in the past, between a sense of inadequacy and fantasies of revenge?

Returning to Russia from Europe in 1862, Dostoevsky first began to explore at length the very modern torment of ressentiment that the misogynists of Twitter today manifest as much as the dupes of Isis. Russian writers from Pushkin onwards had already probed the peculiar psychology of the “superfluous” man in a semi-westernised society: educated into a sense of hope and entitlement, but rendered adrift by his limited circumstances, and exposed to feelings of weakness, inferiority and envy. Russia, trying to catch up with the west, produced many such spiritually unmoored young men who had a quasi-Byronic conception of freedom, further inflated by German idealism, but the most unpromising conditions in which to realise them.

Rudin in Turgenev’s eponymous novel desperately wants to surrender himself “completely, greedily, utterly” to something; he ends up dead on a Parisian barricade in 1848, having sacrificed himself to a cause he doesn’t fully believe in. It was, however, Dostoevsky who saw most acutely how individuals, trained to believe in a lofty notion of personal freedom and sovereignty, and then confronted with a reality that cruelly cancelled it, could break out of paralysing ambivalence into gratuitous murder and paranoid insurgency.

His insight into this fateful gap between the theory and practice of liberal individualism developed during his travels in western Europe – the original site of the greatest social, political and economic transformations in human history, and the exemplar with its ideal of individual freedom for all of humanity. By the mid-19th century, Britain was the paradigmatic modern state and society, with its sights firmly set on industrial prosperity and commercial expansion. Visiting London in 1862, Dostoevsky quickly realised the world-historical import of what he was witnessing. “You become aware of a colossal idea,” he wrote after visiting the International Exhibition, showcase of an all-conquering material culture: “You sense that it would require great and everlasting spiritual denial and fortitude in order not to submit, not to capitulate before the impression, not to bow to what is, and not to deify Baal, that is, not to accept the material world as your ideal.”

However, as Dostoevsky saw it, the cost of such splendour and magnificence was a society dominated by the war of all against all, in which most people were condemned to be losers. In Paris, he caustically noted that liberté existed only for the millionaire. The notion of equality before the law was a “personal insult” to the poor exposed to French justice. As for fraternité, it was another hoax in a society driven by the “individualist, isolationist instinct” and the lust for private property.

Dostoevsky diagnosed the new project of human emancipation through the bewilderment and bitterness of people coming late to the modern world, and hoping to use its evidently successful ideas and methods to their advantage. For these naive latecomers, the gap between the noble ends of individual liberation and the poverty of available means in their barbarous social order was the greatest. The self-loathing clerk in Notes from Underground represents the human being who is excruciatingly aware that free moral choice is impossible in a world increasingly regimented by instrumental reason. He dreams constantly and impotently of revenge against his social superiors. Raskolnikov, the deracinated former law student in Crime and Punishment, is the psychopath of instrumental rationality, who can work up evidently logical reasons to do anything he desires. After murdering an old woman, he derives philosophical validation from the most celebrated nationalist and imperialist of his time, Napoleon: a “true master, to whom everything is permitted”.