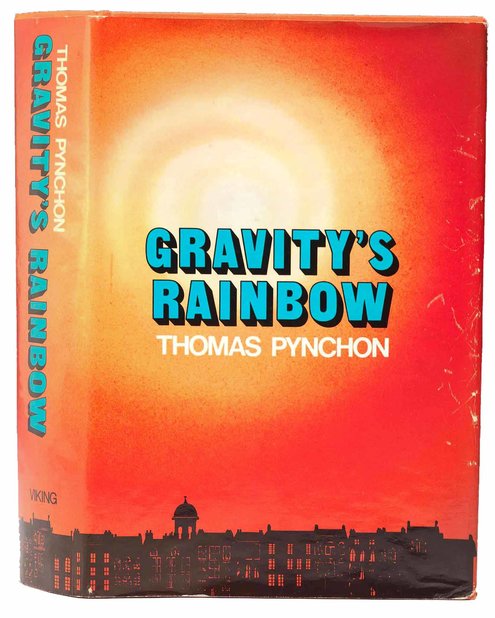 “Gravity’s Rainbow,” Thomas Pynchon’s gargantuan parable of rocketry, sex and a whole bunch of other stuff, turned 41 this year — six years older than its author when it was first published. What happens when a novel whose scenes of coprophagia and pedophilia moved Pulitzer trustees to cancel the prize in 1974 (when Pynchon seemed poised to win) eases into middle-aged, canonical respectability? Well, for one thing, it gets an audiobook release. Since the mid-1980s, a George Guidall recording has been floating around, like some mythical lost rocket part — no one had heard it, but all Pynchon fans knew someone who knew someone who had — but in October a new version, authorized and rerecorded and burned onto 30 compact discs — hit the stands. How on earth, I wondered as I stripped the wrapper, is poor Mr. Guidall going to render the sudden outbreaks of crazed capitals, or librettos in which stoners with guitars pastiche Rossini, the instructions helpfully stating “(bubububoo[oo] oo [sung to opening of Beethoven 5th, with full band])”? He turns out to do it in a slow and deep-voiced manner, beneath whose calm avuncularity you can detect anxiety, even mania, bubbling but never quite erupting — although I could have sworn I heard him, in the silence at the end of CD 30, racing out the door to buy a year’s supply of those Thayer’s Slippery Elm Throat Lozenges the hero Slothrop sucks, or perhaps to check himself into the book’s White Visitation mental hospital.

The main benefit of Guidall’s superhuman effort may well be ergonomic. Unlike Grigori, the novel’s reflex-­conditioned octopus, a human reader has only two hands; removing the book as a physical object frees up one of these to palm through Steven Weisenburger’s “A ‘Gravity’s Rainbow’ Companion” and the other to click around the many online glossaries to the text while listening. Such resources seem to me more than optional; only “Finnegans Wake” is more opaque, more reference-­saturated than Pynchon’s novel. And perhaps the benefits of audio end here. An old canard, reeled off incessantly by people who haven’t read “Finnegans Wake,” or at least haven’t understood it, holds that “you need to hear it spoken aloud in order to appreciate it.” This is nonsense: Joyce’s novel, wrapped around in silence, is all about legibility — inscriptions, codices, scattered scraps of paper in need of reassembly, exegesis or decoding. So it is with “Gravity’s Rainbow”: The book’s logic is entirely scriptural. Every surface in it is a parchment to be interpreted: ice-cracks form “graffiti . . . a legend to be deciphered”; raindrops splash in asterisks, inviting us “to look down at the bottom of the text of the day”; lit cigarettes trail “cursive writing”; even feces on the walls of sewers presents “patterns thick with meaning.” Its people, lying in rows in a hospital ward described as a “half-open file drawer of pain each bed a folder,” are legible as well, “poor human palimpsests” that doctors transcribe and — more sinisterly — rewrite. Slothrop’s ancestors, as Puritans, scanned the sky for messages, viewed all of nature as a ledger packed with data “behind which always, nearer or farther, was the numinous certainty of God.” In keeping with their sensibility, the narrative momentum thrusts both forward, toward inevitable (because predestined) final catastrophe and judgment and, simultaneously, backward, through histories encrypted into junkyards, light bulbs, even human hair, reverse-engineering cities into ruins, rooms to their “plan views” in order to lay bare the plans hatched in them, plans in whose web all current actors find themselves entangled. One character is tellingly urged, in a direct address by the narrator, to ponder a “wind tunnel” theory of history, through which tensor analysis might reveal “nodes, critical points,” turbulence-spots decisive in the shaping of all subsequent airflow, only now become apparent — then told, “Here’s a thought: Find a non-­dimensional coefficient for yourself.”