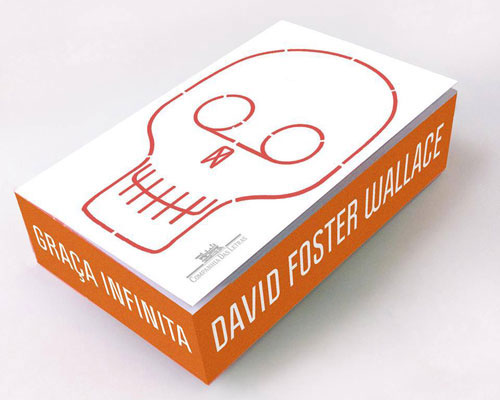 Infinite Jest is a notoriously difficult novel to translate. The German translator, Ulrich Blumenbach, spent six years on his version. There is still no French edition, but one is on the way. Now we have the Brazilian edition. Caetano W. Galindo offers interesting insights into the difficulty of translating such an inventive novel:

CWG: It was a fascinating process. And in this book in particular, the sensation of being “inside” someone’s head (pun intended) is really overwhelming. I love the book even more today, after having unraveled and re-raveled its inner workings. I could feel the plot: I could almost touch it. But you have to remember I was not working on a regular daily schedule. When I could, I clocked 10 hours. But then, the next day, I wouldn’t have time to translate at all, since I would have papers to grade, or other things to write, or students needing help, classes to teach. I think that helped keep me safe. Wallace’s (or Incandenza’s) mind seems to be exactly what the book is: a beautiful labyrinth. Enchanting. But dangerous…

GS: What do you make of IJ’s notoriously indeterminate plot? Did your interpretations or understandings affect your translation?

CWG: As for the plot: well, I’m a translator. The guy designs a labyrinth. I reproduce the design with my own bricks and mortar. It’s not my job to point any ways out, if there are any! As a reader, I do have my interpretation, but that’s not what matters. As I tell students all the time, the translator’s job is not to find an interpretation, but to try and find all interpretations, and keep these possibilities open for this new reader who’s going to have only the translation as a guide. But, back to plot, you basically follow the original steps. No biggie. There’s one thing I regret, though. A student of mine, Ana Carolina Werner, pointed it out to me. The final two words of the book, referring to the tide being “way out,” also suggest the possibility of exit, escape. But there was no way to keep this double entendre in the Portuguese.