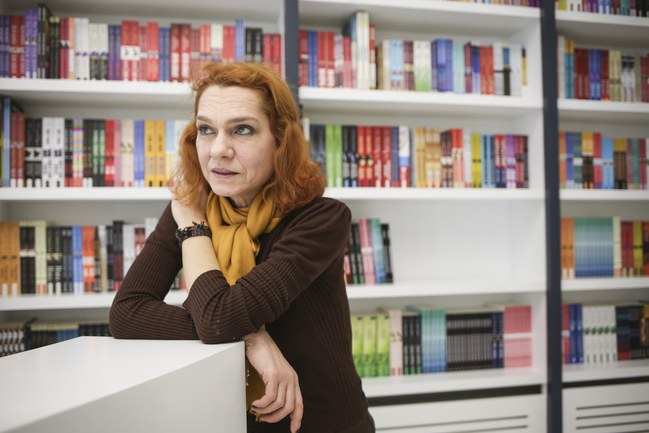 Aysegul Sert writing about the current state of author prosecution in Turkey for the New Yorker:

On a sweltering afternoon in Istanbul last summer, loud noises woke the Turkish novelist Aslı Erdoğan from a nap. “Open, police! Open, or we will break the door,” a voice called. When Erdoğan, an award-winning writer, unlocked her door, the cold muzzle of an automatic rifle was placed against her chest. Soldiers in black masks and bulletproof vests barged in, shouting “Clean!” as they moved through each room. Erdogan, who is fifty years old, was alone in her apartment. The men, Turkish special forces soldiers, left after the arrival of dozens of members of the Turkish counterterrorism forces. As Erdoğan watched, men scoured every corner of her apartment. Erdoğan, who is not related to the Turkish President, Recep Tayyip Erdoğan, was informed that she was going to be charged with supporting terrorism. The basis for the criminal case, she was told, was her five years of writing articles and serving on the advisory board of a daily newspaper, Özgür Gündem, which the Turkish government said was linked to the outlawed Kurdistan Workers’ Party, and which was shut down in 2016 but later reëmerged under a different name. After spending seven hours searching through the thirty-five hundred books in Erdoğan’s home library, the officers took six books on Kurdish history with them as evidence.

“Later, the judge asked me about those books,” Erdoğan recalled in an interview earlier this month, in Istanbul. “Is it a crime to read about Kurds in this country? Aren’t they a part of this nation? Not to read about them should be a crime,” she said, as she calmly smoked a cigarette.

When Erdoğan was arraigned before a judge and told the charges she faced, she fainted. She was charged under Article 302 of the Turkish penal code: disrupting the unity and integrity of the state. She was held in solitary confinement for the next five days—the first two of which she was deprived of water—and then jailed with other female prisoners. On Erdoğan’s hundred and thirty-third day in prison, she was given her first opportunity to defend herself in court. Looking thin and tired, she delivered a statement to the judge hearing her case: “I will read my testimony as if there is still rule of law in this country,” she declared. The courtroom microphone was off, though, and the journalists present could barely hear her. Later that night, Erdoğan was released from the Bakırköy state prison, in Istanbul, to a cheering crowd of family and friends. She is out of prison but barred from travelling outside the country, and her trial resumed last week. It was her fourth court appearance since December. She faces a life sentence if convicted.

In a separate trial that began last week, seventeen journalists stand accused of serving as the media arm of the failed July, 2016, coup. They include Ahmet Altan, age sixty-seven, a prominent novelist and journalist; and his younger brother, Mehmet Altan, sixty-four, a distinguished academic and the author of forty books. Prosecutors initially accused the Altans of sending “subliminal messages” to the plotters of the failed coup. “It was the first time in my career that I heard this term,” their lawyer, Veysel Ok, told me, smiling. “It was probably so for the prosecutor who wrote the indictment as well.”

All told, the brothers have spent nearly three hundred days in jail awaiting trial. Based on the charges currently filed against them, the brothers each face three life sentences if convicted. They stand accused of “attempting to overthrow the Turkish Grand National Assembly,” “attempting to overthrow the Government of Turkey,” “attempting to abolish the constitutional order,” and “committing crimes on behalf of an armed terrorist organization without being a member.” Prosecutors are using phone records, and articles the Altans wrote about various topics, among other things, as evidence against them. The oldest article dates back to 2012, four years before last summer’s failed coup. After five consecutive days of hearings, the judge ruled last Friday to continue the pretrial detention of all defendants. The trial is adjourned until September 19th.