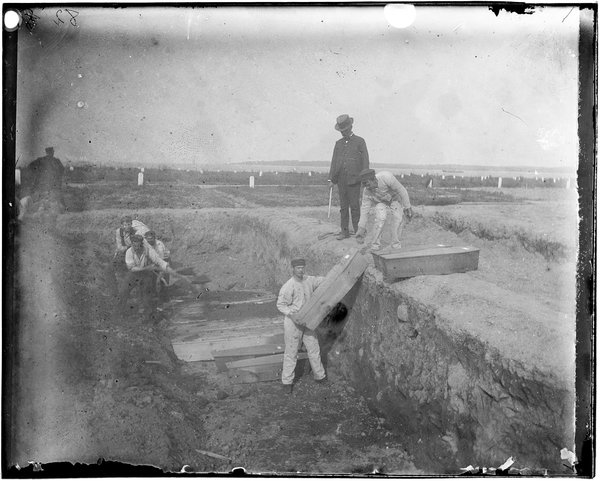 Over a million people are buried in New York city’s potter’s field on Hart Island. Writing for the New York Times, Nina Bernstein uncovers some of their stories and the failings of the system that put them there:

Twice a week or so, loaded with bodies boxed in pine, a New York City morgue truck passes through a tall chain-link gate and onto a ferry that has no paying passengers. Its destination is Hart Island, an uninhabited strip of land off the coast of the Bronx in Long Island Sound, where overgrown 19th-century ruins give way to mass graves gouged out by bulldozers and the only pallbearers are jail inmates paid 50 cents an hour.

There, divergent life stories come to the same anonymous end.

No tombstones name the dead in the 101-acre potter’s field that holds Leola Dickerson, who worked as one family’s housekeeper for 50 years, beloved by three generations for her fried chicken and her kindness. She buried her husband as he had wished, in a family plot back in Alabama. But when she died at 88 in a New York hospital in 2008, she was the ward of a court-appointed guardian who let her house go into foreclosure and her body go unclaimed at the morgue.

By law, her corpse became city property, to be made available as a cadaver for dissection or embalming practice if a medical school or mortuary class wanted it. Then, like more than a million men, women and children since 1869, she was consigned to a trench on Hart Island.

Several dozen trenches back lies Zarramen Gooden, only 17 when the handlebars of his old bike broke and he hit his throat, severing an artery. He had been popping wheelies near the city homeless shelter in the Bronx where he and four younger siblings lived with their heroin-addicted mother. With no funeral help from child protection authorities, his older sister scraped together $8 to buy the used suit he wore at his wake. But the funeral home swiftly sent him back to the morgue when she could not pay the $6,000 burial fee.

For Milton Weinstein, a married father with a fear of dying alone, there was no burial at all for two years after his death at 67. A typographer in his day, he had worked in advertising for Sears, Roebuck & Company. But he lost his career to technology and his vision to diabetes; his wife’s mental problems drove their children away. Though she was at his side when he died in a Bronx nursing home, she had no say over what happened to his remains — and no idea that his body would be used as a cadaver in a medical school and then shoveled into a mass grave on Hart Island.

New York is unique among American cities in the way it disposes of the dead it considers unclaimed: interment on a lonely island, off-limits to the public, by a crew of inmates. Buried by the score in wide, deep pits, the Hart Island dead seem to vanish — and so does any explanation for how they came to be there.

To reclaim their stories from erasure is to confront the unnoticed heartbreak inherent in a great metropolis, in the striving and missed chances of so many lives gone by. Bad childhoods, bad choices or just bad luck — the chronic calamities of the human condition figure in many of these narratives. Here are the harshest consequences of mental illness, addiction or families scattered or distracted by their own misfortunes.

But if Hart Island hides individual tragedies, it also obscures systemic failings, ones that stack the odds against people too poor, too old or too isolated to defend themselves. In the face of an end-of-life industry that can drain the resources of the most prudent, these people are especially vulnerable.

Indeed, this graveyard of last resort hides wrongdoing by some of the very individuals and institutions charged with protecting New Yorkers, including court-appointed guardians and nursing homes. And at a time when many still fear a potter’s field as the ultimate indignity, the secrecy that shrouds Hart Island’s dead also veils the city’s haphazard treatment of their remains.

These cases are among hundreds unearthed through an investigation by The New York Times that draws on a database of people buried on the island since 1980. The records make it possible for the first time to trace the lives of the dead, revealing the many paths that led New Yorkers to a common grave.