My celebrity accumulated like a kidney stone:
children, pets, even some corvids recognised me
so it was time for my appointment at the wax museum.
I was to be measured and charted with lasers and calipers,
from the depth of my philtrum to the balls of my feet.
Finally, the fellow admired The ears like little queries,
he said, What do you think about that!
Just then the Director of the museum, a man
with no more scruples than a cat o’ nine tails has pulses,
entered to inspect his investment.
Very expensive, he grumbled, footfall, overheads,
gallons of Japanese beeswax, apiarists’ strike in Osaka
and I passed the time naming the counties of Ireland.

When it was December, I came in to view
my likeness the night before its exhibition.
There was a little party. Because I loved myself
I had plenty of wine and made my acquaintance.
Every detail was present: itchy Velcro hooks of stubble,
pink threads of blood vessels in the sclera.
I had the sensation of looking in a mirror about a year ago.
After an hour or so I pretended to quarrel with myself
and the long and short of it is that the model went over
and broke off at the waist. It was accidental.
The Director exploded like a good break in a great game of pool.
I’d be arrested, prosecuted, fined, executed unless
we came to some sort of arrangement. I had no choice.
It hasn’t been easy learning to stand perfectly still
but from 10 until 6 each day, I do in the East Wing.
The days are long but the evenings are mine.
This is why my eyes are so glassy, this is why my legs are so sore. 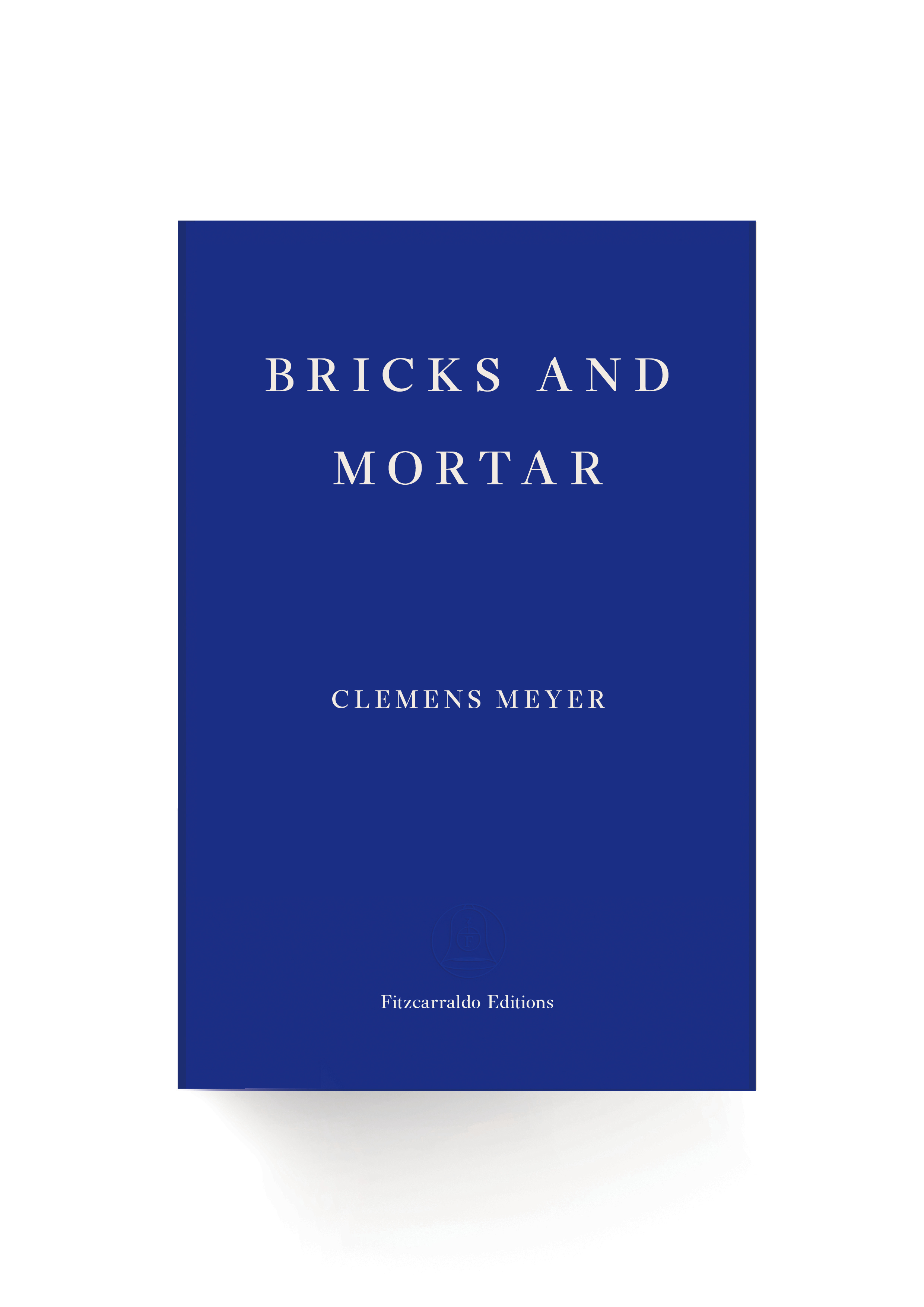 Translating a book title is rarely an easy feat. Think of Die Verwandlung, rendered as either Metamorphosis or The Metamorphosis – do we need that definite article or not? The first two translations into German of Crime and Punishment were entitled Raskolnikow, followed by many called Schuld und Sühne (meaning something like “guilt and atonement”), then in the 1920s a couple of Verbrechen und Strafe (“crime and punishment”), then a spate of either Raskolnikow or Schuld und Sühne or variations on the two, and back to Verbrechen und Strafe in Svetlana Geier’s most recent iteration from 1994. The shorter and more meaningful a statement, the more difficult it can become to capture it faithfully in another language. And there are few short statements that hold more meaning than book titles.

Clemens Meyer’s Im Stein is one of those conundrums. It’s a long novel, 654 pages in English, with a short title. Two words, two strong beats, not a common phrase but immediately clear. The literal meaning is easily rendered: in the stone. But to my mind, the obvious choices rock and stone are tainted words in English, hackneyed and dulled by overuse in popular culture:

The Sword in the Stone

Between a rock and a hard place

Rock around the Clock

And so on, very possibly ad infinitum.

I knew I didn’t want either of those words to anchor my translation, to drag it down from vaguely mystical to banal. But what to do? The novel plays on different kinds of stone – the bedrock of the city in which it’s set, gemstones, brick walls – all of which can be called “stein” in German, at least in the elastic way that Meyer uses language. For a while, the working title was Hearts Like Diamonds, a phrase used frequently in the book to sum up women working in prostitution. I liked that it brought those women into sharp focus, but it had the distinct disadvantage of sounding like a romance novel. Which the book is not, by a long shot.

One of the less literal meanings with which Meyer imbues the word Stein is that of real estate. If the novel has a main character other than the city itself and the rock being drilled into beneath it, then it’s AK, a football hooligan turned property magnate who lets apartments to prostitutes. It’s his move into “bricks and mortar” that takes him from providing security services for the sex trade – muscle – to providing shelter and infrastructure – stone, if you like. And that was the mental leap I needed. Once I hit on it, I went back through the translation to sow seeds for my title, adding flourishes to the prose where I felt it could take it. This is the kind of writing that can take it, so we now have sentences like this:

The music echoes across the bricks and mortar, through the rock and stones.

And if you think back to those years between time and stream, between bricks and mortar, between rock and hard place, there’s no way back and that’s a good thing too, even though things are hotting up again now; there weren’t any apartments or luxury girls back then, or as good as none.

The markets and marketplaces are becoming more and more linked, steel and concrete town halls, the meat markets expanding, the bricks and mortar, sticks and stones, the rock growing, in a red-lit circle where everything’s linked, the rubbish truck, the fat woman, the Coke, the Viagras, the blockers, uppers and downers, lost cats, the right to sexual self-determination, scraps of memory like old police badges, the Angels on their motorbikes, peat mosses, flyovers, sixty-six municipal brothels in 1865, trade chronicles, he burrows in the old files, real estate on silver strings leading all the way to Italy, and the fall of the real-estate boss Silvio Lübbke, three bullets, boom, boom, Dead Peepers Alley, houses for pocket money, clues, clues, the country air so clean and pure, soon they’ll be building here but we’ll stop the diggers, the question is, who brings three bodies out to this mire, this swamped puddle, where everyone knows they won’t decompose, when you can dig holes in the sandy ground of the heath or drive out to forest lakes like the ‘Blue Eye’, and there must be anglers there who discover the remotest of lakes, the woods arching around the north-eastern belt of the suburbs and incorporated villages to the south, all of it flat as a pancake.

Clemens himself still isn’t keen because there are other books with the same title, so this piece is partly a defence of my choice. But I stand by it, for several reasons. Firstly, the stone is still there under the surface, even though it’s now clearly manmade, one meaning standing in for all the others. The phrase is something I can imagine all of the book’s characters using, something earthy and real. More important though is the sound: it still has two beats, Bricks and Mortar. Still short and sharp – a trochaic rhythm, I’m told. And when I pronounce my title – and it feels like my title, because I had to fight for it a little bit – it comes out in my accent, which is from London, and I hear a secret echo of rhyming slang concealing one woman, at least. There’s a daughter gone missing in the book, too, and so my title is for her.