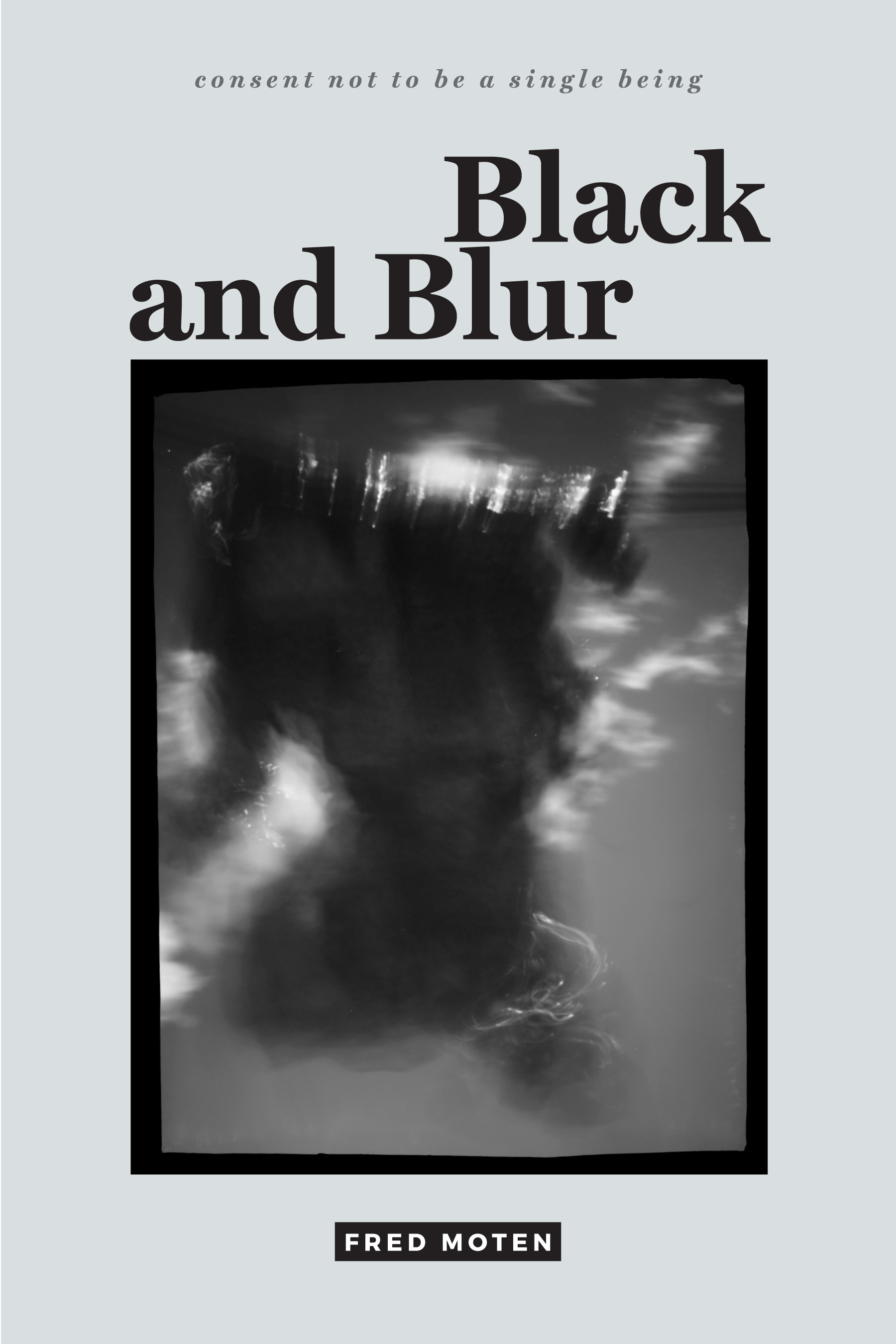 Because I know Moten in a world that opposes entanglement and clear-sightedness, this must technically be a “response” rather than a “review” of Black and Blur. (The book is the first of three to be published as the consent not to be a single being series, a phrase borrowed from Édouard Glissant; two companion volumes, Stolen Life and The Universal Machine, are blessedly, impossibly, soon to follow.) And thank God this isn’t a review, really, because how preposterous and off the cake it would feel, at least for me, to drag Black and Blur into the world of appraisal or evaluation of argument. Others can do that, and do it well. It’s not that I’m not interested in Moten’s contributions and interventions into ongoing, crucial discussions about the relation between, say, as he puts it, “the critical analysis of anti-blackness to the celebratory analysis of blackness.” I am, and deeply so. As Moten intimates in Black and Blur’s preface, that relationship is, in some sense, what it’s all about: “It hurts so much that we have to celebrate. That we have to celebrate is what hurts so much. Exhaustive celebration of and in and through our suffering, which is neither distant nor sutured, is black study.” (As in the opening of 2003’s In the Break: The Aesthetics of the Black Radical Tradition, Moten locates this foundational interdependence in the work of scholar Saidiya Hartman: “In the Break also began with an attempt to engage Hartman; as you can see, I can’t get started any other way.” Indeed, it’s Hartman’s theorization of “the diffusion of terror” in black expression that summons and undergirds Moten’s inquiry into the nature of that diffusion, its multiple ontological possibilities.)

Simply put, Moten is offering up some of the most affecting, most useful, theoretical thinking that exists on the planet today—a true leg out of the rut so much criticism has fallen into of pointing out how a certain phenomenon has both subversive and hegemonic effects (“kinda hegemonic, kinda subversive,” as Eve Kosofsky Sedgwick once put it) that has proven so durable since (at least) Foucault. It’s hard to write such sentences without being (happily) haunted by the fact that Black and Blur, like all Moten’s writing, disallows the kind of heroic “radical singularity” that might otherwise attach itself to the proper names of Moten’s subjects, including “Fred Moten.” (Hence the “consent not to be a single being” rubric.) As Moten writes about Black Panther Bobby Lee in Black and Blur’s final chapter: “Bobby Lee is another name we give to the xeno-generosity of entanglement: the jam, that stone gas, a block club in a block experiment, an underpolitical block party, a maternal ecology of undercommon stock in poverty, in service, genius in black and blur.” In a 2015 interview, Moten explains further, vis-à-vis Bessie Smith: “I don’t think I’m so committed to the idea of the radical singularity of Bessie Smith as I am committed to a kind of radicalization of singularity, that we now come to recognize under the name of Bessie Smith, which the figure, the avatar, that we now know as Bessie Smith was sent to give us some message about. I think of Bessie as an effect of sociality—she was sent by sociality to sociality, in that way that then allows us to understand something about how the deep and fundamental entanglement that we are still exists in relation to and by way of and as a function of this intense, radical, constant differentiation.”

As moved and impressed as I am by Moten’s writing—its spectacular range, its unending nuance, its voluminousness, its flashes of pique (don’t miss the footnote addressing British scholar Paul Gilroy on pages 293–95), its swerve and song—I’m perhaps even more inspired by its felt understanding and communication of what it means to be “sent by sociality to sociality,” and its depth of commitment to enmeshment, manifest in its style, orientation, and sound. Back in the 1980s, critic Barbara Johnson pointed out that the self-resistance performed by so many (white) male poststructuralist theorists often had the paradoxical (though altogether predictable) effect of consolidating the theorists’ authority and visibility. It’s like, given the system’s (name a system) longstanding need/desire for male genius, those dudes couldn’t even give it away. Some might argue that the ultra-passionate lauding of Moten courts a similar effect. But I’m not worried. Unlike a lot of those guys, Moten really doesn’t care about that consolidation. He really doesn’t. His work tirelessly deflects it, unravels it, renders it irrelevant and antithetical to the tasks at hand. Selflessness, for him, and for us in reading him, isn’t a new coin to spin in the marketplace of ideas. Rather, as he writes, “It’s nothing. It ain’t no thing. Selflessness ain’t about nobility or even generosity. The substance of its ethics is of no account, no count off, no one two, just a cut and then people be grooving.”