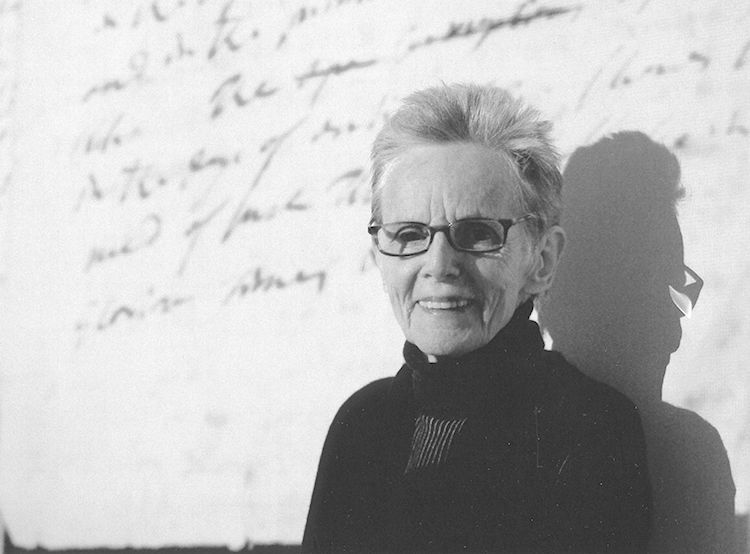 “Only art works are capable of transmitting chthonic echo-signals,” writes Susan Howe in the foreword to her new collection, Debths, inspired in part by the Whitney’s 2011 retrospective of American artist Paul Thek.

I have always been interested in folktales, magic, lost languages, riddles, coincidence, and missed connections. What struck me most was the way [Thek’s] later works, often painted swatches of color spread across sheets of newspaper with single words, phrases, or letters scribbled over the already doubled surface, transformed these so-called “art objects,” into the epiphanies, riddles, spells and magical thinking I experienced one afternoon in the old Whitney Marcel Breuer building.

Howe has long been interested in distilling signs and symbols, whether “art objects” or words themselves, into something more revelatory. Considering riddles, lost languages, doubled surfaces, spells, magical thinking, and other elusive forms of expression, Howe sounds the depths. She detects the chthonic—meaning “underworld”—echo signals reflecting off all that dwells beneath the surface. Howe’s work considers the ways in which deep histories collide and overlap in fathomless strata, replete with gaps and fissures where obscure knowledge may be found.

The poet has referred to herself as a “library cormorant,” a phrase borrowed from the poet Samuel Taylor Coleridge, who wrote, “I am deep in all out of the way books, whether of the monkish times, or of the puritanical era.”For Howe, who studied Fine Art at the Boston Museum School and arrived at literature from a non-academic background, libraries and their special collections are “Lethean tributaries of lost sentiments and found philosophies” in which one can feel “the telepathic solicitation of innumerable phantoms.” Lethean is a word of the chthonic family—Greek in origin and related to the afterlife—a reference to the river Lethe in Hades, whose water would cause dead souls to forget their lives on earth. Lethean forgetfulness is oblivion—the complete erasure of an entire world.

Howe’s use of language is particular and idiosyncratic. It snakes and branches through shared etymologies and thematic resemblances. In this Lethean quotation run two strands that are evident across the poet’s oeuvre: the material and the metaphysical. On the one hand, the notion that there are real, material histories that have been overlooked and overwritten, and that, through a sustained encounter with a primary source, one can unlock these narratives and find evidence of a lost world. On the other hand, the sense that there is another place entirely—felt but unseen and unheard—that reading and writing usher us toward. There, we might find another language entirely, one that relies on alternative approaches to making meaning and associations, and is attuned to the logic of the imaginary that eddies beneath the surface of the world we think we know. In Howe’s work, there is the sense that a written document is also an image whose inscriptions can be interpreted beyond the literal sphere. To read and to write is to make and unmake a riddle—to conjure, to speak in tongues.

Howe is a poet of the archives. She perceives and investigates the stutters and absences in the historical record, particularly in the literary artifacts we have deemed worthy to attend to and preserve. “When we move through the positivism of literary canons and master narratives,” she writes in The Birth-mark, her astonishing and incisive 1993 study of early American literature, “we consign ourselves to the legitimation of power, chains of inertia, an apparatus of capture.” In the history of literature, she asks, who and what remains unquantified? What experiences and uses of language have been deemed inexpressible or invalid? Is there another kind of sense, a different mode of narrative, buried within seemingly innocuous documents?

If you are a woman, archives hold perpetual ironies. Because the gaps and silences are where you find yourself. . . . “The stutter is the plot.” It’s the stutter in American literature that interests me. I hear the stutter as a sounding of uncertainty. What is silenced or not quite silenced. All the broken dreams.

In Spontaneous Particulars: The Telepathy of Archives (2014), a slim volume that traces how a series of documents linked by geographic place speak to each other and reflect interwoven histories, Howe writes of the “deep” text that emerges from beneath the surface of archival materials. The deep text could be read as the secret, esoteric meaning of a document, which can be apprehended in its language, as well as in haphazard markings across the page. The deep text could also be read as central to much of Howe’s own work and writerly methodologies. Moving deftly between literary criticism, historical analysis, essay, text collage, and poetry, Howe conjoins forms, one aspect of exegesis shifting seamlessly into the next. In each case, her method is not to weave together references and arguments, but to place them in proximity: connections are implied or left for the reader to cast; a text is not a straight line, but a web. This is a poetic method that urges the reader backward to the originary source of the text rather than forward toward a delimited meaning. In other words, Howe does not uncover what a text “means,” but instead asks: Where did it come from? What shared sources and affinities? What wild, untrammelled force? 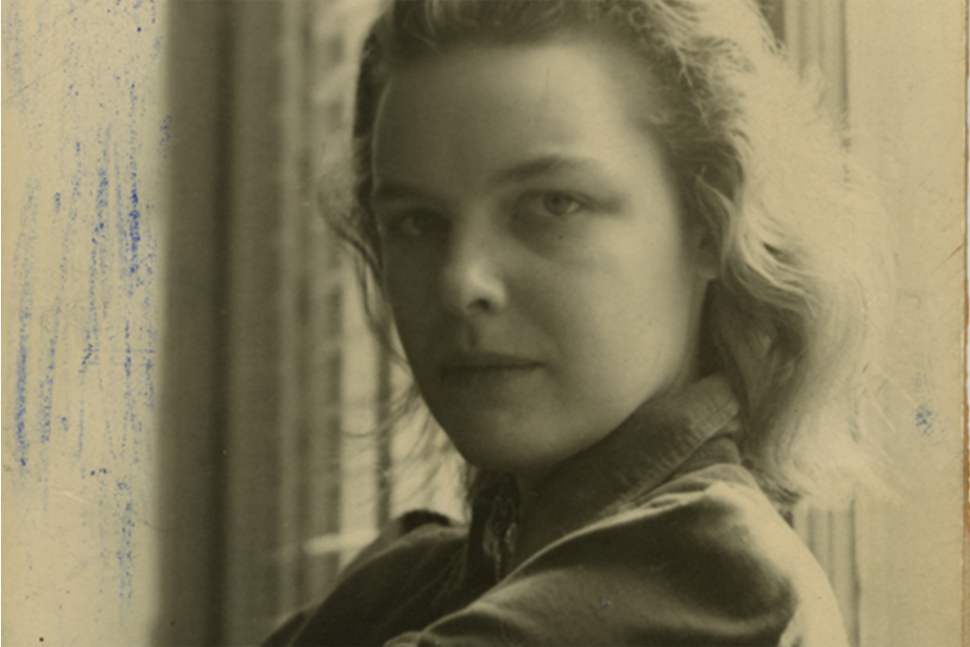 In this piece for The Paris Review – adapted from her introduction to a new collection of Joan Murray’s poems – Farnoosh Fathi asks how Murray’s poems have remained in obscurity.

“What truth, what mystical awareness can be lived,” Joan Murray wrote in a letter to her mother. Like the young Rimbaud, Murray intended to make herself a seer—what she calls, among other figures, the “Unemployed or universal Architect.” She became this architect-seer not, as Rimbaud proposed, by a total derangement of the senses but by building “the firm reality of a consciousness, consciousness in the never-ending, the great wideness that one must blend withal.” Like Emily Dickinson and Laura Riding before her, Murray belongs to a radical arc of American metaphysical women poets, most of whom still remain unsung. Her untimely death from a congenital heart condition in 1942, at age twenty-four, marked the loss of an extraordinary poet; yet Murray’s poems recalibrate the notion of a life’s work. The tragic facts only underscore the epic achievement of her vision.

Five years after her death, out of the blue woodwork of 1947, her first book of poetry was published as the winner of the Yale Series of Younger Poets Competition with the title Poems by Joan Murray: 1917–1942. W. H. Auden, who had been dissatisfied with the manuscripts he had received as a first-year judge, had reached out to Murray’s mother to inquire about the possibility of publishing her daughter’s work posthumously for the prize. Murray had been a student in Auden’s Poetry and Culture course at the New School in 1940, and her mother countered Auden’s invitation with the accusation that he had killed her daughter by inspiring her “poetry fever.” But she was devoted to her daughter’s work and eager to see it published, so agreed to the Yale edition with the condition that her friend Grant Code—a poet, Harvard lecturer, and dance and theater critic—edit the collection.

While Murray’s Poems received mostly laudatory reviews in Poetry, the Saturday Review, the New York Times Book Review, and The New Yorker, it soon fell into obscurity and remained out of print for more than fifty years. I first learned about the collection in 2006, thanks to the poet Shanna Compton, who posted an invaluable pdf of it on the PhillySound blog’s Neglectorino Project, a series on neglected writers started by the poet CAConrad. In a note to the pdf, Compton writes, “Despite the untimely death of the author, the flawed editorial work, and the fact that the book has been out of print for decades, Murray has managed to earn something of an underground reputation.” How was it possible that Murray’s poems—with their wild and unwavering authority, their singular metaphysics of a migratory American psyche, one unburdened by any formal or aesthetic “schooling” and the clearest evidence we’ve ever had of the visionary nature of youth, what George Eliot averred of the young Teresa of Ávila whose “passionate nature demanded an epic life” and who found her epos in poetry—how could these poems be so totally unknown?

Ocean Vuong on his most reread books, current projects, and being part of  ‘a great river of language’:

Is there a book you wish you had written?

No, if it’s good and beautiful and already made, what difference does it make if I had written a certain book or not? I have been trying to interrogate the notion of art-making as possession and conquest. This idea of creation as possession can lead to envy and bitterness—which is a total buzzkill to creativity.

As a writer, I feel more potent and powerful when I see myself working in a great river of language, one that has been running before me and will continue after me. In this window of time we call a life, I get to add to that river. That’s kind of cool I think. To walk into a party (sorry, new metaphor), say a bunch of super emotional stuff, then be like: “Thanks for listening, guys, but I have to go feed my dog, Susan—he’s diabetic,” then climb out the window, down the fire escape, and fade into the night.

What’s the book you reread the most?
One Big Self by C.D. Wright, Slow Lightning by Eduardo C. Corral, and Jesus’s Son by Denis Johnson.

Name a classic you feel guilty about never having read?
Pride and Prejudice. And like 50 others.

What’s the new book you’re most looking forward to?
Hieu Minh Nguyen’s Not Here (Coffee House Press, 2018) is a book I brace for, in awe and relief. His work is so tight, searing, and unabashedly sharp and full at once. His poems turn me into a horizontal entity. Reading them, I have to lie down. They remind me of gravity, how it pins me to the world without ever touching me. Hieu’s work is like that. A kind of force. Or better yet, a force of kindness.

What are you currently working on?
I’m writing a novel composed of woven inter-genre fragments. To me, a book made entirely out of unbridged fractures feels most faithful to the physical and psychological displacement I experience as a human being. I’m interested in a novel that consciously rejects the notion that something has to be whole in order to tell a complete story. I also want to interrogate the arbitrary measurements of a “successful” literary work, particularly as it relates to canonical Western values. For example, we traditionally privilege congruency and balance in fiction, we want our themes linked, our conflicts “resolved,” and our plots “ironed out.” But when one arrives at the page through colonized, plundered, and erased histories and diasporas, to write a smooth and cohesive novel is to ultimately write a lie. In a way, I’m curious about a work that rejects its patriarchal predecessors as a way of accepting its fissured self. I think, perennially, of Theresa Hak Kyung Cha’s Dictée. This resistance to dominant convention is not only the isolated concern of marginalized writers—but all writers—and perhaps especially white writers, who can gain so much by questioning how the ways we value art can replicate the very oppressive legacies we strive to end.

I’m also working on riding my bike with no hands. I’m getting really close. The other day I made it half way down my block without touching my handlebars. My goal, by the end of the year, is to ride my bike to a friend’s house while carrying, with both hands, a pink box of vegan cupcakes. I’m optimistic. But who knows—we’re in the Trump era after all.

This all sounds terribly pretentious (no-hands cupcake delivery included). But I believe in it. So I’m gonna try my best.