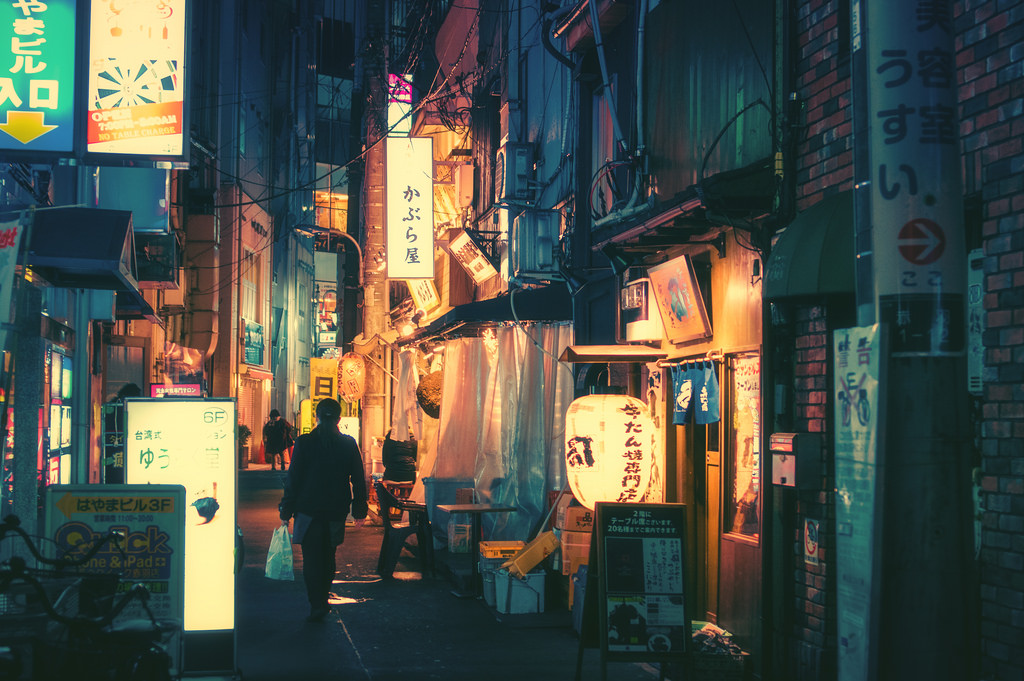 In the LA Review of Books, Colin Marshall travels to Tokyo to revisit the city 50 years after Roland Barthes’ Empire of Signs:

ROLAND BARTHES FIRST VISITED Japan in 1966, not long after the defeated and reconstructed country announced its return to the international community with the 1964 Summer Olympics in Tokyo. Japan would have hosted its first Olympic Games there in 1940, had World War II not caused the duty to pass to Helsinki. Now, half a century after the semiotician from Cherbourg walked its streets, the Japanese capital prepares for its second Summer Olympics in 2020, in hopes of signaling another reemergence: not from wartime devastation by the most advanced weapons known to man, but from the long hangover of the postwar economic bubble, burst in the 1990s, and the subsequent “lost decade” now turning into a lost quarter century.

By most economic and demographic indicators, Japan has long looked like a country in trouble, even though a foreign visitor sees signs of robust health everywhere: a refined and efficient service culture; reliable infrastructure; conspicuous displays of high technology; shops filled with an astonishing amount and variety of carefully designed products; lively packs of uniformed schoolchildren, the smallest of whom ride on the back seats of their mothers’ bicycles. The aftermath of 2011’s Tōhoku earthquake may have exposed deep and previously unsuspected societal frailties, and yet, on every one of my trips to Japan I marvel at all those well-put-together moms calmly biking their kids to school. Surely they indicate an achievement of which the rest of the developed world, no matter its wealth, can only dream — even if on paper the country itself looks about to lie down and die.

As a pioneer in the study of signs and symbols, Barthes would have enjoyed grappling with all the conflicting signals sent out by 21st-century Japan. He lived through most of the postwar years when the Japanese economy grew at an unprecedented rate, but he missed the downright grotesque inflation of Japanese asset prices in the decade after his death in 1980. By then the West, and especially the United States, nervously fixated on images of flush Japanese tourists landing in Hawaii and buying mansions in cash, sharp-suited Japanese businessmen lavishly entertaining on sinisterly vast expense accounts, and Croesan Japanese conglomerates snapping up Los Angeles’s movie studios and downtown high-rises.

Japan gave off few such signs in 1966, when Barthes accepted an invitation from his friend Maurice Pinguet, Director of the Franco-Japanese Institute in Tokyo, to teach a seminar there on the structural analysis of narrative. That stay in Japan, followed by two more that year and the next, provided Barthes with the material for 1970’s slim but rich monograph L’Empire des signes, which came out a dozen years later in Richard Howard’s English translation as Empire of Signs. “I am not lovingly gazing toward an Oriental essence,” Barthes, rooted in a monoculture of his own, assures us early in the book. “[T]o me the Orient is a matter of indifference, merely providing a reserve of features whose manipulation — whose invented interplay — allows me to ‘entertain’ the idea of an unheard-of symbolic system, one altogether detached from our own.”

Barthes traveled throughout his professional life, but not all his travels — Oriental, Occidental, or otherwise — suggested equally fruitful premises for writing. His Carnets du voyage en Chine, finally published in English just four years ago as Travels in China, records little more than disappointment with a culture “not at all exotic, not at all disorientating,” in which he finds next to nothing “to note down, to enumerate, to classify.” In Japan, by contrast, he finds a seemingly inexhaustible trove of exotic and disorienting material to note down, enumerate, and classify.