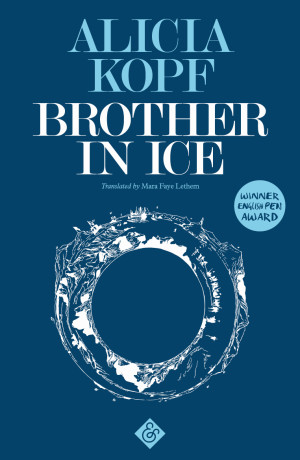 An excerpt from Alicia Kopf’s Brother in Ice (translated from the Catalan by Mara Faye Lethem and published by And Other Stories) is featured in Granta 142: Animalia.

The penguins of the Antarctic were a new discovery for the explorers, who began filming them in the early twentieth century. Everyone was soon taken with the sweet creatures; people wanted to see images of the playful penguins. But if you’ve seen Encounters at the End of the World, by Werner Herzog, you’ll know that sometimes a penguin will voluntarily separate from the group and head in the opposite direction, away from the sea, toward its death.

There’s a store downstairs on the street level that sells frozen foods. The cashier is tall, blond, stocky. He reminds me of Amundsen, the explorer.

The Sherpas and the Inuit have similarities. The former reach the summit every day, the latter helped everyone discover the North Pole.

The mountaineer Ferran Latorre gave up on his ascent of Everest in order to rescue a sick Sherpa.

When I was little, my mother worked in a small-town school. Its playground was the woods. Once I saw a bunny nestled among the roots of a tree. But it wasn’t one of the typical rabbits that camouflage themselves amid the brown tones of the Mediterranean landscape; it was a white rabbit. When I got closer I saw that it was quite big; stock-still, it stared at me with its red eyes. It let me pick it up and I realized it was panting. I decided to take it to the vet, but on the way there, in the car, it died.

Death by freezing is called sweet death, or white death. It is somehow linked to sleep, because of their apparent likeness, as opposed to the violence of a death by fire. Those who’ve seen it up close say that there’s nothing sweet about an icy grave; freezing is as terrible a death as burning.

Yet ice retains the body’s shape the way images do; it is like photographs. Photography is to its subject as ice is to the interred explorer: a thanatological process that presents us, abruptly, with a body from the past.