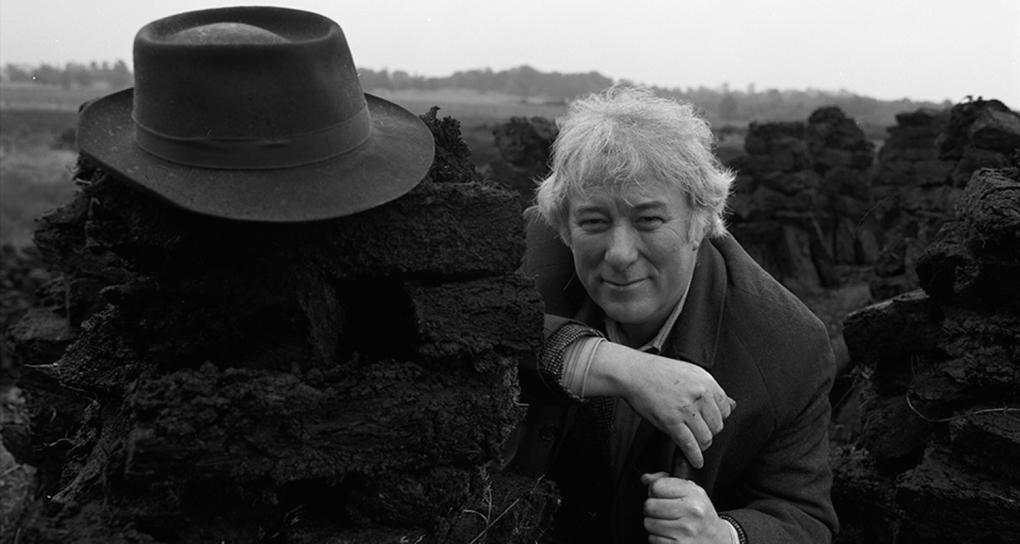 In this 2006 Guardian piece, James Campbell talks to Seamus Heaney about growing up on a farm in County Derry, politics and his project inspired by a 15th-century Scots poet:

In 1977, Seamus Heaney visited Hugh MacDiarmid at his home in the Scottish borders, when the great poet and controversialist was in the final phase of life. MacDiarmid had been overlooked by the curators of English literature: compiling the Oxford Book of English Verse, Philip Larkin asked a friend if there was “any bit of MacD that’s noticeably less morally repugnant and aesthetically null than the rest?” Heaney, who has always felt at home with Scots vernacular takes a different line. “I always said that when I met MacDiarmid, I had met a great poet who said ‘Och’. I felt confirmed. You can draw a line from maybe Dundalk across England, north of which you say ‘Och’, south of which you say ‘Well, dearie me’. In that monosyllable, there’s a world view, nearly.”

In a literary career that spans 40 years, Heaney’s appointed subject matter has been largely extra-curricular: Irish nationalism, “Orange Drums”, the sod and silage of his father’s 45-acre farm at Mossbawm, County Derry. In 1999, he took the Anglo-Saxon poem Beowulf and hammered it into a weathered English, which sold in astounding quantities and won the Whitbread Book of the Year Award. However, it is “the twang of the Scottish tongue”, audible throughout his Derry childhood, particularly “over the Bann in Country Antrim”, that has given him his current project, a modern English account of the work of the 15th- century Scottish makar Robert Henryson. Last year, the small Enitharmon Press published Heaney’s retelling of Henryson’s Testament of Cresseid – praised by Bernard O’Donoghue in the TLS as “a poem which is unmistakably his own” – and he is now engaged on the same poet’s witty, homely Fables, with one eye on a new book and another on dramatic recitation.

“I read Beowulf at the Lincoln Center in New York, and a woman said to me, ‘You should do something that actors could do’. And I thought right away of Henryson’s Fables. Billy Connolly would be the ideal speaker. I’d seen him in the film Mrs Brown and I thought that if he stood up and read this stuff – ‘The Two Mice’, for example: ‘Still, being soothed so sweetly, she got up / And went to table where again they sat, / But hardly had they time to drink one cup / When in comes Hunter Gib, our jolly cat’ – he has enough insinuation and intelligence to help bring it within reach of a modern readership. These things are popular, they’re talkable, they’re full of horse sense and roguery.” The limited edition of The Testament of Cresseid apart, his Henryson exists mainly in typescript. He is planning a recital on stage for this year’s Edinburgh Festival.

The only books in the farmhouse at Mossbawm, County Derry, where Heaney grew up in the 1940s, resided “on a high shelf – a dictionary, an algebra and other things I don’t know what. They belonged to an aunt who had done a clerical course and became known in the family as ‘Susan Heaney, a typewriter in London’, where she had gone before the war. The book house, for me, was my Aunt Sarah’s. She had sets of Kipling and Hardy, which she had bought as a young schoolteacher, and which I now have.” Their shared name and initial, “S. Heaney”, decorate the inside leaf, which tickles him. “On Saint Patrick’s Day, a gathering of men would come to the house. There would be some drinks and singing and recitation. So there was a certain sense of ritual enjoyment, but nothing that resembled high culture, no.” His mother was “very devoted to singing and Scottish songs, though she wasn’t a singer herself”, his father “didn’t particularly like music”.

In “The Famous Seamus”, a sometimes tart but truly affectionate profile of Heaney that raised eyebrows when it was published in the New Yorker in March 2000, his lifelong friend Seamus Deane wrote that the very act of bestowing the Celticised Christian name on a boy in Northern Ireland was “a signal” that a family “was loyal to the Gaelic, and not the British, account of things”. This account – related to what Heaney has called “the Catholic imagination” – is something to which Heaney pledged loyalty in the opening lines of his first book, Death of a Naturalist (1966), “Between my finger and thumb / The squat pen rests; snug as a gun”, even if history has given them a more emphatic ring than the poet foresaw. He and Deane were fellow pupils at St Columb’s College, a diocesan grammar school for boys from the city of Derry and its surrounding farmlands. The country Seamus was a boarder, the town Seamus a sophisticated day boy. With a fond jab in the bumpkin ribs, Deane remarks that the boarders talked so slowly, “Maghera and Magherafelt … with all their ‘gh’s squatting on the wide vowels … that sometimes you thought a sentence had been spoken when in fact only a place-name had been”.