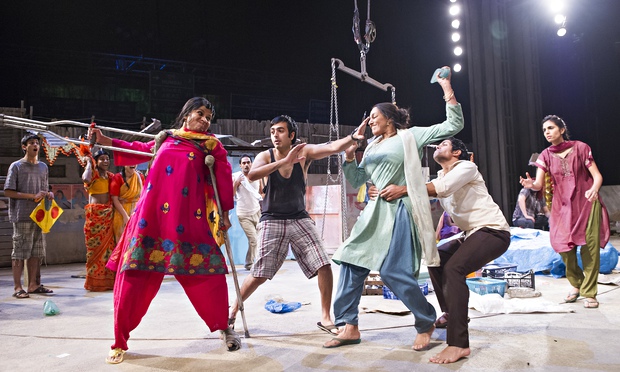 Katherine Boo’s excellent Behind the Beautiful Forevers, an account of life in a Mumbai slum, has been adapted for the stage by David Hare. (Here’s Pankaj Mishra’s 2012 review of the book, too.)

In a National Theatre rehearsal room, a stagehand is dumping a hundred or so empty plastic water bottles from a bin liner onto the floor. Set dressing tends to be a bit more fastidious, even decorous. The main reassurance that this isn’t theatre being done on the cheap is the presence of playwright Sir David Hare, artistic director elect Rufus Norris and the esteemed actress Meera Syal.

For 20 minutes, Syal leads the cast of 25 South Asian actors in a run-through of the National’s forthcoming epic, Behind the Beautiful Forevers. It is perhaps the biggest play about waste ever mounted.

The source material is a remarkably powerful book by Katherine Boo, a New Yorker journalist who spent more than three years meticulously documenting lives in Annawadi, a teeming slum in the shadow of Mumbai airport. Behind the Beautiful Forevers was published simultaneously in the US and India in 2012, was widely hailed and won numerous awards: it shone a torch on endemic corruption and abject poverty, refusing to sentimentalise its subjects while giving them their humanity: Boo’s Annawadians quarrel and joke, strive and connive like the rest of us, but with a much shorter life expectancy.

The book was bound to journey away from the page and the first person to pounce and option it was the omnivorous New York producer Scott Rudin. He gave the idea of staging it to Hare, who for Rudin had adapted Michael Cunningham’s novel The Hours. But Boo was not initially persuaded.

“I just wasn’t sure what it would be like to fictionalise lives,” she says. “I was uncomfortable with it. But then other people in my life said, ‘You’re being silly, these are very serious people with interesting points of view.’ I thought, I need to know what the people who are in my book think about this.”

So she went to Annawadi and asked around. She remains a frequent visitor anyway — she went eight times in 2013. And she found that the characters in her book — the ones who are still alive, that is – were keen.

“In some way they found the idea of theatre more accessible than a book, because many of the people I wrote about were illiterate or semi-literate.”