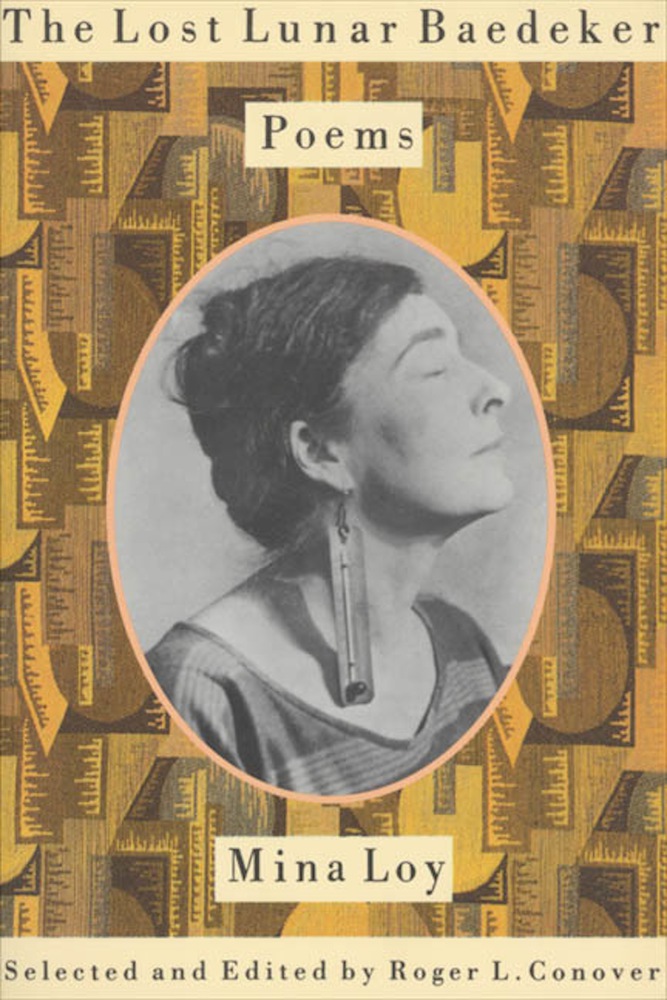 Natalie Eilbert on The Lost Lunar Baedeker: a collection of Mina Loy’s poems published in 1996.

There is a habit in poetry to call poets of a certain opacity, ‘difficult’. Poets like Mina Loy often get unfairly categorized this way, which only demonstrates the failure of imagination presided over by vogue trends in poetry. If you are looking for a narrative-lyric, follow the strain of Plath. Mina Loy is an entirely different descendent, a distillation of Dickinson, a rogue sibling of Apollinaire. It isn’t that she is difficult so much as our minds have been trained toward the center, and hence, more narrative throughlines. It is as Loy tells us in the first poem of her book, The Lost Lunar Baedeker, ‘tame things / Have no immensity’.

With the transparency of first-person narrators up for furious debate, it should be noted that Loy’s biography is somewhat irresistible. Sure, she palled around with Gertrude Stein, Marcel Duchamp, Man Ray, T.S. Eliot, Djuna Barnes and the usual Paris suspects. With Duchamp, she orgied in Greenwich Village, according to editor Roger L. Conover; she also renounced the establishment by sewing her own clothes and disrupting the Futurism movement’s fascist momentum with her own feminist futurist manifesto, and in so doing, predicted a Weinstein-era violence for the future women of the world who followed status quo: ‘Professional & commercial careers are opening for you—Is that all you want?’ And so, as World War I cooked up, Mina Loy spent her time queering the Lady out of the body, flipping off mainstream politics, and presenting us grounds to abandon society in favor of the Loy Feminist Manifesto.

That is before we even encounter her poetry. Loy as persona and Loy as post-mortem text operate with enormous distinction. Whereas Loy famously proclaimed, ‘I was never a poet’, Loy is someone I consider a Super Poet, one whose bewilderment grew equally out of sui generis language as much as cultural disavowal. While T.S. Eliot had his lines segmented and preened by Ezra Pound, Mina Loy freely deployed words like ‘semieffigy’, ‘sialagogue’ and ‘agamogenesis’ with the whim of an un-lanterned genie. (In fact, in a letter to Marianne Moore, Pound wrote, ‘Is there anyone in America except you, Bill [William Carlos Williams], and Mina Loy who can write anything of interest in verse?’ Sorry about that, TS.) (Loy was English but her poetics make good prosaic sense when conceived of through the American canon.) It is in the selected work, The Lost Lunar Baedeker, that we chance to sit in the incubation chamber with Loy, if we dare.

It should be noted that in my back and forth with Granta editor Eleanor Chandler, part of the misfortunes of women in the arts reveals itself: It is hard to place editions and chronology with Loy’s collected and selected bodies of work. When Lunar Baedecker [sic] was published in its 1923 heyday in Paris, it existed only until it went out of print. As the editor terms it, her being ‘unassimilable by the canonists’ meant being fortressed into her era, as her work never cottoned to the zeitgeist. She ventured in our imagination more as a sorceress than a genius, as the mythopoetic experiment of woman is wont. Versions of the book have been republished as collected volumes in 1982 and 1991, but the editor of 1996’s The Lost Lunar Baedeker, Roger L. Conover, curated the poems in this volume with careful deliberation, changing the name to reflect his editorial quest for Mina Loy. On this point, he offers us some background into the publication history for us to chew through, ‘four minutes to the millennium’ that are still all-the-more poignant:

Loy has a chance to rise above neglect. But in order to read her, we not only have to get past neglect, we have to get past legend. And this may prove more difficult, for legend has a way of insinuating itself upon neglect. I first edited Loy’s work in 1982. At the time, publishing her work felt more like a cause than an editorial occasion. The Last Lunar Baedeker circulated like a secret handshake, and has since become part of the Loy myth . . . These stories should neither elevate nor diminish Loy’s stature as a poet. She should first be apprehended at poem-level.

The Lost Lunar Baedeker is divided into five sections – the first four are chronological of her life as a poet, and the fifth section is drenched in the kind of revolutionary prose that keeps a good radical from the middle. (Theresa Hak Kyung Cha’s Dictee, another book I considered for this series, revolutionized the novel through her subversive, unorthodox structure.) Ensnared in this book, you encounter neologisms and Latinate medical components turned adjectival in use. ‘Being an incipience’, she writes in the winsome poem, ‘The Effectual Marriage, or THE INSIPID NARRATIVE of GINA AND MIOVANNI’,

a correlative
an instigation of the reaction of man
From the palpable to the transcendent
Mollescent irritant of his fantasy
Gina had her use   Being useful
contentedly conscious
She flowered in Empyrean
From which no well-mated woman ever returns.

It’s dizzying, dense and feminist as hell. She wrote this between 1914 and 1920. In ‘Apology of Genius’, she will tell us, on women suffering the passions of men, ‘Our wills are formed / by curious disciplines / beyond your laws.’